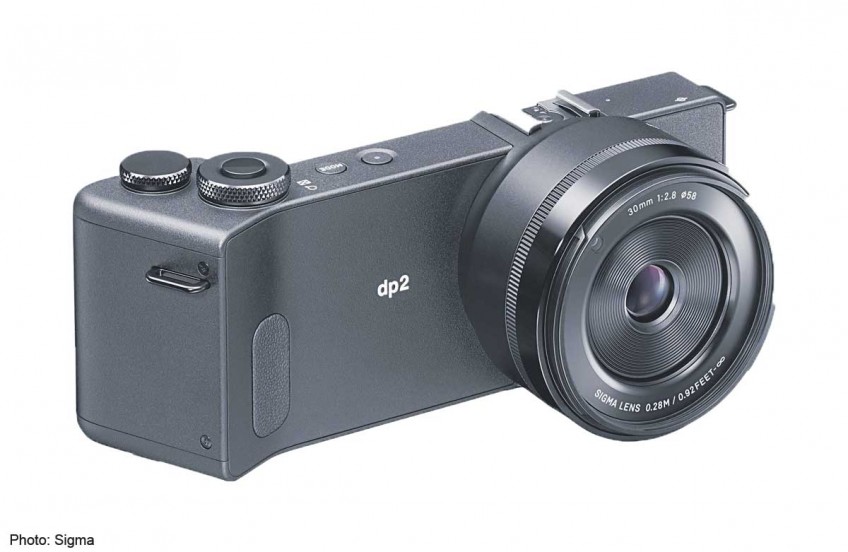 The unusual design of Sigma's dp2 Quattro caused quite a stir when it was unveiled in February during the annual camera and imaging show CP+ 2014 in Yokohama, Japan.

The dp2 is the second in Sigma's latest series of digital compact cameras, which comes with the new-generation 19.6-megapixel, Foveon X3 image sensor known as Quattro.

Except for the fact that they all have different lenses, the three cameras look very much alike. Each has a 3-inch 920,000-dot LCD screen and the same Foveon X3 Quattro image sensor.

This image sensor differs from conventional ones in that it uses three layers of sensors - red, green and blue - stacked on top of one another.

This allows it to capture the real, full colour of subjects. Conventional image sensors have red, green and blue colour sensors arranged side by side in one layer.

This arrangement is supposed to improve image processing speed and noise performance.

So, while Sigma pumps up its image sensor to 29.4 megapixels in marketing brochures, the Quattro image sensor actually produces images in 19.6 megapixels.

Best to use both hands

It is the outward appearance of the dp2 that most will first notice. It has an elongated body with an angled hand grip. Most camera hand grips are contoured outwards in front of the camera for users to wrap their fingers around them easily.

For the dp2, its hand grip protrudes inwards towards the user, with only a small rubber padding in front and a larger rubber padding in the thumb rest area. Despite the strange design, the grip is quite comfortable.

On the downside, the weight distribution is uneven when you use the camera with one hand. It is best operated with both hands.

The biggest downer is actually its size. Earlier Sigma dp cameras had pocketable compact bodies with a large APS-C sensor (think Sony Cyber-shot RX100). But dp2's design makes it one for the bag rather than the pocket, although it is still much lighter than most DSLR cameras.

Placement of controls, however, is superb with two top command dials for quick switching of shutter speed and aperture in Manual mode. Mode and Power buttons are also on top of the camera.

On the rear is a clickable directional pad on the grip, and four buttons - Display, QS, AEL and Menu - beside the display.

The QS button is your best friend, as it offers quick access to a panel with the most commonly used options, such as ISO, white balance and image quality.

Press the QS button, use the directional pad to get to the desired option and turn the command dial on the top to change settings.

Overall, handling is great - provided you use both hands.

The dp2's speed of operation is average for a digital compact camera. Start-up takes 2sec; shutdown, 1.2sec. Shutter lag is around 0.5sec.

It takes about 2sec to process each photo you take. This delay may be due to the layered image sensor. Using an SD card with a writing speed rated at 25MB per second, it is able to shoot 7 RAW images in 1.5sec.

Autofocusing (AF) is almost instantaneous in bright sunlight. In dim conditions, it can take up to 2sec to secure a focus with the aid of the AF assist light. But at times, it just cannot find a sharp focus.

Image quality is superb with splendid colour reproduction and high levels of details. The amount of details it manages to capture from edge to edge in a frame is simply stunning.

There is very little chromatic aberration or purple fringing. Even when you shoot at f/2.8, you will see hardly any vignetting in the images.

But use ISO 100 and 200 for best results. At ISO 400, noise artefacts start to appear, with slight degradation of details.

At ISO 800, you will find higher level of noise artefacts and loss of details, but pictures will still be usable for the Web.

I would not recommend anything above ISO 1,600, as noise levels are very high with significant loss of details and colour, especially from ISO 3,200 onwards.

Despite its high price tag, this camera does not shoot video. The battery life is also below average compared with conventional compact cameras.

On a full charge, it lasted only 200 or so frames. But it does come with two batteries, so you can get double the mileage.

With its superb image quality at lower sensitivity levels and relative smaller size, the Sigma dp2 Quattro is best suited for landscape or portrait photographers who want something light and compact in their camera bags. trevtan@sph.com.sg

Shooting speed: Up to 4.2 frames per second