A team of Chinese scientists have developed a wearable bioelectric mask that can detect respiratory diseases in the air, including Covid-19 and influenza, and report results in 10 minutes.

Once connected to a wireless network, the mask can transmit real-time data to a user's mobile device, including detection alerts, according to a study published in the peer-reviewed journal Matter on Monday.

The mask is intended to be used as an early warning system to prevent future outbreaks of respiratory infectious diseases, researchers said.

These diseases are spread through the air by droplets or aerosols. But direct detection of viruses in the air can be difficult as the concentrations can be extremely low.

To test the mask, researchers placed the device in a sealed chamber and then sprayed gas containing very small amounts of viral proteins – Covid-19, H1N1 and H5N1 – into the space.

The data showed that the device could detect viral proteins in amounts as small as 0.3 microliters – up to 560 times less than the volume of liquid produced in one sneeze.

The researchers then connected the mask to a wireless network so that real-time results could be viewed on mobile devices like smartphones by using an app.

According to the researchers, the mask can detect trace levels of pathogens in the air within 10 minutes. 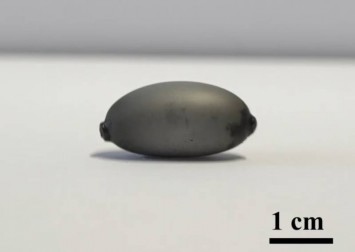 "These advantages of low detection limits, fast response and multichannel analysis enabled the bioelectronic mask to be a universal detection platform for various respiratory infectious diseases ," the authors concluded.

Fang Yin, the study's corresponding author and a materials scientist at Tongji University, said in a statement that the mask worked well in spaces with poor ventilation where the risk of infection was high.

"Previous research has shown face mask wearing can reduce the risk of spreading and contracting the disease. So, we wanted to create a mask that can detect the presence of a virus in the air and alert the wearer," Fang said.

If a new respiratory virus emerges in the future, the device could be updated to detect the new pathogens, he added.

In the future, the team hopes to reduce the detection time and increase the sensitivity of the device.

Previously, researchers from Harvard University and the Massachusetts Institute of Technology developed a wearable biosensor that could be fitted on a mask to detect the presence of nucleic acids associated with coronavirus in a user's breath.

The biosensor can provide results within 90 minutes, according to a study published in Nature Biotechnology in June, 2021.