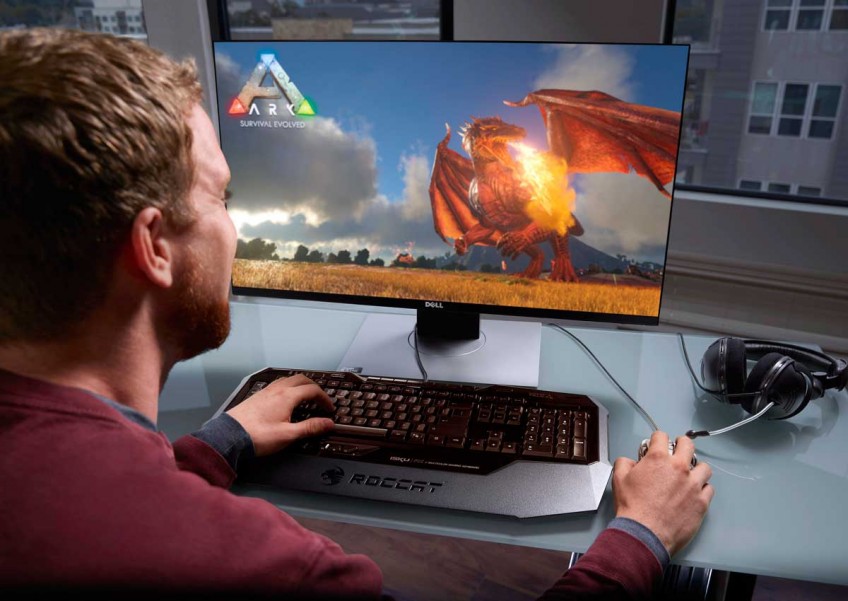 Overall, the Dell matches its rivals in terms of features and performance.

The Dell 27 Gaming Monitor (S2716DG) has all the features expected of a gaming-oriented display, such as a high 144Hz refresh rate and a low 1ms response time.

More importantly, it supports Nvidia's proprietary G-Sync technology - which works only with Nvidia graphics cards - that helps to reduce screen tearing and stuttering while running a game.

You might be surprised to learn that the S2716DG is Dell's first gaming monitor.

Dell is the world's top PC monitor vendor, but it is playing catch-up in this niche segment. Taiwanese brands Acer, Asus and BenQ are the leaders here, having launched gaming monitors over a year ago.

The S2716DG uses a twisted nematic (TN) screen that has inferior viewing angles compared to an in-plane switching (IPS) display.

Hence, there is a fair amount of colour shift when viewing the Dell from the sides.

The screen also looks slightly washed out, especially out of the box. But this issue can be fixed with a calibration tool and software.

During my testing, I found the Dell to have a good colour gamut (98 per cent of the Adobe sRGB colour space). Colour accuracy is good for a TN panel.

But IPS screens provide better colours. There are also IPS-type gaming displays that support Nvidia G-Sync while having comparable refresh rates and response times, albeit at a higher cost than the Dell.

But the Dell looks more handsome than some of its competitors. It has a narrow bezel of around 1mm around the top and the sides.

The bottom bezel, which is much thicker, is where you find the buttons to access the monitor's onscreen display (OSD).

These buttons are small but do the job. Still, when it comes to navigating the monitor settings using the OSD, I prefer a joystick like the ones I tried on Asus and Samsung monitors.

The Dell offers the ability to swivel, tilt and rotate from landscape to a portrait orientation. A hole in the monitor stand lets you funnel and tidy up the power and display cables.

Conveniently located on the left side are two USB 3.0 ports and a headphone jack. There are no built-in speakers.

Those without a Nvidia graphics card should probably steer clear of a G-Sync display like the Dell, though the monitor also has an ultra low motion blur (ULMB) mode that reduces motion blur. This is useful in fast-paced games.

Overall, the Dell matches its rivals in terms of features and performance.

Although it does not bring anything new to the gaming segment, Dell's reputation and warranty support will probably put the S2716DG ahead of its competitors.

Dell's first gaming monitor is asolid attempt that should satisfy gamers looking for a 27-inch display.

This article was first published on Jan 20, 2016.
Get a copy of The Straits Times or go to straitstimes.com for more stories.