With complaints increasing among local users as to the quality of the fifth-generation cellular network, the country's mobile carriers have admitted their services failed to meet consumer expectations, pledging improved operations.

SK Telecom, KT and LG Uplus have each publicly acknowledged their 5G networks had issues in delivery as some subscribers have been complaining their services are not as speedy and secure as advertised.

Faced with criticism ranging from low speeds to poor connectivity since the launch of 5G network services earlier this month, the mobile carriers' chiefs have pledged to improve their services with wider coverage and faster speeds.

"We have to be humble in accepting the consumers' complaints about our shortcomings during the initial stage," LG Uplus quoted its chairman Ha Hyeon-hoe as saying at a meeting on Friday. "It is time to focus our efforts to achieve the best quality of 5G network. 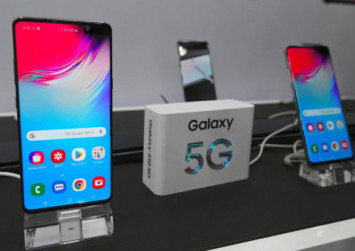 The first to pledge better service was SK Telecom, whose chief Park Jung-ho said in an emergency executive meeting on April 10 that while the company fell short of meeting consumer expectations, it will launch all-out efforts to improve 5G services.

A week later, KT followed suit as its chief Hwang Chang-gyu accepted criticism during a meeting with lawmakers. Stressing that the country's 5G network services were at an early stage, Hwang pledged to improve the quality as soon as possible.

"We are well aware of the consumers' criticisms," Hwang said, responding to the lawmakers' accusation that mobile carriers failed to deliver quality service by sticking to the title of the "world's first" county to offer 5G commercial service. "We are in emergency mode to solve the problem."

Consumers here have complained of difficulties in accessing the 5G network even in Seoul and the surrounding metropolitan area. Some 5G smartphone users have reported malfunctions in the transition between 5G and 4G, or Long Term Evolution.

The country's smartphone makers also suffered from glitches in the defective networks. While Samsung Electronics has released a series of software updates for the Galaxy S10 5G, LG Electronics has announced it will delay the launch of its first 5G-powered smartphone, the V50 ThinQ.

In order to address consumer complaints, the government said Saturday it would hold a weekly meeting with mobile carriers and phone manufacturers. The first meeting is to take place Tuesday to discuss how to resolve network glitches and achieve nationwide coverage.

"The government is taking seriously the consumers' complaints during the early stage of 5G commercial services. Along with mobile carriers and phone manufacturers, we will solve the problem," said Jang Suk-young, who coordinates the government-led trilateral meeting.

According to Rep. Byun Jae-il of the main opposition Liberty Korea Party, as of April 3 nearly 90 per cent of Korea's 5G base stations were located in Seoul, the surrounding area and five metropolitan cities.