From Syahrini's NFTs to Axie Infinity, Southeast Asia is waking up to the metaverse

When Indonesian singer and influencer Syahrini last month announced a metaverse tour sold as non-fungible tokens (NFTs), they were sold out hours after the launch.

Powered by cryptocurrency exchange firm Binance, the 17,800 NFTs came under three categories of increasing exclusivity. The most rare of the digital artworks contained Syahrini's signature phrase #CetarMembahana, which roughly translates to "so beautiful it's shocking", while those in the next tier bore the quote #MajuMundurCantik ("beautiful every step of the way").

The least exclusive of the three had the term #Huss-Huss-Sanah, which is merely a gibberish phrase in Bahasa Indonesia.

Binance said the singer, who has 38 million Instagram followers, was also interested in launching a "metaverse tour in Binance Smart Chain games, such as Glory Planet, Rara, [X World Games], and others", though it did not give a time frame on when this would happen.

Syahrini isn't the only celebrity in Indonesia jumping on board the NFT trend. Anang Hermansyah, her duet partner, also launched own tokens called ASIX that can be used as a utility in a blockchain-based, play-to-earn game that he's developing with local firm IDM Co-op.

Ridwan Kamil, the governor of West Java who is expected to run in the 2024 presidential election, earlier this month turned his personal painting into an NFT and sold it for 1 ethereum, or about US$3,120 (S$4,195).

President Joko Widodo has said Indonesia needs to "quickly catch on with the metaverse" so the country will not get left behind.

When he met Facebook co-founder Mark Zuckerberg in the United States in 2016, "he told me that in 10 to 15 years … everyone would be able to buy virtual land, build their own virtual businesses, and there will be virtual malls, gyms and tourism", Widodo said last month.

"Facebook has changed its name to Meta. Epic Games, Roblox, Microsoft are also developing metaverse plans. We need to prepare a strategy so that we won't get left behind other countries," the president said. 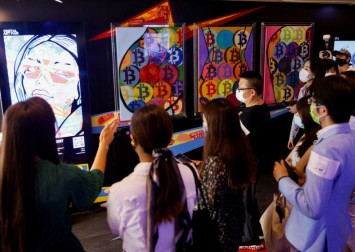 The celebrity-backed NFTs and the president's remarks underline how Southeast Asia's biggest economy is showing strong appetite for the tech world's fixation on the metaverse, which can be defined as a virtual world that is more immersive than today's largely two-dimensional internet.

Within the metaverse, people can buy and trade cryptocurrencies and NFTs. In play-to-earn games (P2Es), players can also be rewarded, in real life, for their in-game activities and own the in-game digital assets they purchase.

Facebook's parent Meta has been upbeat about the prospect of building their own metaverse in the region.

"Asia has always been ahead of the curve when it comes to digital adoption. Never has this been more evident than over the past two years," Dan Neary, vice-president of Meta Asia Pacific, recently wrote in an op-ed published on media and marketing publication Campaign Asia. "And I have no doubt that Asia will be at the front of the pack in embracing the opportunities."

An online survey by Australian independent information service Finder.com released in November found that 32 per cent of Filipino respondents owned NFTs, the highest out of 20 countries, followed by Thailand (27 per cent), Malaysia (24 per cent), the United Arab Emirates (23 per cent), and Vietnam (17 per cent).

Nicole Nguyen, the co-founder of Duelist King, a win-to-earn blockchain-based game, said having celebrities promote some elements of the metaverse was a good way to get everyday people on board, but more public education was needed about the broader use of their digital assets.

"I think last year, it was more about raising awareness. So people are just jumping right on board without actually demonstrating what kind of utilities the fans will be able to get out of the tokens," said the Ho Chi Minh City-based Nguyen, who is also chapter lead of Global Impact Fintech Forum (GIFT), a non-profit fintech forum.

"But I think this year, there will be some corrections. I'd love to see more smaller and micro-celebrities jumping in because they'd have a better drive to showcase or to increase the utilities of their tokens. And I think that will be the beauty of metaverse and Web3, where more people will be able to create their own kind of business without having to go through so many intermediaries."

No full-fledged metaverse has been created yet — although that may change within the next decade. In Southeast Asia, the metaverse is now largely taking shape in the form of P2E games, the most popular being Axie Infinity, created by Vietnamese unicorn start-up Sky Mavis.

The game boasts 2.4 million daily active users, half of them from the Philippines. It records at least US$33 million in daily transactions. Sky Mavis, backed by billionaire Marc Cuban and renowned Silicon Valley venture capital firm Andreessen Horowitz, is now reportedly valued at US$3 billion.

Others in the game-fi — or gaming and decentralised finance — field include Thailand's GuildFi, Vietnam's Ancient8, and Yield Guild Games Southeast Asia (YGG SEA) from the Philippines.

As a gaming guild, YGG SEA's business model is to buy into NFT assets of different blockchain-based games and lend them out to their guild members, or 'scholars', so they can start to play P2E games such as Axie Infinity. They currently have more than 4,000 scholars from Indonesia, Malaysia, and Thailand, and aim to pocket over 5,000 scholars before their next fundraising early this year.

2021 was the craziest year of our lives.

"Most jobs give you a fixed amount of money whether you produce little or a lot, but in our play-to-earn scholarships, players take 70 per cent of what they produce," says Gabby Dizon, co-founder of Yield Guild Games, the parent company of YGG SEA.

"This levels the playing field for people to earn a good supplemental income in developing regions, such as Southeast Asia, without leaving their region to be a migrant worker in a more developed country."

Evan Spytma, chief executive and co-founder at YGG SEA, said the company's main growth challenge was to find funding for the NFT purchases, which was required to boost their users' growth.

The firm last month announced it had bagged US$15 million in a fundraising exercise led by Crypto.com Capital, Animoca Brands, MindWorks Ventures, and others.

Observers generally agree that the development and utility of the metaverse and its elements are still at their early stages, so it will be hard for Southeast Asian authorities to regulate the space now. 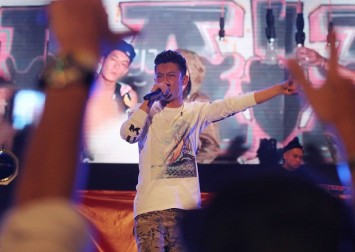 "But Indonesia must be prepared from now, such as by equally distributing and improving the internet connection to all islands and regions in the country," says Pratama Persadha, chairman at Jakarta-based Communication and Information System Security Research Centre. "The government is aware that there are tens of thousands villages that are still offline."

Jakarta should also support local blockchain-based start-ups, such as by providing financial incentives and slashing the import taxes for devices needed to traverse the metaverse, he said.

In terms of regulation, Pratama said the government must figure out ways to tax digital assets transactions and revamp its technology to boost law enforcement in the virtual world.

"For example, what happens if a user uploads someone else's personal data or the digital version of someone else's physical assets? This is unlawful, but authorities now lack the technological prowess to track and pursue the perpetrators," he said.

However, Nguyen from GIFT suggests there is a role for Southeast Asian authorities in the metaverse and Web3 development.

"Governments have the role of both legislator and adopter. If they can do both roles, they will be able to see how this technology is being applied and can deliver solutions for the government, in terms of bringing services to the people, for example," she said.