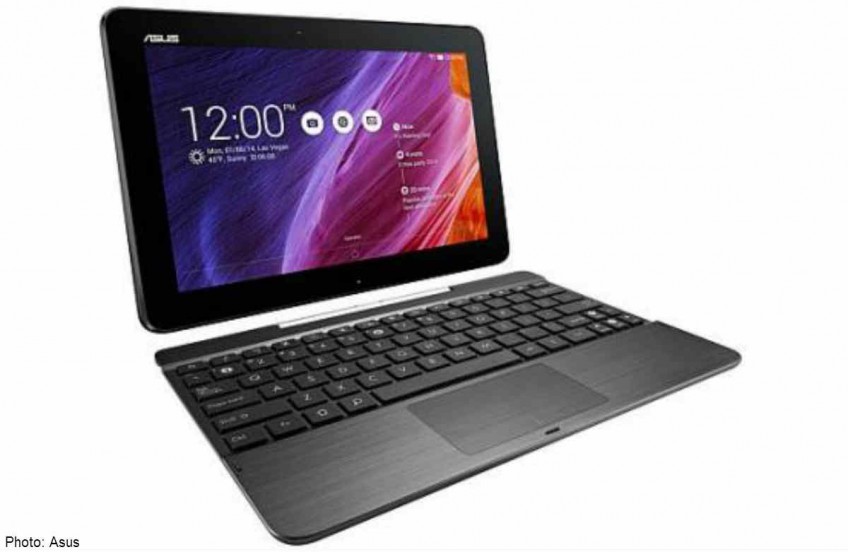 This is a safe and mundane tablet. Rounded corners, a black bezel and a dark soft-touch back do little to make it stand out from the competition, nor does the token 2-megapixel rear camera which you probably will not want to use.

That is not bad at all. In addition, the Transformer's in-plane switching (IPS) screen provides excellent viewing angles, even though its clarity suffers in brightly lit environments because of the display's glossy reflective surface.

On the bright side, the screen appears to have good colour accuracy. Using Splendid, a proprietary Asus app, you can tweak the display's colour temperature, hue and saturation. This level of customisation is common in PCs, but not in tablets.

It is a pity that the screen resolution is a mediocre 1,280 x 800 pixels. Even 8-inch models often have full high-definition screens now, making the one on the Asus look pixelated in comparison. However, a higher-resolution screen will likely bump up the price.

Asus' Transformer devices derive their name from their ability to switch from tablet to laptop. To turn the Transformer into an Android-powered netbook, simply attach the bundled keyboard dock.

Individual keys are small and cramped, but as a whole, the keyboard surprised me with its decent key travel. The small touchpad works well enough, especially when small, precise cursor movements are called for.

The dock's full-sized USB port lets you transfer files easily between the Asus and an external storage drive.

Unlike older Transformer devices, this keyboard dock lacks a built-in battery to extend the tablet's uptime when connected. So, the dock is lighter and the combined weight of slate and keyboard is only about 1kg.

Introduced in Asus ZenFone smartphones, Asus' new ZenUI interface makes an appearance on the Transformer. It looks modern and clean and includes features not found on vanilla Android KitKat, such as a customisable notification shade and a power management tool.

A quad-core Intel Atom processor (Bay Trail) powers the device. The interface felt responsive and the device did not crash during the test. However, the touch controls did not work in an action game called Blood And Glory, even though it seemed to have loaded properly.

Battery life, at 6hr 47min, is adequate but far from impressive. I was expecting 8hr as Asus said it was good for up to 91/2hr.

An attractive user interface and affordable price make up for its flaws. Battery life could be much better. vinchang@sph.com.sg