Tencent said on Thursday the system, to be introduced around Sept 15, would be linked to China's public security database and would be the first of its kind in the Chinese gaming industry.

It said the system will be able to accurately identify underaged players and impose the relevant play time restrictions it had previously announced.

"Through these measures, Tencent hopes to continue to better guide underaged players to game sensibly," the company said in a statement on its official WeChat account.

Honour of Kings, a fantasy multiplayer role-playing battle game, is the top-grossing mobile game in China. Tencent plans to gradually expand the requirement to its other games in future, it said. 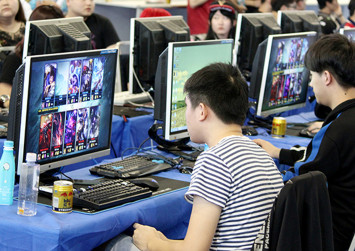 Shares of Tencent slid more than 3 per cent in afternoon trade to their lowest level in more than a year. That lagged a 1 per cent fall in the benchmark Hang Seng Index.

The news comes a week after China intensified a crackdown on online gaming, citing rising levels of myopia, heightening regulatory risks for companies in the world's biggest gaming market.

The impact of online games on the country's youth has attracted scrutiny from Chinese President Xi Jinping, who recently urged governments at all levels to implement effective schemes to prevent and treat the high incidence of myopia.