Tracking the bus to your workplace 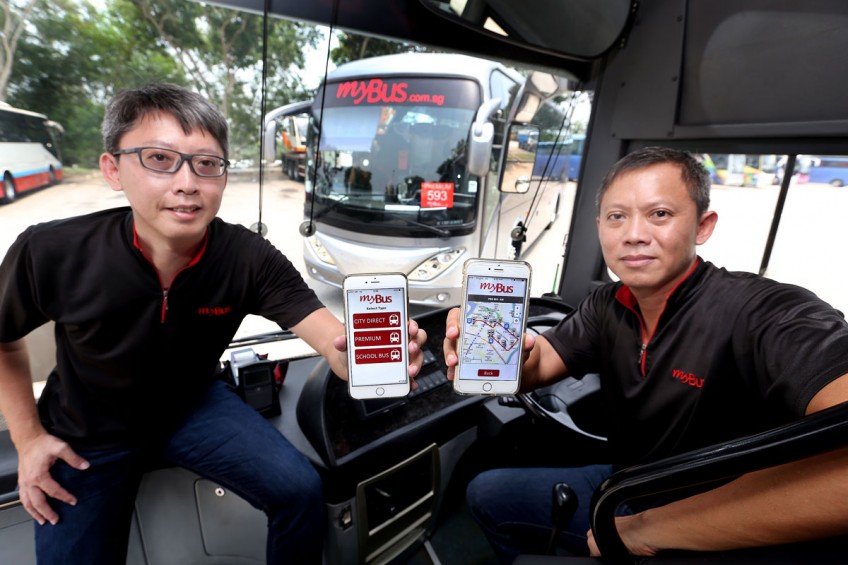 Users of ride-sharing app Uber have long been able to see where their driver is with GPS tracking.

This allows customers to know when their car will arrive and get updates on any unexpected delays.

Now, for the first time in Singapore, a private bus company is doing the same.

By selecting one of the bus routes, commuters can see a map of their surrounding area, as well as their own location, with the route and stops clearly marked out.

When a bus service is active, customers can see the position of all the buses on the route, and they can track the progress of the vehicles as the app refreshes every 30 seconds.

Mr Louis Loh, the director of the company, said: "It's very common that every day, people call the hotline and ask whether they have missed the bus, and when the next bus will be coming. We get about 10 calls every morning, and 10 in the evening."

He hopes that with this app, customers will have a more convenient way to track where the buses are.

The company runs school bus routes, as well as City Direct Services and Premium Bus Services to and from Changi Business Park.

Mr Loh estimates that the total daily ridership of the Premium Bus Services is about 3,000.

This is not the first time that his company is embracing technology. In 2011, Mr Loh engaged an external company to install a fleet management system by putting GPS trackers in every bus.

With that system, he was able to see where every bus in his fleet was, as well as to track their movements and even see whether the bus engines were on or off.

But at that point, the bus location information was only available to Mr Loh and the bus operators.

"We were thinking that we should let our passengers have the same privilege as us, to be able to see the live bus movements," he said.

So, Mr Loh paid $60,000 to the same software developer to create the live-tracking app, using information from the GPS trackers already installed in the buses.

"When some other companies come up with an app, their priority is a return on investment. But for us, this does not generate any revenue," he said.

However, Mr Loh insists that the outlay is worth it. "We feel that as a small company, we cannot compete with the big boys who have over 300 buses in their fleet," he said.

Although the app is still relatively new, some commuters are already using it to make their daily journey smoother.

Ms Cheery Lee, 51, takes Premium Bus Service 593 to her workplace in Upper Changi every day. "I like that I can see where the bus is, so I can sit at home and only go down to the bus stop when I need to," said the manager.

Finance executive Grace Tan, 35, takes the same service from her house in Punggol to her office at Changi Business Park.

"It's very convenient because sometimes the bus may be delayed due to things like a traffic jam. Previously, I would have had to check its Facebook page for updates or call the hotline to find out where the bus is, but now I can just check the app," she said.