US President Donald Trump has once again put Google in his crosshairs, saying on Tuesday that his administration would look into what he claimed were "seemingly treasonous" ties between the tech giant and China.

The statement, tweeted by Trump on Tuesday morning, came after Silicon Valley investor Peter Thiel said on Sunday that Alphabet's Google unit was working with the Chinese government instead of the US military and called for the FBI and CIA to investigate the company.

Thiel, who is a Trump campaign donor and also a Facebook board member, made his remarks in a speech at the National Conservatism Conference in Washington.

"Billionaire Tech Investor Peter Thiel believes Google should be investigated for treason. He accuses Google of working with the Chinese Government," Trump wrote on Twitter, adding, "The Trump Administration will take a look!"

In the tweet, Trump described Thiel, one of his top Silicon Valley supporters, as "a great and brilliant guy who knows this subject better than anyone".

In a response on Tuesday, Google said in an email: "As we have said before, we do not work with the Chinese military. We are working with the US government, including the Department of Defence, in many areas including cybersecurity, recruiting and health care."

In a separate interview on Fox on Monday, Thiel suggested that Chinese security services had likely infiltrated Google as it works on an artificial intelligence (AI) project in the country.

He did not provide any evidence to support his claims.

"If you say you're building a Manhattan Project for AI, don't you think that would attract the interest of foreign intelligence agents?" Thiel said on Fox's "Tucker Carlson Tonight" show, adding that he thought the Chinese were competent enough that the Ministry of State Security was likely to have infiltrated Google.

Last year, Google faced criticism over its plans to create a censored search engine for China under a project code-named Dragonfly. 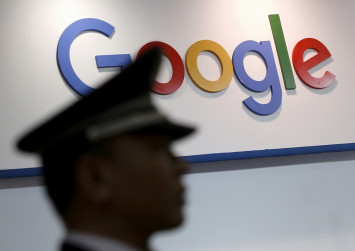 The investigative website The Intercept reported that the plan was put on hold by after protests by human rights activists and the tech giant's own employees.

Google's search engine retreated from mainland China in 2010 amid a major hack of the company and disputes over censorship of search results. But like other Western tech giants, Google has tried to maintain its Chinese foothold in case the market opens up.

It launched an AI centre in China at the end of 2017, the first facility of its kind in Asia, which it said was "focused on basic AI research". AI is a controversial dual-use technology that has reportedly been used in Chinese military drones that can conduct targeted strikes without a human making the decision to fire.

Trump's tweet caught the attention of Hu Xijin, chief editor of Global Times, a state-controlled Chinese tabloid. "The US has set so many political rules for businesses," Hu said. "This company is patriotic; that company commits treason."