A TV that doubles as wall art? Samsung seeks to redefine television 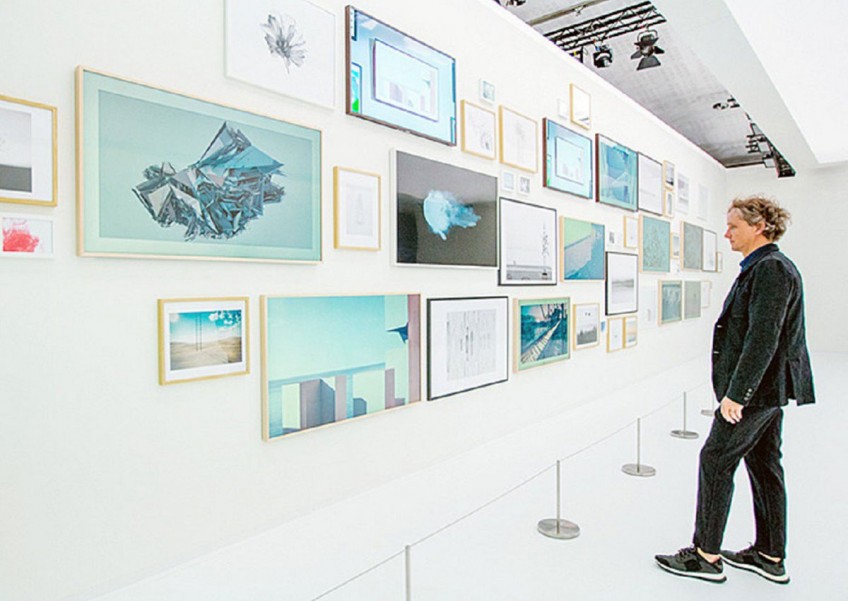 Work of art: Samsung showcases The Frame, a TV that doubles as wall art, during the launching of its QLED TV in Paris, France on March 14.
Samsung

There are many reasons why TV is not as popular as it was. One of them is this: A conventional television can be a nightmare for home designers.

For decades, TVs have had the same design, and with all the cables connecting your devices - from a DVD player to video game consoles - to it, the TV can be an eyesore in your living room.

The fact that people do not watch TVs as often as they did in the past only makes TV more irrelevant. How long do you watch TV per day? If you're not watching TV, then what's a TV for?

But Samsung Electronics is attempting to redefine television in the age of smartphones and tablets.

For years, the South Korean electronics giant has been producing TVs that serve the needs of two types of consumers: the people who truly care about picture quality and the technology behind it; and the people who just want the latest edition of a Samsung TV - regardless of its technology or even its design.

Samsung, therefore, is now eyeing a third kind of consumer: those who care more about how televisions are designed, so that they will not spoil the aesthetics of their living rooms.

On March 14 in Paris Samsung unveiled its latest line-up of premium TVs: QLED and The Frame.

Certainly, as an electronic company, Samsung used the chance to boast of its latest technology, but what attracted visitors during the launch ceremony, which was followed by an exhibition, seemed to be its attempt to redefine television in the age of smartphones and tablets.

QLED is a new category of TV by Samsung, according to Samsung Electronics Indonesia corporate marketing director Jo Semidang.

"We are again creating a new category of TV. We used to have a cathode ray tube [CRT] TV and we innovated with the LCD TV. And then we were the first to launch the LED TV. And now we've come up with QLED TV," he said.

First - the technology. The Q in QLED stands for Quantum dot technology, which Samsung claims is the ideal medium to view high dynamic range, or HDR, content. With HDR 1500-2000 brightness and 100 per cent colour volume expression, the QLED TVs are touted as being able to "reproduce almost any colour known to man, making HDR content more vibrant and natural-looking."

With the technology Samsung aims to maintain its base consumers - gamers and the traditional TV consumers who care about picture quality.

The race for best picture quality on TV has always been tough. Only recently, LG released its OLED (organic light-emitting diode) TV, which some media have dubbed as the "next big thing in home entertainment".

Jo claimed that QLED surpassed OLED technology, saying that the latter was only able to produce around 70 per cent of colour volume. In case you're wondering, colour volume is a way to measure the precision of colors by taking luminance - the objective brightness of an object - into account.

But Samsung does not want to stop at technology. It is not the only player in the industry and it has been facing tough competition from its rivals.

"We are trying to a give a new element in the TV. We understand that consumers buy TVs not just for watching. A TV is also part of lifestyle. We know that you cannot just move televisions and most of the time the living room is cluttered with cables because of the television," Jo said.

QLED TV - which is set to hit the Indonesian market in late April - is therefore equipped with a single near-invisible optical cord that is designed to allow users to connect all kinds of device through one connect box that can be hidden or put far away from the TV. This technology is key to Samsung's attempt to make TV more like home furniture as it solves the one big problem of having a television: the clutter of cables.

Thus, other than QLED, with its optical cable cord, this year Samsung have also released The Frame, a smart TV that doubles as wall art. The rationale behind The Frame is an acknowledgement that people do not watch TV as often as they used to.

Designed by Yves Behar, The Frame turns a television into an artistic frame for art that you can put on your wall, thanks to the optical cord and the no-gap-wall-mount technology.

"A home is an expression of personal taste, functional needs and interests. Every piece of furniture, every work of art on the wall, every object, becomes part of an aesthetic and style. The television is no exception," explained thefuseproject, the industrial design firm founded by Behar, on its website.

But that is not the only thing that makes The Frame look like a real painting. The Frame, which uses the 4K UHD (ultra-high dynamic) screen, can adjust its brightness depending on the surroundings so it can show you the image in its best light.

It also has a motion sensor that detects if a room is empty and turns itself off. It turns on again when you enter the room and displays the art pieces you have chosen, which are stored on the TV's library.

"So we are targeting both the people who like technology and those who like interior design. So the TV can be an integrated element of the interior, so people will love to watch the TV even when it is not in use," Jo said.