Thiel, an outspoken Silicon Valley supporter of former US president Donald Trump and a major investor in cryptocurrencies, shared his opinion in an online seminar centred on US Big Tech and China held by the Richard Nixon Foundation.

“From China’s point of view … they don’t like the US having this reserve currency, because it gives us a lot of leverage over Iranian oil supply chains and all sorts of things like that,” he said.

“I do wonder whether at this point bitcoin should also be thought in part of as a Chinese financial weapon against the US where it threatens fiat money, but it especially threatens the US dollar and China wants to do things to weaken it.”

“Even though I'm a pro-crypto, pro-Bitcoin maximalist person, I do wonder whether if at this point Bitcoin should also be thought of in part as a Chinese financial weapon against the U.S.” says @Paypal co-founder Peter Thiel.

“It is a collective effort and I hope more people see bitcoin as a global community, beyond individual nation-states,” Yang said.

Thiel also expressed concerns over what he sees as a security threat posed by TikTok, owned by Beijing-based start-up ByteDance. 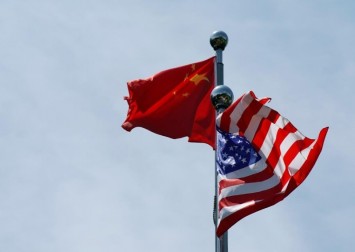 “The thing that is problematic about TikTok is that … it has this sort of incredible exfiltration of data about people. You are sort of creating this incredibly privacy-invading map of … a large part of the population of the Western world,” he said.

Thiel suggested that TikTok should be banned in the US, like it has been in India.

“It doesn’t seem like the sort of thing if you shut it down it would be, you know, this economic catastrophe.”

Thiel also criticised some US tech giants for pandering to China.

He said that while the US is still ahead of China in most areas, the latter “has been very good at copying [and] stealing things”, adding that in some cases “a lot of it was just handed over from the West”, citing Google as an example.

“Google was effectively working with the Chinese military, not with the American military,” Thiel said.

“One of the things that I was sort of told by some of the insiders at Google was they figured they might as well give the technology out the front door, because if they didn’t give it, it would get stolen anyway,” he said.

At this month’s meeting of the #NixonSeminar, @PayPal co-founder & Facebook board member Peter Thiel joined @MikePompeo and Amb. @Robertcobrien to discuss Big Tech and China, including about the issue of Tik Tok. More at https://t.co/s8tICXtEI0 pic.twitter.com/lQyxPa8hwK

“We do not work with the Chinese military. We are proud to continue our long history of work with the US government, including the Department of Defence, in many areas including cybersecurity, recruiting and healthcare.”

Thiel said that among the biggest names in Silicon Valley, Apple “is probably the one that’s structurally a real problem, because the whole iPhone supply chain gets made from China.”

The venture capitalist, who sits on Facebook’s board of directors, said that the social network company, as well as Amazon and Microsoft “aren’t naturally pro-China constituency”.

Apple and TikTok did not immediately respond to a request for comment on Thursday.

On Tuesday, Thiel was joined by former US national security adviser Robert O’Brien and former US secretary of state Michael Pompeo, who warned of possible intellectual theft by Chinese students studying in the US.

“I think it makes it riskier to have those students studying here because the capacity for that information to end up in places that benefits the Chinese Communist Party’s model [and] its ideology is pretty significant,” he said.

The comments came as American political and business leaders have been ramping up rhetoric against China’s growing technological ambition.

During this year’s “two sessions ”, China’s largest annual political gathering, Chinese Premier Li Keqiang vowed to boost support for research and development initiatives over the next five years and beyond. 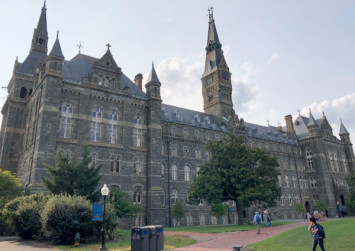 Meanwhile US President Joe Biden has described China as his country’s “most serious competitor” and has vowed to confront Beijing on various fronts, including human rights and intellectual property.

Earlier this year, a US group led by former Google CEO Eric Schmidt produced a report calling on Washington to manage “asymmetric competition” with China when it comes to technology.

The report said that a certain degree of “bifurcation” would be in US interests.

On Tuesday, Thiel echoed those sentiments, saying that “seeing China in an adversarial way would be a helpful start” for the US in handling its competition against China, although “Silicon Valley has not been that good on this”.

He also suggested that artificial intelligence (AI) is an area in which the US might want to exercise restraint because of its applications in surveillance.

“If crypto is kind of libertarian, AI is kind of communist,” he said.

“Even though we are ahead of basic science of AI, China is willing to apply it and turn the entire society into a face recognition surveillance state … That is something we are not willing to do.”