The patient, Ngo Van D., 43, from Thuong Thanh Ward, Long Bien District, Ha Noi, was diagnosed with spinal tuberculosis two years ago. He was unable to stand or walk normally.

“Using robots in spinal surgery allows surgical steps to be conducted in an extremely accurate way. With the system, doctors can programme all the anatomical positions of the spine onto the 3D screen of the computer, helping the doctors actively plan surgery in detail before performing surgery and monitor all steps of the procedure on the 3D screen of the computer,” said head of the hospital’s Orthopaedic Trauma Department Tran Trung Kien. 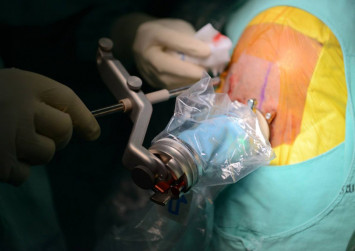 Kien said that the robotic system was equipped with a neural warning system that helps reduce the risk of damaging nerves such as the spinal cord and nerve roots. The successful operation will open more treatment opportunities for patients in Ha Noi and neighbouring areas.

“In particular, the use of robots in surgery helps minimise the rate of surgical accidents. Recovery will be faster because the surgery time is shortened. Without robots, operations can last about eight hours, compared to only three with robots," said Kien.

Duc Giang General Hospital performs about 10,000 surgeries every year, of which nearly 2,000 are performed by the hospital’s Department of Orthopaedic Surgery.