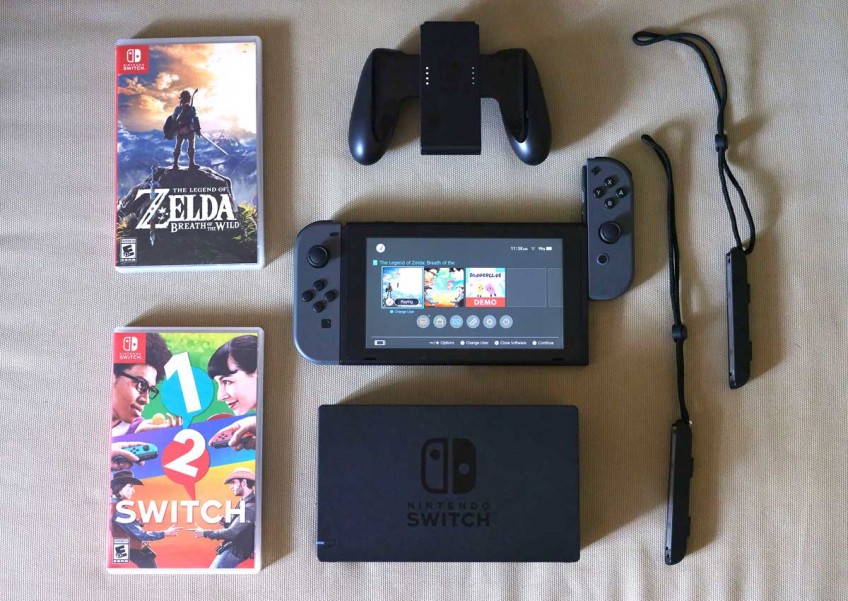 The Nintendo Switch package comprises a main console with a 6.2-inch touchscreen display, a dock with USB and HDMI ports and a pair of controllers with accessories. In Singapore, it is sold as a bundle at $699 with two games – The Legend Of Zelda: Breath Of The Wild and 1-2 Switch.
The Straits Times

Amid all the brouhaha over its perceived higher pricing in Singapore, the new Nintendo Switch gaming console was finally launched here on March 3. I managed to buy one unit on launch day to review. And this is what I think about it if you should, well, make the switch.

The Nintendo Switch is a two-in- one gaming console. The package consists of a main console with a 6.2-inch touchscreen display, a dock with USB and HDMI ports, a pair of controllers called Joy-Cons, a Joy-Con grip and a pair of Joy-Con wrist straps.

You can choose the model with two grey Joy-Con controllers (the version reviewed), or the version with one controller in blue and the other in red.

The Joy-Con controllers can be attached to both sides of the main console, so you can game on the go. When you reach home, you mount the console on the dock connected to a television set via an HDMI connection and continue gaming on the large screen of your TV.

It is pretty smart of Nintendo not to release yet another gaming console with faster processing speed or better graphics capabilities. Instead, the Switch is one console you need for gaming on the go and at home.

In Singapore, the Nintendo Switch is sold officially as a bundle at $699 with two games - The Legend Of Zelda: Breath Of The Wild, and 1-2 Switch. It includes three amiibo (Nintendo's NFC-enabled figurines).

If you take away the two bundled games that collectively cost around $160 (the amiibo cost next to nothing), the price of the Switch itself comes to around $539. So even if you factor in shipping and taxes, it is still a tad expensive here.

There is a limited number of games available in Singapore for now. Besides the two bundled ones, only three others are available here - Just Dance 2017, I Am Setsuna and Skylander Imaginator.

You could buy more games using the Nintendo eShop app of the console. But you have to change the country of residence from Singapore to the United States or Japan inside the settings menu.

For now, The Legend Of Zelda: Breath Of The Wild (see review below) is the only game worth playing on the Switch.

The Switch's main console is pretty lightweight and thin. Even when the Joy-Con controllers are attached, it weighs a mere 404g.

The speakers on its top deliver surprisingly clear sound, and there is a nice feel about the main console and the controllers when you hold them. It is not a smudge or fingerprint magnet either.

On the top, you will find the power and volume buttons, a slot for games and a 3.5mm headphone jack. At its bottom, you will find a USB-C port for charging.

There is a rear kickstand that is quite thin and flimsy. It does not look like it will support the weight of the console over long periods of use.

The kickstand props the console at an angle of 70 degrees. Not very conducive for viewing movies. But you can't watch anything for now, as there is no Netflix or Amazon app for the Switch yet.

Overall, I find the Switch excellent for gaming on the go. But I have a few quibbles. For one thing, while the display has vivid colours and crisp details, it is quite reflective.

And to make the Switch compact and portable, there are some trade-offs when it comes to the Joy-Con controllers. All the buttons and the triggers on the controllers are a tad small.

I found myself always pressing the wrong buttons, as well as tapping the triggers wrongly during my first few days playing it. It took me a while to make sure I pressed the B instead of the A button.

The battery life of the main console is around 3hr to 6hr, according to Nintendo.

During my tests, I found that I could get around 3hr of battery life playing Zelda.

The transition from a portable gaming console to a TV gaming one is really seamless. Once you put the main console into the dock, you can immediately pick up where you left off - with almost no lag.

Indeed, the only lag is when you detach the Joy-Con controllers from the main console and attach it to the Joy-Con grip in order to play.

I found the Joy-Con grip to be a bit narrow and uncomfortable for long periods of gaming. I would recommend getting the Nintendo Switch Pro Controller ($109) for a more comfortable grip for those gaming marathons.

The Joy-Con controllers' built-in accelerometers are pretty accurate in games such as 1-2 Switch (see B13 for review). They provide nice haptic feedback too.

The right Joy-Con also has an infra-red sensor at its bottom (read review of 1-2 Switch for its use), while its thumb stick doubles as an NFC reader for scanning the amiibo. Trust me, you will scan a lot of amiibo when playing Zelda.

Unlike what has been reported by several online publications and in the social media, I have yet to experience any dropped connections with the console using the Joy-Con controllers.

But I do find that, on the big screen, the graphics are not as crisp as when you viewthem on the console's display.

There are some stutters at times when playing Zelda. But I am not sure if it is the console's or the game's fault.

There were countless times when I was on long-haul flights thinking I could use the time to catch up on the games on my console. With the Switch, I can finally do that.

Saved games are not stored in the cloud but locally. And you do not need an Internet connection to log in and play. This is fantastic when you are on a plane.

I am looking forward to playing sports games, such as Fifa or NBA 2K (to be released later), on the go.

Verdict: Apart from some minor quibbles and the current dearth of games, the Nintendo Switch is a game-changing gaming console with its seamless switch between playing on the go and at home.