We don't want creeps to use this phone's 50x zoom feature

PSA: Please stop people from making advanced technology that is creepy. It's starting to look like a Black Mirror episode over here.

Just kidding. Though you can't help but think that when you have a smartphone with up to 50x zoom.

Yes, in case you missed it, the Huawei P30 Pro is trending online because of its super-zooming capabilities. The Verge said it's the best on any smartphone camera to date.

That's a bold statement, but they're not exaggerating. The outlet showed photos taken with up to 24x zoom, and the detail is crisp even when you're taking a photo from a distance. We're not going to lie, it's a great feature-imagine all the clear concert photos you can take while you're sitting at the upper box section.

But it gets wilder from there when netizens started posting videos taken from the P30 Pro to show the 50x SuperZoom in action. Here's one from Beebom where the host is showing the photos he took of the Eiffel Tower.

Another viral video going around is someone from China, who appears to be on a building's rooftop, zooming in on a checkerboard from below him. It's not indicated how far he was exactly, but seeing the zoom in action gives you an idea,

The second video was met with a lot of skepticism, with many claiming that it might've been taken from a DSLR camera and not the P30 Pro, it doesn't seem impossible either. Take note that Huawei showed a SuperZoom demonstration when they unveiled their new model. It checks out.

As awesome as it is to have a phone this advanced, we have some concerns. I mean, it can be used to invade someone's privacy. Mashable noted that you can take a clear photo from 38,000 km away-that's alarming. Even blogger Camie Juan brought up on Twitter about the possible "pervs spying on people's private lives."

If you don't believe this can be used with bad intentions, you need to watch either Black Mirror or YOU. The latter is about a man named Joe Goldberg who stalks the woman he's "in love with" through her bedroom window and her social media-which is also why we're extra careful in keeping our accounts secure. We won't be surprised if he's using a P30 Pro on season 2.

Likewise, in the Black Mirror episode "Shut Up and Dance," we see people being blackmailed by an unknown person. This blackmailer basically got dirt on them by spying through a laptop webcam, and probably a phone with SuperZoom. If that won't make you paranoid, we don't know what will.

Fergus Hanson, head of international cyber policy at the Australian Strategic Policy Institute (ASPI), told ABC News Australia, "Even if you might not have a line of sight of another human being, your every action may be scrutinized in enormous detail… I guess it's like this sort of creepy guy at the beach with a [telephoto] lens camera, and bringing that to your everyday life, and having that person potentially around everywhere." 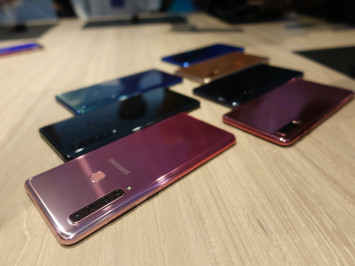 Of course, the Huawei P30 Pro is far from being a professional spy camera or, as Digg called it, a telescope. But at this point in time, anything's possible with technological advancements. Scientists already found a way to take a photo of a black hole, who's to say phones can't be used to spy on people from distant locations?