"I just happen to be drawn to these male-oriented things. I can't explain why, but I'm just attracted to them," said Ms Tay.

The 28-year-old started out writing her own column about cars in the university newsletter while still studying at the Nanyang Technological University (NTU) for a degree in business marketing.

In her second year at NTU, she interned with Cycle & Carriage (Mitsubishi) as well as Volkswagen, because of her passion for cars. Along the way, she got to know members of the automotive press.

Forging these relationships paid off - in 2007, she was offered a chance to write a column in Wheels Asia, a local motoring magazine. As a writer, she quickly felt there was something missing in her stories - within a year, she acquired a simple entry-level Nikon digital SLR camera.

Ms Tay taught herself photography skills and began taking her own pictures. That marked the start of her journey as a photojournalist.

Journalism and photography, she said, were accidental discoveries.

"I used to dislike writing essays, and I even failed General Paper in junior college," she recalled.

All that has changed - she now takes pride in using pen and lens to produce stories on her blog, www.cheryltay.sg, which she started in 2008.

She was first drawn to cars, motorsports and photography. This, later, led to a specific interest in sports photography.

Starting out simply as a fan of the the mixed martial arts (MMA), she began to immerse herself into the world of this sport.

Last year, she became resident photographer for One FC, Asia's largest MMA organisation. She had heard of the opportunity through a friend and decided to take a shot at it and snagged the job.

Pain, disappointment, pride, joy - these are emotions that often run high in the ring during an MMA fight, and the sport's unpredictable, visceral nature can be hard to take.

It is not uncommon to see moves drawn from disciplines as diverse as Brazilian Jiu Jitsu, Muay Thai, or even conventional boxing.

Things happen in the blink of an eye, but Ms Tay remains unfazed - she is no stranger to unpredictability in her work.

"Motorsports photography also has the element of unpredictability, but with MMA, you're up close and you see the raw emotion on the competitors' faces, unlike in motorsports, where they are hidden within the cars, faces obscured by their helmets," she said.

"It takes less than a second for a fighter to score a knockout - if you miss that, it's game over. It's all about timing, precision, and your picture has to tell a story. You can't just take a picture of any punch!" she added.

The challenge does not scare her, though - in fact, it drives her to work even harder.

"I need to rise above the other photographers who could take the exact same shot," she quipped.

Being the championship's official photographer has its perks. She has a special spot above the cage reserved for her. It provides an excellent view of everything that happens in the ring.

Travelling around the region, she spends long hours covering fights and the happenings that surround them. Typically, a week of open workouts, seminars, workshops and press conferences leads up to a fight.

She lugs plenty of weight about when she works - in addition to her main camera, she carries a backup, a Canon EOS 5D Mark III, as well as a range of lenses, including 35mm, 45mm and 15mm.

Before each fight, she explores the fighters' backgrounds, reading up on their personal histories and watching videos of their past fights.

Preparing this way, she said, allows her to anticipate shots better as she becomes more familiar with each fighters' mannerisms.

Then, during the fight, she looks out for trademark moves being thrown, or little quirks, habits or expressions each fighter might display.

On the day of the fight itself, she arrives at the venue in the afternoon and spends all evening around the ring snapping pictures - she spends up to six hours on her feet covering the event.

It is hard work, but it is worthwhile, she said. "It's when you get that perfect shot - that's when you feel like it's totally worth it, no matter how many hours you've been on your feet," she said.

"I must get that shot, even if no one else can." 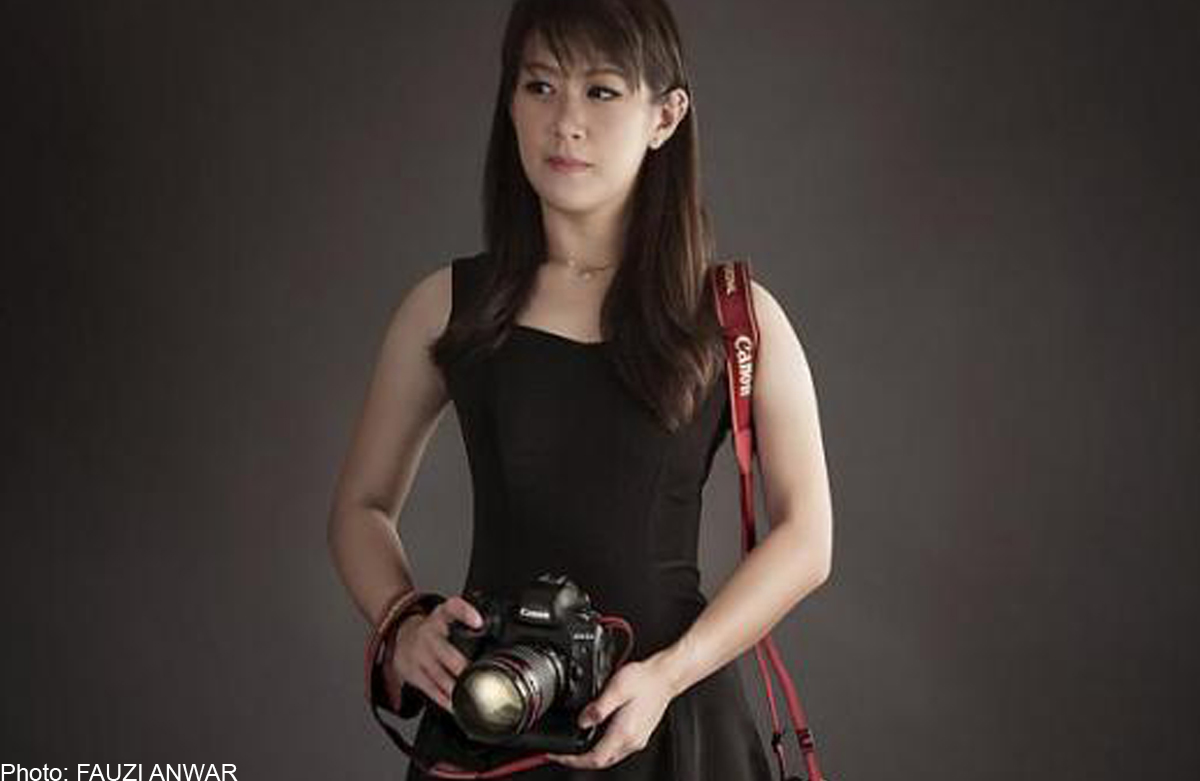 Who:Ms Tay, 28, is One FC's official photographer, as well as a motoring journalist - one of the few women in the field.She is the eldest daughter in a family of four, and is the only person in her family with an interest in photography.She writes about cars, lifestyle, technology and fitness on her blog and also contributes to Yahoo, Wheels Asia, FHM and Men's Health. 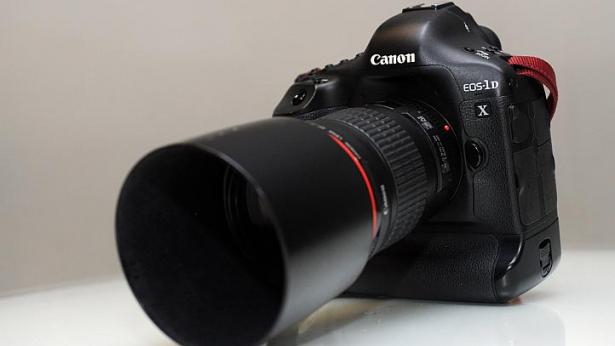 Her camera: I chose the EOS-1D X because it is very good for action photography. As much as I can predict and anticipate shots, I need the camera to deliver - it has a 12-14 frame per second burst- shot function, which helps me get the shots I want 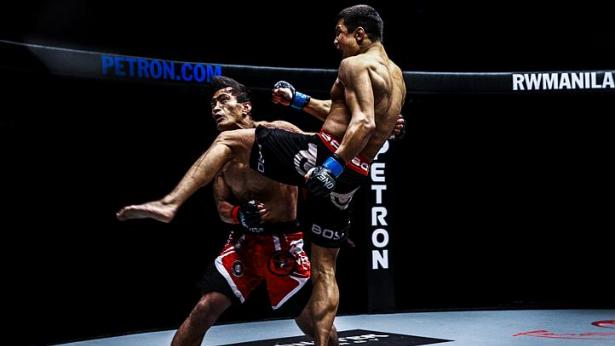 Timofey Nastyukhin landing a flying knee knockout on Eduard Folayang.This is a really dramatic shot - you can see Folayang trying to land a punch on his opponent, but he suddenly takes a knee to his face. 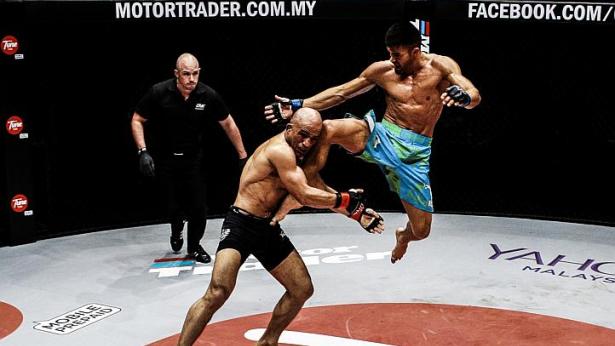 Àriel Sexton landing a flying knee on Kamal Shalorus.This is my first flying knee shot so it is a little special to me. It was taken at One FC: War of Nations in March last year. 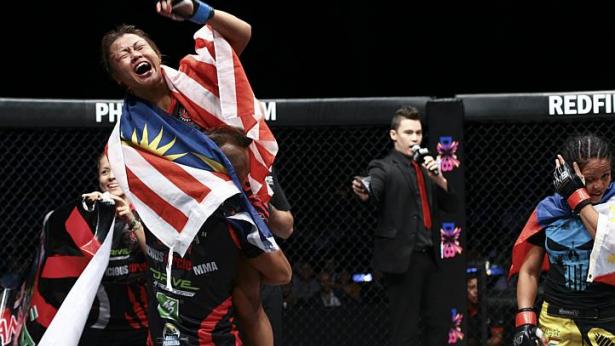 Ann Osman celebrating her victory.It was her first win in One FC, and this was not an easy fight as she was up against the two-time female world boxing champion Ana Julaton at One FC: Reign of Champions in Dubai.

This article was first published on Mar 14, 2015.
Get a copy of Digital Life, The Straits Times or go to straitstimes.com for more stories.