The Boy de Chanel make-up range, launched on September 1 in Korea last year ahead of a global release this month, offers male customers a small range of beautifying products.

The products include foundation, concealer, row pencils and a lip balm, all with mattifying properties.

The famous Parisian fashion house is far from the first to launch make-up for men.

Others rolled out one-off ancillary offerings, like Yves Saint Laurent's L'Homme, which produced a masculine version of its "Touche Eclat" concealer. But before the decade was out, most were discontinued.

What has kept men from applying, or at least admitting to wearing, make-up products is an image consciousness inherited from Victorian opinions on the vanity of painted faces and rugged masculine ideals.

It's not that history is empty of men who have availed themselves to coloured beauty products. Status-defining khol eyeliner in ancient Egypt, and aristocratic powdered faces in Elizabethan England and pre-Revolutionary France, are but a few examples of the looks employed by history's rich and powerful.

Public figures are also regularly derided for being particular about their physical shortcomings. Not long ago, French president Emmanuel Macron was lambasted for racking up a US$30,000 make-up artist bill during his first quarter in office.

So what has changed for Chanel to take such a bold step?

Today's beauty standards are part of the reason. With impossibly glowing, ageless, chiselled male stars found across practically all forms of media, questioning one's own looks is becoming far easier.

Added to that is the constant documentation and dissemination of our lives on social media where looking one's best is key and skin-enhancing products can seem like the perfect solution.

"[They're] like an Instagram filter in real life that can help you be confident when presenting yourself to other people," says Toni Tran, a London-based architecture graduate known online as the blogger and photographer Fashitect.

Tran explains that social media influencers are by nature more open to experimentation and to being "always camera ready".

"I think the subject of make-up for men is discreet, but it's common. Unless you're in the beauty industry, make-up isn't a subject men talk about or are taught how to apply."

Another reason is that the products are becoming less feminine in their effect.

"When I was younger, I dabbled in make-up to try and mask things that I didn't feel confident enough to embrace," says fashion designer Julien Fournie, now in his early forties. "But the products then were too heavily textured, in a way too feminine in their aspiration."

But the real reason is a deeper shift.

"It has a lot to do with Generation Z, which is the first to reject gender and sexuality norms," says US-based Korean-American editor David Yi, founder of men's beauty website Very Good Light.

"Even 10 years ago, men weren't as interested in grooming or beauty and weren't as free to express themselves as they are today, without social repercussions - that is, feeling that their masculinity is being questioned for partaking in so."

Now mainstream brands like CoverGirl and Maybelline have opened their campaigns and ambassadors to be more inclusive, and an increasing number of influential beauty gurus are male.

While the market for male make-up suffers from having relatively few dedicated brands - with only niche lines like British speciality brand MMUK, now distributed through e-tailer ASOS, or discreet brands like Tom Ford's For Men making much of an impact - serious male customers are not hesitating to step up to the make-up counters of other brands offering effective products. 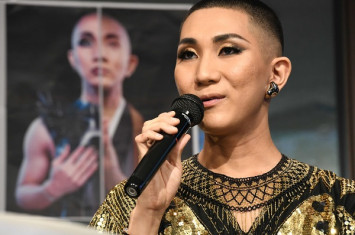 Besides, are concealer, foundation or eyebrow pencils even really make-up? Not in South Korea, the first country to receive the Boy de Chanel range, wrote Yi in his review of the line.

"Chok-chok" - that type of dewy skin radiance - has not yet caught on to the same level outside Korea, even in image-driven industries like fashion, but Yi says it's only a matter of time as cultural influences no longer flow from the West outwards. Younger generations are keen to embrace the best, wherever it may emerge.

"The rise of make-up consumption in South Korea is only telling of how the world will begin to add cosmetics in their own regimen," Yi says. "With K-pop, namely [boy band] BTS, becoming household names in the Western world, their aesthetic is absolutely catching on."

It follows that "what men want is the same thing as women really: clear, beautiful skin," says Fournie, who is partial to Givenchy's Mister Mat and Mister Smooth products, which are sold by Sephora and advertised by female models. "In short, it's about looking your best, as naturally as possible for as long as possible."

After all, make-up isn't gendered, only our perception of it is, Yi says. "[I] do feel that many men need permission to partake in beauty, which is why Chanel's foray is so important."

As border-free culture, inclusivity and gender norms broaden, so does the profile of men reaching for make-up. Pierre Romeas, a 30-year-old business consultant, doesn't hesitate to grab a concealer when his busy schedule catches up with his complexion, and often has product on hand even on the go.

"Being presentable and efficient isn't just a matter of clothes, but also of looking clean and dynamic," says Hamburg-based Romeas, who trades advice and tips with male and female friends on the latest and greatest products. "There's no way I would turn up to a client-facing meeting with a shiny, sweaty face or with dark circles that betray how tired I feel."

"Make-up is becoming less of a scary word," Yi says. "Rather, [it is becoming] one that is inclusive of all people, men included."