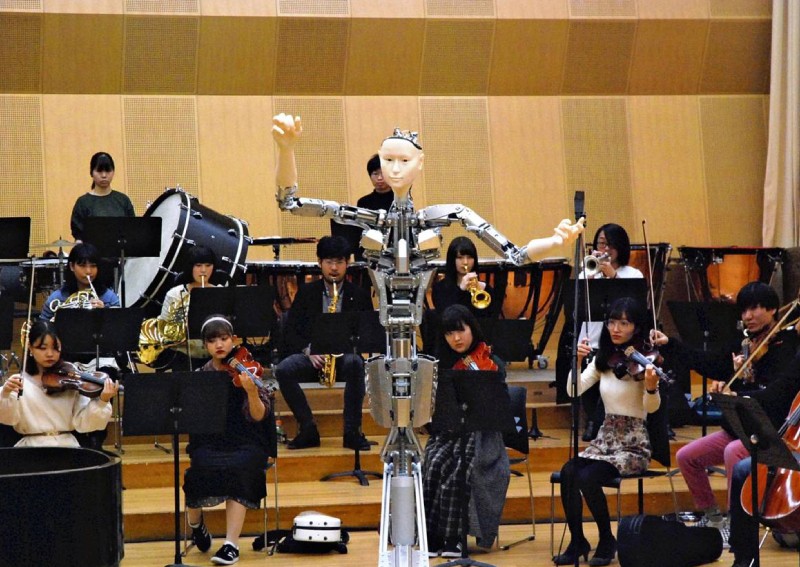 In Japan, a robot conductor has been paired with a student orchestra in a study of the communication that takes place between a conductor and the performers.
The Japan News/Asia News Network

The Kunitachi College of Music in Tachikawa, Tokyo, and the University of Tokyo have launched a unique research project to determine whether a humanoid robot can conduct an orchestra and elicit a performance with artistic expression.

The robot conductor has been paired with a student orchestra in a study of the communication that takes place between a conductor and the performers, and the significance of the conductor's role.

Researchers from both universities held a press conference at the college on Jan 11.

Alter 3, the robot being used in the study, was developed in January 2019 by the University of Tokyo and Osaka University. With cameras for eyes and software that enables it to move autonomously, the robot can move in response to the movements of others.

The primary goal of the study is to determine whether robots can execute autonomous commands and gestures to create emotional performances for humans. The study is expected to last until March 2022.

The college will introduce a special course on conducting by Alter 3 in April and has been carrying out experiments to increase the robot's repertoire of songs it can conduct and other areas. The study is tracking its growth process.

"Unlike ordinary robots, [Alter 3's] movements change by interacting with humans. The performers were initially sceptical but have gradually been getting used to it, " Prof Takashi Ikegami of the University of Tokyo Graduate School of Arts and Sciences, who was involved in the development of Alter 3, said at the press conference.

"The role of the performer is to understand the intentions of the conductor. The existence of conductors and the future of music could change as a result, " said Yasuaki Itakura, who is a guest professor at the college.

Alter 3 conducted an orchestra of 34 students at the college on Jan 11, moving its hands while swaying dramatically from side to side.

According to a third-year student who is the orchestra's concertmaster and had practised with the robot for three days, "Human conductors raise the tempo when they get excited or worked up, but Alter's tempo is precise and stays the same."