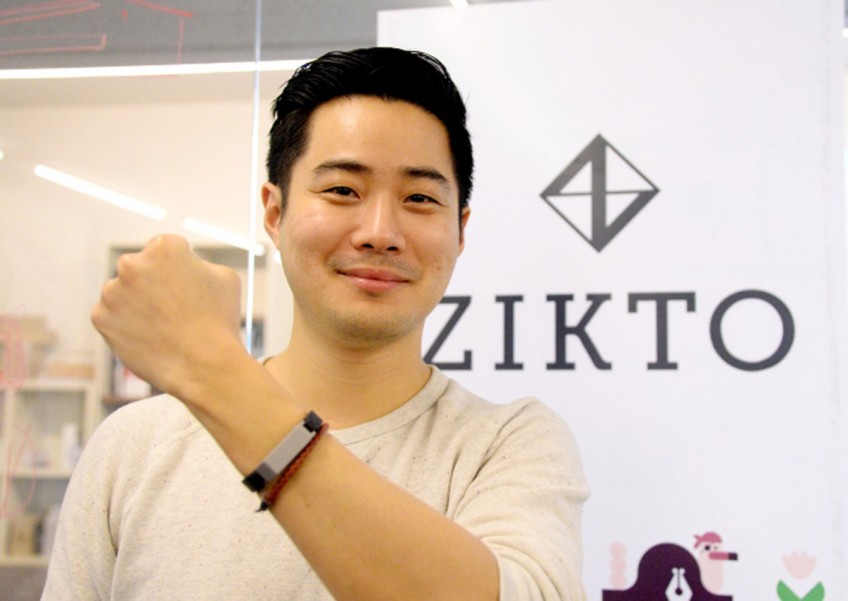 In 2014, South Korean startup Zikto created a buzz in the still-nascent wearable device market by crowdfunding US$165,000 (S$231,360) on Kickstarter to build a unique, posture-tracking fitness band that provides feedback on a user's walking posture by analysing the speed and angle of their swinging arms.

Three years have passed and now the Seoul-based startup is looking to take the next step by building a platform that links fitness wearables to health care service providers such as insurance companies, hospitals and health centres interested in monitoring people's fitness activities.

"We used to call ourselves a hardware startup that make wearables for fixing bad posture. But now, we want to broaden our business to become a firm that connects wearable technologies with health care service providers," Zikto CEO Ted Kim said in an interview with The Korea Herald.

In embracing this new direction, the Seoul-based startup aims to answer a key question that all wearable makers constantly face -- "Why should people purchase wearables, which provide what seems to be very basic information about their physical activities?" Kim said.

When wearables were new and few in numbers, people were curious about the devices themselves.

With more devices with similar features becoming available, their functions now play a limited role in convincing consumers to purchase and regularly use wearables, the 33-year-old Zikto CEO said.

A wearable's biggest selling point is its secondary value -- how well the fitness records logged by a device translate to tangible benefits, be it cash rewards or health care service perks.

Zikto has already adopted the idea to its own service model, joining the likes of forerunners such as Fitbit and other fitness trackers that have joined hands with insurance companies and retailers to compensate users for their physical activities.

As of now, the Seoul-based firm runs a walking mileage system that awards 500 won (45 cents) for every 8,000 steps walked and discounts on a local membership service that provides access to fitness centres around town.

In the coming months, Zikto plans to launch a new platform service called "The Balance Platform," which will shape the company's future business direction. The platform will collect and manage data generated by various wearables, including Zikto's, and provide this information to health care institutions as well as regular companies who want to access such data.

"We expect such demand to continually grow. For example, a hospital may want to monitor the physical activities of a particular patient who is prone to obesity, while a corporation may want to reward employees who exercise more as part of its in-house wellness programme," Kim said.

"Doing so would require everything from designing and building a wearable to programming and operating an application to monitor and manage user data on a server. And this technology gap is what Zikto would like to fill," said the CEO.

Zikto's foray into the platform service business does not mean it will no longer focus on improving and marketing its main posture-tracking fitness band, the Zikto Walk, Kim pointed out.

The company is planning to introduce an upgraded version of the Zikto Walk equipped with new, improved features to meet user demands and reflect fast-changing design trends.

While Zikto has focused mainly on the Korean market until now, it plans to expand its global footprint by bringing its new wearable platform model to major Asian markets such as China, Hong Kong and Singapore in partnership with Green Cross, the CEO said.

"We plan to first sufficiently test out our new platform service in Korea and later look for more global health care partners in Asia that we can work with," Kim said.

Zikto was co-founded in 2014 by Kim, a former engineer at LG Electronics' research institute and two partners from Shinhan Investment Corp. and SK Telecom. The startup led a successful crowdfunding campaign in the US to build its posture-tracking fitness band Arki, which has been renamed as the Zikto Walk.