Dining 50m in the air: Don't drop your knife! 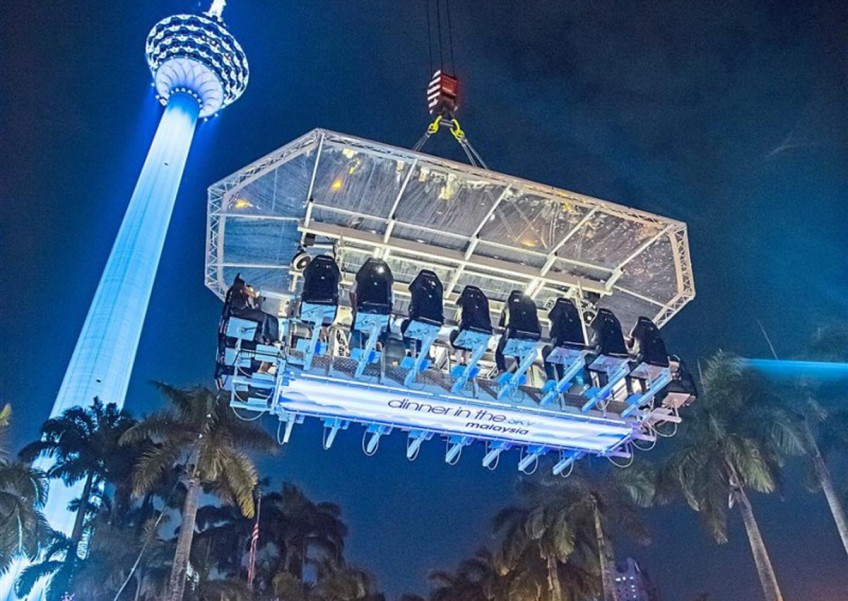 8.30PM, Saturday. The rain has slowed to a drizzle and the city of KL is awashed in bright lights and promise. Unfortunately, any optimism you harboured as you bounded up to the entrance that evening is obliterated the moment the hostess hands you the indemnity form.

"Sign this please," she announces, rouged lips stretched out in a bright smile.

This isn't exactly the sort of welcome one expects when dining out. But then again, you're not in any run-of-the-mill restaurant.

This is Dinner in the Sky, whereby diners are seated, 22 at a time, and lifted by crane for a night of fine food and vertigo. Pioneered by Belgian-based duo, publicist David Ghysels and crane specialist Stefan Kerkhofs, in 2007, Dinner in the Sky is listed by Forbes Magazine as the world's Top 10 Most Unusual Restaurants.

Since then, thousands and thousands of intrepid - and not to mention, loaded - gastronomes in more than 40 countries have forked out hundreds of dollars per person for a chance to partake in this aerial banquet. There's even a permanent set-up in Las Vegas, where mid-air meals have become a daily occurrence.

Not surprisingly, headlines proclaiming the franchise's imminent debut in South-East Asia and KL were greeted with a sort of fervour rarely witnessed in the local culinary world. Within 48 hours of its launch, the seats for Dinner in the Sky: KL edition were sold out despite its hefty RM599 (S$205) price tag. Event organisers decided to add a few extra dining sessions each night - including Dessert in the Sky, a slightly cheaper, three-course affair - but these sold out even faster. The wait list, which has reportedly run up to the thousands, is still increasing by the day.

But never mind all that: you've scored a seat at the most coveted table in town by virtue of your job.

Now it's your turn to find out what the fuss is all about, but not before spending a good portion of the hour making multiple trips to the toilet - nope, there are no toilets up there - and waiting in breathless anticipation at the pop-up lounge, where waiters flit around with trays of hors d'oeuvres.

Finally, after the first batch of passengers have disembarked - these included celebs and VVIPs like Datuk Lee Chong Wei, Datuk Siti Nurhaliza and Amber Chia, whose shrieks can be occasionally heard from below - you're led to the platform for takeoff, and strapped into the chair like a patient in a mental asylum.

You are joined by Marc Fery, chef de cuisine at Hilton KL's Graze restaurant; his assistant Chef Lam and three other security staff - they assume standing position in the middle, secured by safety harnesses - and 21 other passengers.

Then, the inevitable happens: the table begins its smooth ascent, and someone switches on the DJ console.

With great trepidation, you dig into the evening's first course - tender slices of smoky duck breast and a nest of bean sprout salad, still crisp under its hoisin vinaigrette - as Coldplay's A Sky Full of Stars stream from the speakers. Not bad, you think, vaguely distracted by how everything below you seems to be getting smaller and smaller.

Finally, the platform stops moving and you're 50m up, clutching (pointlessly) at the table and giggling like a schoolgirl.

Maybe it's the invigorating night air or the electric atmosphere, but the next course is your favourite. It's a bowl of resplendent soup made from roasted roma tomatoes, every last drop mopped up with a stick of herb-scented focaccia, and to its side, a single fresh oyster laced with a spoonful of glistening yuzu caviar - a recipe imported from El Bulli, you're told.

While Dinner in the Sky keeps trying new gimmicks - like turning the table into a beach bar or dangling musicians on an airborne stage to serenade diners - they're keeping things simple over here. So it's just you and the expansive view of KL: that of its iconic tower, looming before you like a colossal space-age structure, and further in the distance, KLCC, the city's twin towers.

A flurry of selfie-snapping and Instagram-updating ensues from your companions.

The chair's not very comfortable - your movements are severely limited by the belts and you now know how T-rex must feel at the dinner table - but it can swivel and recline and, hey, that's all that matters when it comes to taking a good picture.

It doesn't help that the wind has picked up over the past half hour, whipping your hair in all directions. Still, you're reminded that it's really not that dangerous.

Dinner in the Sky is designed according to strict German specifications, with all drawings, calculations and simulations tested by TUV Rheinland, a global provider of technical, safety, and certification services.

Meanwhile, the platforms are built in Belgium and are regularly checked and maintained by a team of professionals, some who have specifically flown into KL for the event. And they've got a great track record: The only thing that's fallen off, after 5,000 successful dinners, is a piece of cutlery.

The third course - a piece of black cod cooked in miso and poached daikon - arrives soon after, but any potential it has is snuffed out by the fish's texture, which is neither flaky nor tender.

By the fourth course, the mild panic that has turned you into a rambling idiot has subsided, allowing you to fully appreciate the plate of confit country hen from France drizzled in truffle-scented emulsion. It's delicious but a bit dry - the problem is immediately solved by slicking the chicken in streaks of puree made from green pea and carrots.

Working briskly and efficiently, like a pair of synchronised robots, the chefs deserve full credit for their teamwork and effort.

The menu, while rustic and fairly unadventurous, is well thought out and alternates delightfully between French and Asian flavours. But the thing that impresses you most? Even though the dishes are prepared a day in advance in an earth-bound kitchen and reheated (there's a convection oven onboard) and plated in the air, soups arrive warm, veggies are crisp and everything looks palatable.

Finally, dessert is served. The golden-brown Varlhona chocolate mille-feuille artfully layered with globs of vanilla cream and hazelnut is a lovely end to this blink-of-an-eye, once-in-a-lifetime experience.

Stomachs full and moods buoyant, we descend despite the protests of one woman. "Do we really have to go down? But my knees just stopped trembling and I'm starting to really like it up here!"