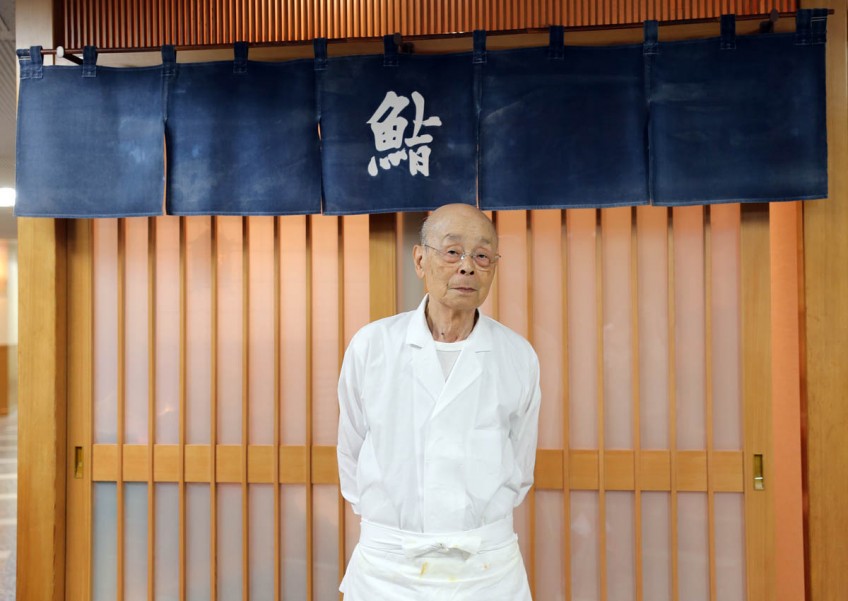 Why are grown men so afraid of a little old sushi chef? Why are we almost having kittens as we stand outside his dingy little Ginza restaurant five minutes early, afraid to peep through the slightly open door in case we violate a sacred space or see something that might confirm the venerable Jiro Ono as, you know, just a guy...?

Never has there been a sushi restaurant so revered and reviled at the same time as the three Michelin-starred Sukiyabashi Jiro. Revered by those who appreciate the 90-year-old's dedication to his craft and the quality of his ingredients, and reviled for the speed at which he makes you eat it and the perceived hostility he shows to non-Japanese.

Much of the online chatter about Jiro Ono usually revolves around how it's not as great as the Jiro Dreams of Sushi documentary makes it out to be, and the generally unpleasant ambience that you have to eat in. Not to mention the near impossibility of even getting a reservation - which involves waiting for the first of each month and hoping to be one of the lucky few who get to eat there the next month.

Luck and a well-connected hotel concierge is one way of snagging a reservation, which is how, thanks to the quick-fingered folks at the Imperial Hotel in Tokyo, we ended up waiting in anticipation outside the well-worn wooden doors of Sushi Jiro.

Whether the place is really full at every meal is questionable, since there were just two other diners apart from us - regulars who came well-prepared with offerings of sweet treats for the man himself who sits quietly in a corner studying a ledger of some sort. He accepts the gifts with a gracious bow and wave of the hand. Without further ado, it's showtime.

A young apprentice who speaks English greets us. You can take photos of the food but not of the chefs, he warns us politely - a welcome surprise since we didn't think cameras were allowed at all during the meal. Where is there time to snap a photo in between bites of sushi? It is slightly stressful but manageable, and we suspect Jiro himself has made provisions for it because instead of the expected 20 to 25 minutes, our meal clocks in at a relatively relaxed 30 minutes.

In fact, the entire eating process is like a well organised, well-oiled ritual that takes all manner of guess work (and unnecessary questions that might cause delay) out of the meal, especially for foreigners.

The entire list of sushi is printed out on a menu in front of you, and you are fed in that order unless there's something you don't like or eat.

The assembly line begins immediately after a little basket of perfectly grilled gingko nuts is placed in front of you. Jiro's son Yoshikazu slices the fish and hands it to his father who shapes the sushi and serves it to you wordlessly, while a couple of young apprentices are on hand to do the kitchen prep.

In all, you get 20 pieces including the final sweet egg custard slice, and they are all the usual suspects of any sushi meal. The taste? Pure, clean, unadulterated but what we can't get over is how each slice of fish literally shines - a kind of surreal glossy sheen we've never come across before, and delicate with barely any seasoning. Beautifully smoked bonito; silken fatty tuna; gristle-free sumi ika; baby scallop and sea urchin; and so on. The seasoning instead comes from the rice - perfect temperature and texture but so vinegary that our palates start wearing out halfway through the onslaught of sushi, while his heavy hand with wasabi has us tearing at times.

When he's served his last piece of sushi, Jiro simply disappears from behind the counter and reappears in his little corner, again going through his ledger. It's the cue for us to adjourn to the little tables for a slice of lusciously sweet and juicy melon - a precious 10 minutes which give us a misguided invitation to relax because on the dot, we're presented the bill of 30,000 yen (S$345) a head plus taxes.

But then comes the surprise. "Would you like to take a photo with Jiro-san?" The young apprentice asks. With that, the genial side of the nonagenarian appears as he good-naturedly obliges with a relaxed photo-taking session outside, even beckoning you to stand beside him instead of posing by himself, shattering all stereotypes of him as the xenophobic sushi Nazi.

Maybe adverse publicity has led him to ease up slightly or maybe business isn't as good as it's made out to be. This is a chef whom other sushi chefs make polite but negative remarks about, attributing his fame more to his age than his ability to make tasty sushi.

Ultimately, Sushi Jiro seems more about exploring a legend than having a good meal - although we're sure that if we could have an extra minute to savour each sushi, and if he cut down on the vinegar, our enjoyment would have doubled.

But for now, our main memory is indigestion, albeit tempered by the knowledge that Jiro is still a human being, and whatever pedestal he is on was built by others, not him. Overhyped yes. Lousy sushi, no. Would we go back again? Well, we're not in a hurry...

This article was first published on Nov 28, 2015.
Get The Business Times for more stories.