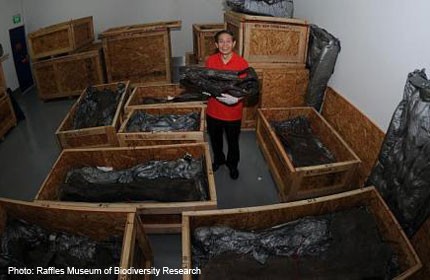 Professor Leo Tan (above) with the crates carrying Prince's bones from Utah, where Prince was mounted outside a lab that later prepared the bones for shipping to Singapore.

They walked the Earth about 150 million years ago and were discovered in 2007-2010 at a quarry in Wyoming in the United States.

The skeletons of three sauropod dinosaurs - nicknamed Prince, Apollo and Twinky - have been reunited in Singapore, where they are set to become star draws at the Republic's first dedicated natural history museum.

Prince, the biggest at 4m high and 27m long, arrived in 27 giant customised crates on Monday. He was shipped in from Utah, where the bones were prepared.

They will be kept in a temperature-controlled warehouse until the Lee Kong Chian Natural History Museum is completed. Located at the National University of Singapore (NUS) campus, it will be ready in the middle of next year.

"I am really pleased and relieved the three are together again and on Singapore soil," said Professor Leo Tan, director of special projects for the Dean's Office at the NUS Faculty of Science. He led efforts to build the museum.

The university's Raffles Museum of Biodiversity Research bid successfully for the fossils two years ago, for under $8 million. Much of the bill was footed by Mrs Della Lee, wife of Lee Foundation chairman Lee Seng Gee.

The foundation also gave $25 million to build the $46 million natural history museum. Designed by W Architects, it will house Raffles Museum's vast collection of specimens of vertebrates and invertebrates as well.

Construction work on the second of the museum's seven storeys will start today.

It has not been decided if the dinosaurs will keep their names.