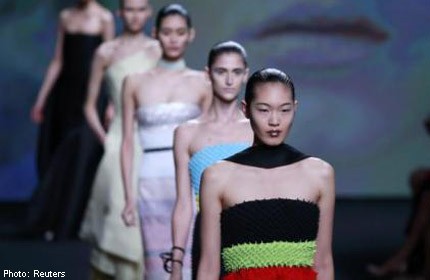 Paris - Celebrated French fashion house Christian Dior sprung for a luxury jet-set tour of the globe at Paris fashion week on Monday, presenting a cross-continental look at haute couture with a collection inspired by the four corners of the world.

Women from Europe, the Americas, Asia and Africa were the inspiration for Dior's artistic director, Raf Simons, in his Autumn/Winter 2013-2014 Haute Couture show, a collection of over 50 looks that unfolded like a smorgasbord of luxe.

Draped silk dresses in shades of periwinkle and coral, beaded petticoats, sequined columns of high gloss sequins and bold tribal graphics - all were designed to appeal to the atelier's well-heeled clientele across the globe.

Haute couture is the creme de la creme of the 212 billion euro ($275 billion) global luxury industry. Within that universe, Dior - owned by LVMH, the world's top luxury group by sales and market value - holds a coveted role as the pinnacle of elegance.

"The collection evolved to be about Dior not just being about Paris and France but about the rest of the world and how many fashion cultures impact on the house and on myself," said Simons in the show's liner notes.

A standout, presumably inspired by Africa, was a floor-length gown that flared at the bottom in a dark brown and white print reminiscent of a cheetah.

Bold stripes in an array of colours - orange and navy, or turquoise and orange - decorated skirts and jackets in what might have been a nod to jaunty American style, described by Simons as "bold, sporty, dynamic and graphic."

Under Simons, Dior has made efforts to woo the who's-who of Hollywood as LVMH expands in the United States, part of a move to ride the rebound in its economy as growth in China slows.

"Haute couture has gained a younger clientele," Christian Dior Chief Executive Sidney Toledano told Reuters after the show, where US film star Jennifer Lawrence sat in the front row. "The Americans have come back strong."

The US luxury market, estimated at 59 billion euros, is seen as the least-penetrated compared with the size of its economy, says consultancy Bain. Europe is the biggest market at 74.2 billion euros, with China-Hong Kong at 22 billion euros.

Paris Fashion Week follows on the heels of collections in London and Milan, where designers vie for the attention of the media and buyers who spot the latest trends and must-have items.

On Sunday, Italian designer Donatella Versace kicked off the week with an Atelier Versace show that featured British supermodel Naomi Campbell on the catwalk.

"I see a woman who wants to reveal but she wants also to conceal," said Versace about the theatrical, body-hugging looks that featured asymmetrical detailing and visible lingerie.