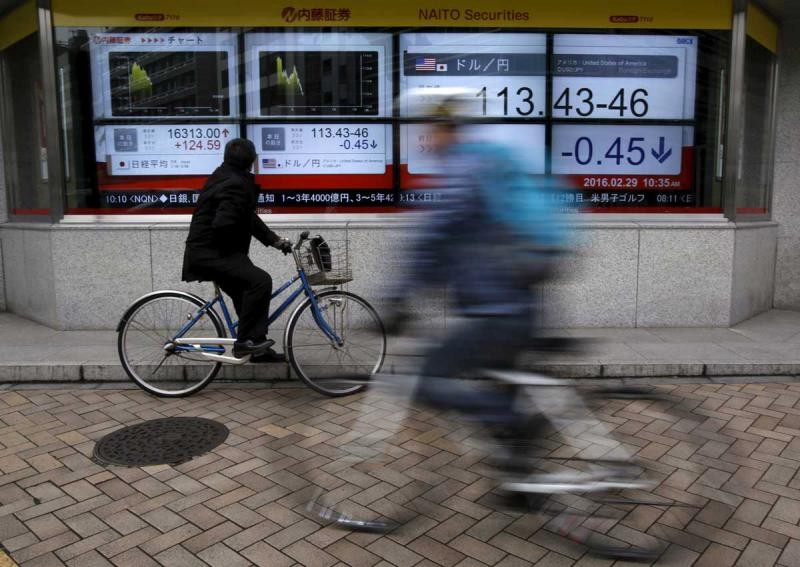 TOKYO/SINGAPORE - The dollar stood tall and set a three-week high against the yen on Thursday, after the minutes of the US Federal Reserve's latest policy meeting rekindled expectations for a June interest rate hike.

While the dollar could see further gains against the yen in the near term, the pace is likely to become more gradual given the potential for dollar-selling by Japanese exporters, said a trader for a Japanese bank in Tokyo.

"There is no doubt that the levels are becoming attractive for exporters to conduct some currency hedging," he said.

A number of major Japanese exporters have set their dollar/yen exchange rate assumptions for the 2016/17 business year, which began in April, at levels around 110 yen to 105 yen.

Among them are major car makers Toyota Motor Corp and Honda Motor Co, which are both assuming an average dollar rate of 105 yen in 2016/17.

The dollar's rebound against the yen no doubt came as a relief to Japanese officials, who were concerned that the yen's recent strength would stifle Japan's nascent economic recovery.

Currency stability is likely to be a topic at the G7 finance leaders' meeting in Sendai, northern Japan on Friday and Saturday. The meeting could expose a rift on issues ranging from currency to fiscal policies within the group of advanced economies.

"I would expect Japan to seek understanding of their FX and monetary policy. However 'dissent' from the US on FX intervention will still remain," said Roy Teo, senior FX strategist for ABN AMRO Bank in Singapore.

Japanese officials are likely to reiterate that they will act if moves in dollar/yen become one-sided and volatile, Teo said, adding that the market's wariness toward possible intervention will probably heighten if the dollar were to weaken back below 105.55 yen.

The dollar index, which tracks the greenback against a basket of six major currencies, traded at 95.237. On Wednesday, the index touched a seven-week high of 95.270.

So far in May, the dollar index has risen about 2.3 per cent, partly on the back of solid US economic data.

"With April activity indicators consistent with a healthy bounce-back in growth, we see risks of two rate hikes in 2016, with the first coming in the June/July time horizon," strategists at Barclays said.

Data earlier this week showed US consumer prices increased the most in three years in April while industrial output and housing starts both rebounded, suggesting the economy was regaining steam at the start of the second quarter after almost stalling early in the year.

The Australian dollar hit a two-and-a-half month low after mixed Australian jobs data sparked some speculative selling though the numbers were unlikely to build the case for an imminent rate cut by the Reserve Bank of Australia.