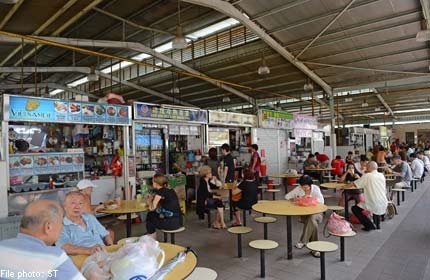 A dispute over hawker centre cleaning took a dangerous turn in the past week, after the credibility of a statutory board was called into question.

Workers' Party (WP) chairman Sylvia Lim's accusation that the National Environment Agency (NEA) was "politically motivated" to tarnish the image of her town council was not substantiated, and unnecessarily elevated the row over the annual spring cleaning of a public facility into a political issue.

Minister for the Environment and Water Resources Vivian Balakrishnan had until then stayed silent on the dispute, which had been reported extensively in the media for a fortnight.

But Ms Lim's salvo prompted him to step in and issue a strongly-worded response defending the NEA's civil servants and rebuking her for the attack.

She was not the only WP MP who tried to insinuate that there were political machinations behind the dispute.

He then added: "However, the Minister should not mistake this to mean that AHPETC can be bullied or is an easy target to be used by the government to score political points."

Again, there was an unnecessary link to politics.

After the barrage of broadsides from different quarters, WP secretary-general Low Thia Khiang sensibly called on all parties to move on. He also avoided any mention of the words "politics" or "political" when interviewed on Wednesday night.

In a sense, it is understandable why Ms Lim and Mr Pritam took the approach of painting themselves as political victims.

This is the first time the WP is running a group representation constituency, after winning Aljunied GRC, which the hawker centres are located in, in the 2011 General Election.

The WP is keen to prove that it has the organisational resources to run an estate well, with all its attendant duties such as cleaning and maintenance of common areas.

Any incident that threatens the AHPETC's reputation would, therefore, be stoutly defended. Election outcomes, after all, can be linked to how well MPs maintain estates under their charge.

A second reason is the lingering perception that public agencies do the bidding of the dominant - and long-time - ruling party, as each reports to a government ministry.

Still, public servants are by definition apolitical, and the statutory boards they work for have a fair degree of flexibility and autonomy in their operations .

These employees' allegiance is not to any political party but to Singapore and Singaporeans, and they form a crucial pillar in the running of the country.

But by playing on the perception that statutory boards have no choice but to accede to requests by the government of the day, the WP's move to link the hawker centre issue to politics would have won them some points in the opposition camp.

Still, a fair-minded Singaporean would be wondering if the WP was needlessly attempting to show it was being victimised.

In future elections, the WP is likely to make further inroads, given the new competitive political landscape and the growing appetite for alternative voices.

Its dealings with public agencies such as the Housing and Development Board, the Land Transport Authority and the NEA will then intensify.

As the WP seeks to gain further legitimacy and standing, it is imperative that it not resort to bringing politics into the mix each time its town councils have a dispute with a public agency, if there is no way to back up the claim. Doing so would not be how a political party which wants to earn the respect of a wider electorate conducts itself.

The party might want to be careful about building up an image as a party that is an adversary to the civil service. Mr Low seems acutely aware of this, stressing in his statements that the party will continue to work with government agencies. Other WP members have said it too, although those remarks tend to lose a little bit of effect when they are but one small part of a statement arguing with a government agency.

The other issue the hawker centre dispute has raised is how to shake off the perception that public agencies are out to do the opposition in.

That is much harder to untangle, but public and civil servants can start by continuing to go about their work in a non-partisan manner.

This will not give the opposition ammunition to say that the agencies are political pawns.

Public agencies can make a more concerted effort to engage opposition MPs. They already work with them on local-level concerns such as midges and the dengue problem, and there have been efforts to reach out to opposition MPs to gather feedback on issues.

But more could be done at the national level, for instance getting senior opposition leaders to attend annual events organised by statutory boards. These include Clean and Green Week, or the Singapore Sports Awards.

Opposition MPs already attend National Day parades together with their PAP counterparts, and if this can be extended to other major events, it can help remove the perception that public agencies work only with the ruling party.

It will show that the agencies are willing to work hand-in-hand with elected representatives from across the political spectrum, to better the lives of all citizens and residents.

As Singapore's political landscape changes, such interactions can also improve the communication and trust between the opposition and public agencies, and keep future disputes to a minimum.

The winners will be all Singaporean.