Doubts grow over Airbus A380 sale to Iran: Sources 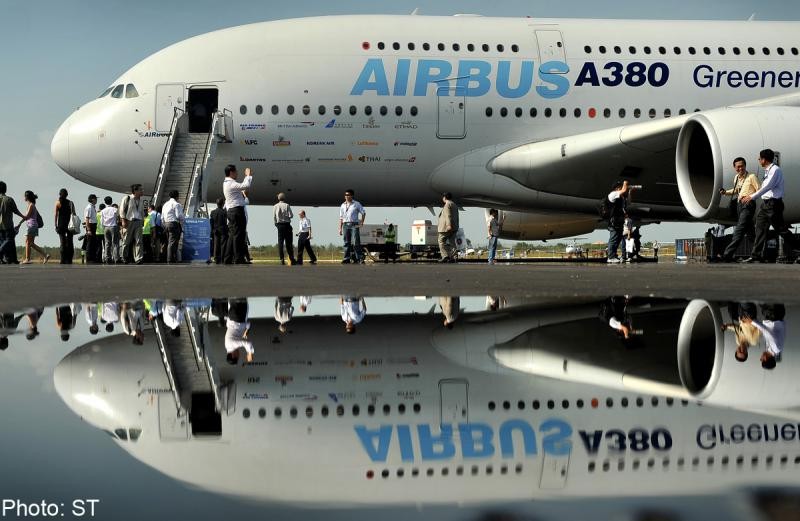 PARIS - As Western planemakers seek to finalise lucrative deals to sell some 200 jets to Iran, doubts are growing over the sale of a dozen Airbus A380 superjumbo jets to the country's national flag carrier, several people familiar with deal said.

Iran's return to the international market for new aircraft after decades making do with an antiquated fleet is one of the biggest business opportunities opened by the lifting of sanctions after a deal to rein in its nuclear programme.

The order for the double-decker superjumbo jetliners grabbed attention in January as part of a provisional deal for 118 Airbus jets worth US$27 billion (S$36.71 billion) signed in Paris in the presence of Iranian President Hassan Rouhani.

The inclusion of the world's largest jetliner was hailed as a symbol of thawing relations and a sign of Iran's determination to compete economically with Arab Gulf states that fly the jet.

The order also threw a lifeline to the A380 itself, following a slump in orders that has left the future of one of Europe's highest profile industrial projects in doubt.

But people familiar with the deal say there are increasing signs that Tehran is having second thoughts about whether to take delivery. "We always made clear this is an option," an Iranian official told Reuters, asking not to be identified. "It is possible to switch to other models," he added.

An industry source familiar with the region said Iran was committed to the rest of the order, but was less interested in taking the A380s, ordered in part for political reasons.

Others said the A380 part of the order, worth US$5.2 billion at list prices, can be cancelled or amended without penalty under the contract before Airbus starts building the jets.

One industry source acknowledged "the A380 part is less solid" than the remaining 106 aircraft, despite the fact that Airbus had pressed Tehran to include the slow-selling model.

Before any of the deal can be completed, Airbus must obtain US export licences due to US technology on board its jets.

Problems in financing must also be resolved as some banks have shied away from financing either the Airbus deal or a similar order for Boeing to sell or lease 109 jets to IranAir.

Those uncertainties have also raised questions over the timing of the payment of deposits to Airbus on the wider order. "Following the preliminary agreement for 118 aircraft signed in January with IranAir, negotiations are progressing, and as with all agreements, it takes time for them to be firmed up and finalised," an Airbus spokesman said.

Discussing the Airbus order in February, its chairman told Reuters the A380 would not arrive for another five years and that the airline would in the meantime monitor the expansion of Tehran's Imam Khomeini airport.

While Airbus faces uncertainty over the A380 part of the deal, Boeing appears to have won a slight reprieve for the latest version of its 747 jumbo, which has also been suffering from poor sales.

A person familiar with Boeing's own provisional deal with IranAir said it included four 747-8s.

Both the A380 and 747-8 have seen production cuts as airlines switch to smaller two-engined models like the Airbus A350 or Boeing 777.

But regional sources say Boeing's 747 has a more naturally receptive audience in Iran given the experience of its pilots and engineers in keeping old 747s flying during sanctions.

Eager to prepare for projected transport growth post-sanctions, Iran has ordered a total of seven different types of Airbus and Boeing jet. But some analysts are cautious about how quickly new types, especially ones like the superjumbo, can be introduced without improvements in infrastructure and marketing.