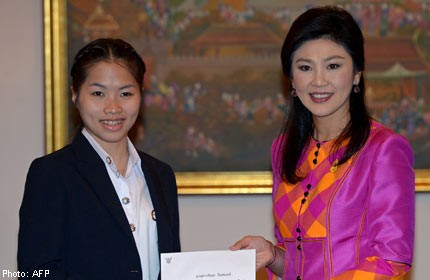 THAILAND - It was a dream come true for Thailand's newly crowned world champion Ratchanok Intanon when she got a chance to sit on the prime minister's chair, at least for a few moments. The teen badminton prodigy was given the opportunity by Prime Minister Yingluck Shinawatra who she met at the Government House yesterday. Ratchanok vowed to practice hard and win an Olympic gold medal.

Congratulating the 18-year-old on becoming the youngest world badminton champion and making Thailand proud, Yingluck urged her to keep up the good work by working hard and maintaining good discipline. The prime minister promised that the government would do everything to help her accomplish her endeavours. Ratchanok, for her part, thanked the premier and said winning an Olympic gold medal is her ultimate goal.

Meanwhile, money started pouring in from all quarters for the badminton star for her historic achievement. At press time yesterday, it had reached Bt3.5 million (S$141,900) and still counting. Bangkokthonburi University, where Ratchanok is studying political science, is planning to provide her a scholarship until she gets a PhD degree. It was also reported that the Royal Thai Police was ready to offer her a job.

Yingluck presented Ratchanok Bt2 million from the sports personnel development division and the teen gave away Bt300,000 to Banthongyod Badminton School where she trains. The prime minister, who took the world champion on a tour of Thai Khu Fa Building, asked her about her experience of playing against former world badminton champion Li Xuerui of China.

Ratchanok said she was thrilled that she could make all Thais happy and proud. She thanked the premier for making one of her childhood dreams come true by making her sit on the prime minister's chair. She urged everyone to try to realise his or her dreams with determination.

President of the Badminton Association of Thailand Pattama Leesawasdrakula, who accompanied the champion to the PM's office, said Ratchanok's success has made the game popular and boosted badminton business by at least 20 per cent. She suggested that Yingluck and her son Supasek Amornchat should take up badminton.

Meanwhile, Bangkokthonburi University executive president Charnchai Chairungruang said the university would support her education until the PhD level. He said the institute has a Sport Science and Sport Management Division to take care of athletes while there are at least five English language teachers and lecturers in the Faculty of Political Sciences to tutor Ratchanok. He said the institute had also set up a sportpersons promotion fund and if Ratchanok wins an Olympic gold medal, she would be awarded Bt5 million.

Minister of Tourism and Sports Somsak Pureesrisak praised Ratcha-nok for being a good role model for youth. He said the ministry would ask for a royal decoration for her.

Meanwhile, Bangkok police chief Pol Lt-General Camronwit Toopgrajank will play a friendly badminton match with Ratchanok at the Metropolitan Police Bureau this afternoon. He said that he and a group of friends have raised Bt500,000 to help cover her training costs and the amount could reach Bt700,000 by the time they meet for the friendly match. Camronwit insisted he wasn't just caught up in a sudden media frenzy following the teenage athlete's recent win, but had contacted her about the friendly match even before she had clinched the world women's title in Guangzhou on Sunday. He said Ratchanok would be able to compete until the age of 30 provided she is disciplined, trains hard and does not get carried away by fame and temptation.