Drones take flight into a world of possibilities 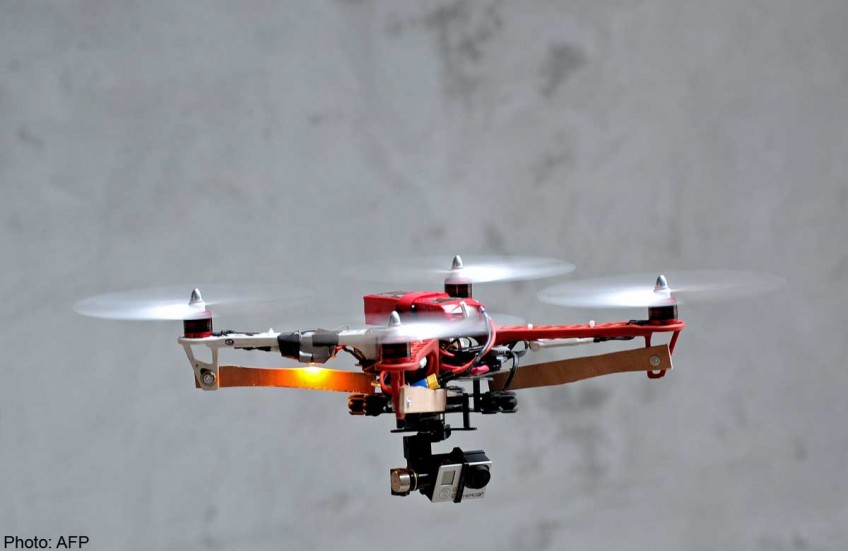 A drone prototype equiped with a GoPro camera is being tested at the headquarters of the start-up Squadrone System on July 2, 2014 in Saint-Martin d'Hères, centraleastern France. The Grenoble-based start-up Squadrone System launched a Kickstarter campaign for the HEXO+, a camera that needs no camera man and can fly and follow whatever target it is given. The campaign reached its $50,000 goal in just one hour, and in less than one day reached its $250,000 stretch goal, which means the company will include live view video feedback in its product.

MONTREAL- Like a well-trained dog, the HEXO+ follows you faithfully wherever you go. But it doesn't walk besides you - it's airborne.

Developed by a French start-up, Squadrone System, the six-rotor HEXO+ - which handily totes a GoPro video camera - is billed as the first autonomous small drone for the mass market.

It's also a prime example of the many ways in which automation will take to the sky as unmanned aerial vehicles, or UAVs, become part of daily life in the not-too-distant future.

Due out in May 2015 with a planned retail price of US$899, the HEXO+ is targeted at extreme sports enthusiasts looking for a way to immortalize their every move.

Users activate it with a smartphone app, then let it fly a few meters (yards) behind them, recording their every twist and turn, up to a top speed of 70 kilometers (45 miles) an hour.

"At the outset, it was great. It was easy. It was going to change everything - and then I quickly realised taking good images involved a lot of logistics when it came to using a drone," he told AFP.

Delerue, whose venture has attracted $1 million in Kickstarter funding (https://www.kickstarter.com/projects/sqdr/hexo-your-autonomous-aerial-camera), plays down concerns that small drones could have a more sinister use, like peering at small children at play in a park.

"Regulations are in place that guard against abusive use," he said.

- Delivery by drone - ===================== In North America and in Europe, advances in drone technology have caught lawmakers on the back foot. They are now scurrying to find ways to regulate the skies.

Unlike military drones, drones for civilian use can only operate for up to 20 minutes and usually cannot carry much more than a small camera. But big business is looking to boost that capacity.

In the run-up to Christmas last year, Amazon, the world's biggest online retailer, caused a stir with its proposal to use small drones to deliver packages (https://www.youtube.com/watch?v=5l22FmvEysA).

Russian fast-food chain Ilya Farafonov isn't waiting. In June it unveiled its first pizza delivery drone, an idea it hopes to extend to the 18 cities in which it operates (https://www.youtube.com/watch?v=5l22FmvEysA).

For some drone enthusiasts, food deliveries via drone is a waste of time.

"This is total nonsense. Why the hell would you do that?" asked Andreas Raptopoulos, chief executive of Matternet, a start-up that's exploring ways to put drones to work in developing nations for humanitarian purposes.

Raptopoulos envisions a network of drones that can ferry food and medical supplies into conflict zones or areas hit by natural disaster.

Matternet has already carried out trial flights in Haiti (http://vimeo.com/51498640), and in September, it aims to shuttle blood samples in conjunction with international medical charity Doctors Without Borders.

Since December, the United Nations has used drones in eastern Democratic Republic of Congo to monitor rebel activity along the borders with Uganda and Rwanda (http://www.unmultimedia.org/tv/unifeed/2013/12/drc-drones-launch/).

"Used imaginatively, future drones could detect stirrings of ethnic conflict, find survivors amid rubble, or even perform fanciful functions such as body-temperature surveys of populations to hunt killer outbreaks," said Jack Chow, a former US ambassador and expert on global health diplomacy, speaking at the Canadian International Council think tank.

Rural districts remain a more welcoming environment for drone flying, where farms can embrace the technology to evaluate soil conditions, guide tractors or assess the most effective way to spread fertilizer.

Two years ago, French entrepreneur Vivien Heriard-Dubreuil, seeing opportunity in the countryside, founded Flyterra, which is based in New York with operations in Quebec.

"Using drones to maximise harvests is very promising," he told AFP, adding that his drone fleet can also be useful to inspect mines, dams and windmills.

There's a cultural side to the drone revolution as well.

A group of Australians recently launched the I-Drone, which with its powerful video projector has turned outdoor walls in Melbourne into movie screens after dark (http://vimeo.com/98604521).

And in Japan, a contemporary dance troupe presented a show in May that explored the relationship between technology and the human body. Scenes featured three dancers - and as many drones (http://www.youtube.com/watch?v=HQLORg5COiU).