Duck of the Irish 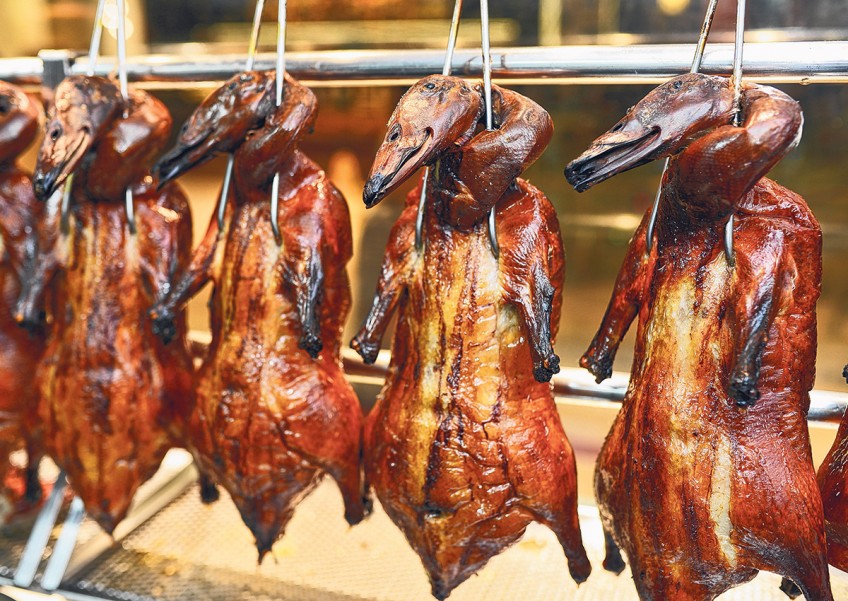 Ducks from Ireland are all the rage with restaurants here, with at least 13 serving them.

The restaurants include London Fat Duck in Scotts Square; Four Seasons Chinese Restaurant in Capitol Piazza, an offshoot of the famous Cantonese restaurant of the same name in Bayswater, London; Legendary Hong Kong in Jurong Point and the TungLok group's Chinese restaurants.

A new entry to Singapore's food scene, Kam's Roast Goose from Hong Kong, might also use Irish ducks for its roast duck, when it opens here by the end of the year.

Chinese restaurants in London, such as Four Seasons, use the same birds.

Most come from the family-owned Silver Hill Farm in Monaghan, north of Ireland. They are raised according to the specifications of the restaurants and are usually slaughtered when they are 42 to 45 days old.

These free-roaming ducks are fed a grain-based diet and raised in a calm environment with soft music playing in the background, which relaxes their muscles just before they are slaughtered. This makes the meat less tough.

They are also defeathered by hand, which reduces bruising on the skin.

Its director, Mr Jarrod Seah, 42, says he is in talks with three or four Chinese restaurant chains here, which also want to use the ducks, even though they cost 30 per cent more than other ducks.

Co-owner of four-month-old London Fat Duck, Mr Mervin Goh, 43, calls the ducks "the wagyu of ducks" because, like well-marbled Japanese beef, the birds have a high fat content. The restaurant sells about 120 ducks daily.

He says: "Roasted Irish ducks are more fragrant and juicy as these meatier birds have a good amount of fat that makes the meat more tender and flavourful."

TungLok swopped Malaysian ducks for Irish ducks across 10 of its Chinese restaurants.

Now, TungLok Xihe Peking Duck Restaurant at The Grandstand and Orchard Central use Irish ducks for its signature dish.

The light and crispy skin is the result of a three-day drying process before roasting.

The other restaurants include TungLok Signatures, which has four branches including at Changi City Point and VivoCity, and Lokkee in Plaza Singapura. They serve Cantonese-style roast duck.

Mr Andrew Tjioe, TungLok's executive chairman, says: "Irish ducks do not have a gamey smell and are more succulent, whereas ducks from Malaysia are skinnier."

The restaurant group will import 4,800 to 9,600 frozen ducks from Silver Hills Farm every two to three months.

TungLok XiHe Peking Duck Restaurant uses "the wagyu of ducks" in its promotional materials, similar to the tagline of London Fat Duck.

Mr Tjioe says: "We have been using 'wagyu' as a generic word to describe top quality meats, such as Kurobuta pork and Welsh lamb for the past five years, so that customers can easily understand what we are selling. It is not an exclusive term."

However, Mr Goh says: "It is depressing to see that a big industry player is taking the lead from a 'fresh graduate' in the Chinese restaurant scene."

He adds that the duck is not "a nuclear weapon that can win the war", saying there are other factors such as pricing, cooking methods and dining ambience that come into play.

Four Seasons Chinese Restaurant, which opened in April this year, welcomes the competition, so that more diners can become aware of Irish ducks, and can go to the restaurant that cooks them to their liking.

It imports Irish-breed ducks from a farm in Holland that is a joint venture between the restaurant and a London-based duck supplier.

Mr Richard Chua, 38, regional manager of Royal China Group, which owns Four Seasons here, says that the ducks at Four Seasons are leaner and appeal to the health-conscious.

The restaurant sells up to 100 roast ducks a day.

Other restaurants are taking all this in their stride.

Min Jiang in Goodwood Park Hotel and One-North use ducks from Malaysia. A restaurant spokesman says daily sales of more than 30 Peking ducks have not been affected.

"With more new restaurants, diners across different age groups will take a liking to this traditional dish," she says.

Data scientist Shawn Loh, 27, who has tried the roast duck from Four Seasons Chinese Restaurant, says: "The meat was moist and tender, but what made the dish memorable was the soya sauce-based gravy, which was slurp-worthy."