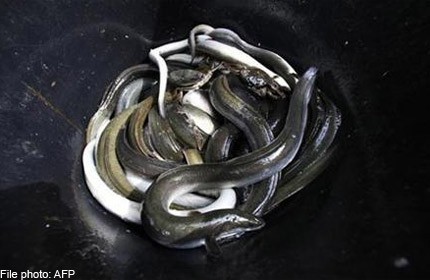 NIEUWENDIJK - On an autumn morning on a small Dutch canal, fisherman Aart van der Waal pulls up a fish trap stuffed with squirming eels - not for the pot, but as part of a bold initiative to save the critically endangered species.

Weighed and recorded, the serpentine swimmers are then carried several hundred metres (yards) across a dike in a plastic bucket, before being released back into the water on the other side with an unceremonious splash.

Once in the Haringvliet, a North Sea estuary some 15 kilometres (nine miles) downstream, the rescued eels will complete their final freshwater swim, before tackling an arduous 7,000-kilometre journey to spawning grounds in the central Atlantic Ocean.

Twice a week, Van der Waal sets out on his flat-bottomed boat to pull up the traps as part of an ambitious plan to help save Europe's decimated eel population, an indicator species for the health of the continent's estuaries and seas.

As part of "Eels Over The Dikes", some 50 volunteers consisting of professional and recreational fishers backed by funds from a fishing-industry foundation, the Dutch government and the European Union, lend a hand to help these mysterious creatures get back to the sea.

Over the last three decades, European eel numbers have been devastated, falling by as much as 99 per cent in some areas, according to EU figures. One of the main reasons is that eels, which migrate from sea to fresh water and back, often find their paths blocked or are killed or injured when they swim through pump houses, sluice gates or hydro-engineering projects. Poaching and over-fishing, pollution and climate change also play a role in the decline of the eel population, which "European member states are doing too little to save," European MPs said last month.

Young transparent eels are known as "glass eels" and they have become particularly prized in Asia over the last 15 years, mainly to be fattened in farms, as a result of which the price of glass eels in the mid-2000s exceeded that of caviar.

The European eel (Anguilla anguilla) is now listed as critically endangered by the International Union for Conservation of Nature (IUCN) on its Red List of Threatened Species.

Eels are complex migratory animals, believed to hatch in the Sargasso Sea, before drifting back to continental shores on the currents. Eels can live for more than 80 years, during which they swim many thousands of miles.

As young "glass eels", they enter freshwater systems which they use as nurseries to grow and mature, before heading back to sea.

In the low-lying Netherlands, reclaimed land called polders, surrounded by myriad small canals and ditches, form the ideal eel habitat. Getting in and out of this "polder paradise" however presents the greatest obstacle to the eel, as water levels differ on both sides of the dikes.

"Because we have to constantly pump water across the dikes to the sea to stay dry, thousands of eels try to swim through the pumping stations and inevitably get caught in the blades," Van der Waal said.

Last year, the Sustainable Eel Fund Netherlands foundation (DUPAN) funded a pilot project to see whether it would be possible to catch the eels before they are sliced to pieces and carry them safely across the dikes.

The pilot project was a success, with some 4,600 eels safely transported across dikes at 11 pumping stations.

In April, May and June this year, the foundation's helpers released more than a million baby eels in lakes and canals across the country to restock their numbers.

Wednesday marked the official start of the "Eels Across The Dikes" project, backed with around 230,000 euros (S$388,000) in funds from the Dutch government and European Union.

It will run around the country until December in 23 spots. "The Dutch have been fighting against the water since the 13th century," said Alex Koelewijn, DUPAN's chairman.

"When we built coastal fortifications against the water we never took into account that there are fish that migrate from salt to fresh water or the other way around.

"The only and simple solution is to help the migrating eels across the dikes," he told AFP.

London-based Sustainable Eel Group chairman Andrew Kerr said eels are seen across the continent as "a very important indicator species." "If eels suffer, it means that we're getting it wrong in terms of how we manage our wetlands and our oceans," he told AFP.

The Dutch project served as an example to other European countries, where thousands of eels face similar obstacles, he said. "A project like this is part of the solution for saving our wildlife," said Kerr.

For Van der Waal, who's been fishing since he was a teen, it's personal. "These eels are like kids, they need a little love," the burly fisherman laughed as he set out once more to pull up another eel-filled "fuik" (trap).

"We have to help them across these bumps, otherwise we may in the future have none of them left," he said.