Eat with the belly, not the brain 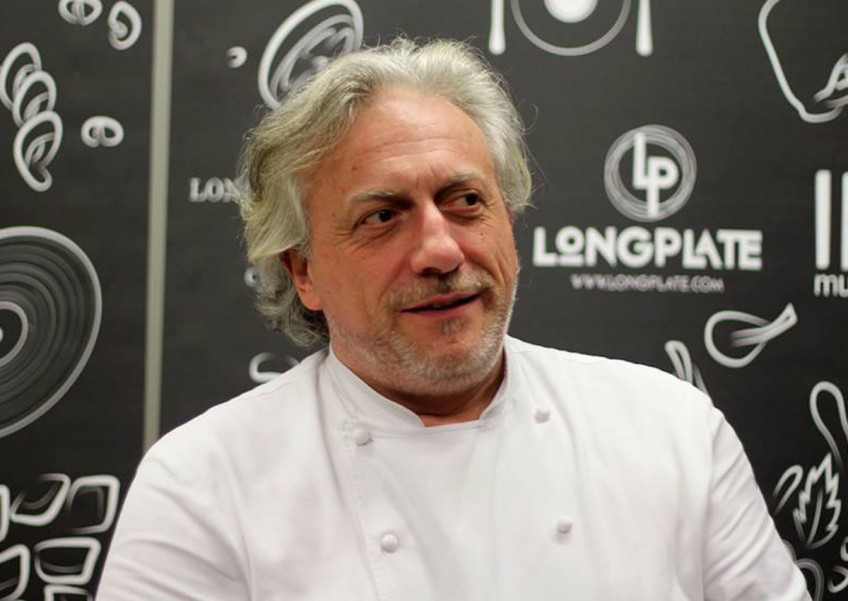 When you dine at the two- Michelin-starred Combal.Zero in Turin, Italy, be prepared to leave your brain at the door. The contemporary Italian restaurant serves cutting-edge and enigmatic- looking dishes that blur the boundaries of textures, shapes and temperatures.

Take one of its trademark dishes, Cyber Egg, for example. The futuristic-looking dish has egg yolk, vodka, caviar, shallots and white pepper packed in a balloon made of cling film.

To eat it, diners have to open the balloon with a scalpel and squeeze the ingredients directly into their mouths.

Chef-owner Davide Scabin says the dish is designed to not give any clues to diners on what to expect. This forces them to "taste the food physically", instead of analysing and anticipating the flavours before eating.

The 50-year-old Italian maverick wants diners to "bypass the brain and eat with the belly".

He says: "Eating is like having sex. You need to shag someone with your body and not your brain; you get more pleasure by experiencing it physically, instead of thinking about how it will turn out."

The chef was in town last week for the annual 4xFour dining series, which invites four prominent chefs to showcase their menus here. The event, which is organised by the same team that runs casual outdoor food festival Savour, is held at The White Rabbit at 39C Harding Road and runs until Friday.

The other chefs are Ollie Dabbous of Dabbous in London, Claude Bosi from two-Michelin-starred Hibiscus in London and Spanish chef Paco Morales of the upcoming restaurant Noor in Cordoba.

As part of Scabin's inaugural cooking stint here, he created new dishes to "build the bridge between Italian and Asian food" - such as The Strange Match, which has a veal fillet roasted with espresso, topped with scallops and Sichuan peppercorns, and served with anchovy sauce.

Another creation is ravioli stuffed with cheese and pepper in parma ham dashi. He also brought along dehydrated pesto, which was kept in space for six months. The salt-free pesto was part of a six-course menu that he created for Italian astronauts two years ago, which included tiramisu and lasagna. The pesto has a shelf life of three years.

Other dishes featured at the 4xFour event included Zuppizza, a de-constructed pizza which includes mozzarella cream and tomato confit topped with toasted bread, and an almond and cannoli soup. They are served at his 13-year-old restaurant Combal.Zero in the historic Castle of Rivoli.

Scabin offered a hidden menu of experimental dishes for his regulars at his first restaurant, Combal, in 1993. It was a trattoria, which served traditional Italian cuisine.

Seven years on, the popularity of the hidden menu grew and the restaurant was awarded its first Michelin star in 2000. In 2002, he relocated and renamed the restaurant Combal.Zero to reflect the constant rebirth of his food.

His eccentric dishes are driven by meticulous research and development. Over the past year, he has been working on the "quadraling concept" which examines the distribution of tastes on the tongue. The chef believes that the tongue moves in an undulating manner similar to a car suspension system.

To complement this concept, he came up with Virtual Oyster, a dish made of a watermelon cube topped with oil, salt, bottarga (cured fish roe) and toasted almonds, and tastes like oyster.

Born to a lorry driver father and a supermarket manager mother, he was inspired by his grandfather, who was an avid home cook, to become a chef.

After attending catering college and working in restaurants in Italy, he worked as a cosmetics salesman for two years before heading back to the kitchen. From his stint selling make-up, he became fascinated with using colours to explore one's personality and tastes.

In the early 2000s, he created a dish of four candies in flavours such as tomato tripe and apple mushrooms and wrapped them in papers of different colours to study how diners picked them up in different sequences.

He also adheres to scientific concepts such as the Golden Ratio and Fibonacci spiral when it comes to cutting ingredients and plating them proportionately.

He says: "It is an extra tool of creating beauty on a plate instead of doing it randomly."

Calling himself a "food designer", he creates dishes that can be perfectly replicated in large amounts by his chefs every day.

The father of a 13-year-old son says: "Whether these dishes are works of art, I leave it to diners to judge."