Eat a meal, spot a star 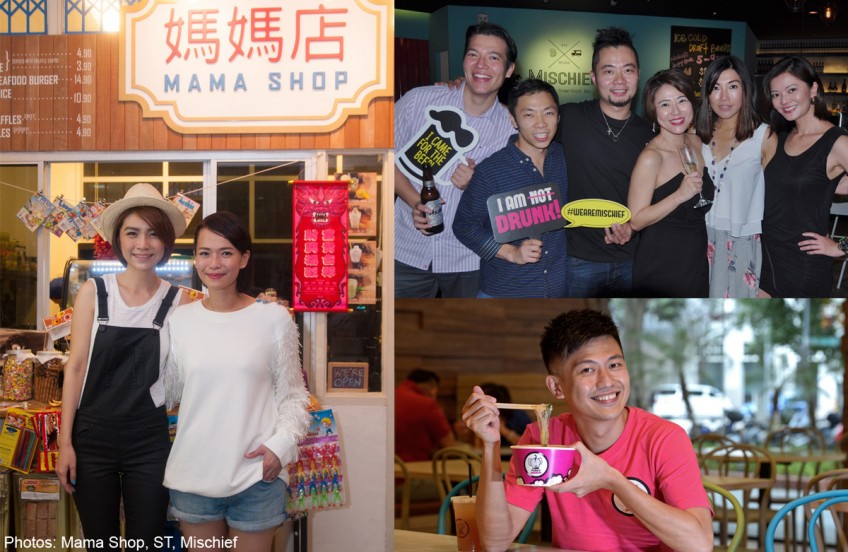 That is possible if you dine at American street food restaurant Mischief, a hip 180-seat restaurant at Esplanade Mall which opened two months ago.

Chong and Koh co-own the restaurant with their long-time friend, former radio deejay Daniel Ong, as well as others from the food and beverage industry including Mr Adrian Mah from nightspot Tab, Mr Varian Lim from Suprette in Jalan Besar and Ms Michelle Kwek from Rookery in Raffles Place.

The actresses join the bandwagon of local celebrities who have opened food and beverage joints over the years.

The celebrities' star power certainly helps in attracting attention to their ventures, from media reports to fans snapping photos when the celebrities are spotted at the outlets.

But celebrity or not, they face the same issues, from manpower shortage to high rental, like everyone else in the food and beverage industry.

And it has indeed been a steep learning curve for many of them.

"I'm still trying to learn from the other partners."

But the former MediaCorp artist admits she does leverage on her celebrity status.

"My value-add is occasionally sitting sexily at the bar in my Lulu wig and costume," she quips, referring to her much-loved on-screen character from TV comedy show The Noose.

MediaCorp artist Koh, 41 - she calls herself a "part-time server" at Mischief - is more hands-on in the business and is there on weekends, depending on her schedule.

On working with the celebrities, Mr Mah says: "Everybody in the group brings something to the table. While we may have the industry experience, we do not have the reach that Michelle or Cynthia have."

Left Profile artist Pornsak Prajakwit, who owns a successful Thai food franchise Porn's, with four outlets, can attest to that.

During SundayLife!'s photoshoot with him at his latest eatery, Porn's Thai Boat Noodee at Kitchener Complex, many excited fans were waving and asking to take wefies with him, which the charismatic TV host obliged with a megawatt smile.

One of the fans was Professor Low Aik Meng, 67, director of alumni at Singapore Management University.

He says: "Pornsak is very enterprising and has a great personality. We've been supporting him and were happy that this noodle place opened. I love the spicy beef noodles and it is priced reasonably."

The 33-year-old Pornsak, who opened his first Porn's outlet in 2010, says: "Being a celebrity saved the business when we opened. It could get the attention of the media and public. But you also have to be very hands-on."

He has come up with what he calls a "Porn's Bible", a handbook to guide franchise partners on running the business.

He has another tip for those looking to enter the industry. "Government grants," he stresses. "We were on the verge of going bankrupt when we opened the third outlet at Star Vista. When you are poor, you start looking for money. That's when I realised that the grants were just money waiting for us."

Some grants he has used include a training one from the Workforce Development Agency.

Even with five eateries, Pornsak's F&B ventures are far from over. The bubbly celebrity has plans to open a Thai mookata outlet one day, as well as a fine dining concept.

But after the initial fanfare, not all celebrity-owned restaurants are guaranteed longevity, especially in Singapore's crowded F&B scene. Just ask comedian Moses Lim and music veteran Dick Lee, who both had short-lived ventures.

Lim's daughter, Ms Grace Lim, 36, who ran the now-defunct porridge restaurant Zhen Zhou Dao at Tanjong Katong Road for just more than a year, says the celebrity status can be a "double-edged sword".

"It is good because people know that the restaurant is opened by a celebrity. But if they have a bad experience, the mistake gets magnified because it is supposed to be a celebrity restaurant," she notes.

The restaurant closed due to a lack of manpower and high rental.

Another restaurant which opened to much fanfare in December 2012 was Modern Asian Diner (Mad) at The Grandstand, a joint venture between singer- composer Lee and TungLok's chairman Andrew Tjioe.

It closed in March last year and the space was taken over by seafood restaurant Dancing Crab and pancake joint Slappy Cakes, in which Lee has a share.

Lee, 60, says: "I believe it was an issue of wrong location, as the concept was too adult for a place where families frequent. Given a better location, it could work again, but now's not the time to re-open."

It certainly takes more than a famous name to run a profitable restaurant.

Mr Francis Poulose of F&B consultancy Poulose Associates, says: "It doesn't matter whether you are a celebrity or not, product, location and pricing are what will resonate with diners who will determine whether the restaurant is successful or not."

Indeed, the celebrity factor has no extra pull on marketing executive Poh Zu'en, 23, who is more particular about the food quality.

She says: "I will go try their food only if many people rave about it, or if there's a special menu or dishes. I don't mind trying out Porn's or Mischief, but it's not because they are owned by celebrities."

Mr Alvin Goh, deputy director of culinary arts at ITE College West, notes that that the celebrity owners have to be commited.

He adds: "If a celebrity is really serious about food and opening a restaurant, their commitment needs to be with the restaurant. If they can't cook, at least have a good chef to helm the kitchen."

While most celebrities who have had failed F&B ventures have not tried their luck again, actor Adam Chen does not believe in being once bitten, twice shy.

After his first venture, Japanese burger joint R Burger, closed in 2013 after four years, he continued investing in F&B concepts, which are thriving.

He and four other partners have invested $1.5 million in the four-outlet Five bar chain, Park cafe at Holland Village, and Ikki Izakaya in North Buona Vista.

And slated to open next month is Golden, a bistro specialising in food cooked with the sous vide technique (slow-cooked vacuum-sealed ingredients in an even temperature hot-water bath). It will be at independent arthouse cinema The Projector at Golden Mile Tower.

Chen says: "The celebrity status is definitely a boon more than a bane. But having said that, I can't shake the feeling that there are always people on the sidelines waiting to see if you fall on your face."

When: Opened in June 2003 but closed a year later

When: Opened in June 2003 but closed less than a year later

This article was first published on April 26, 2015.
Get a copy of The Straits Times or go to straitstimes.com for more stories.