EC e-applications not translating to sales 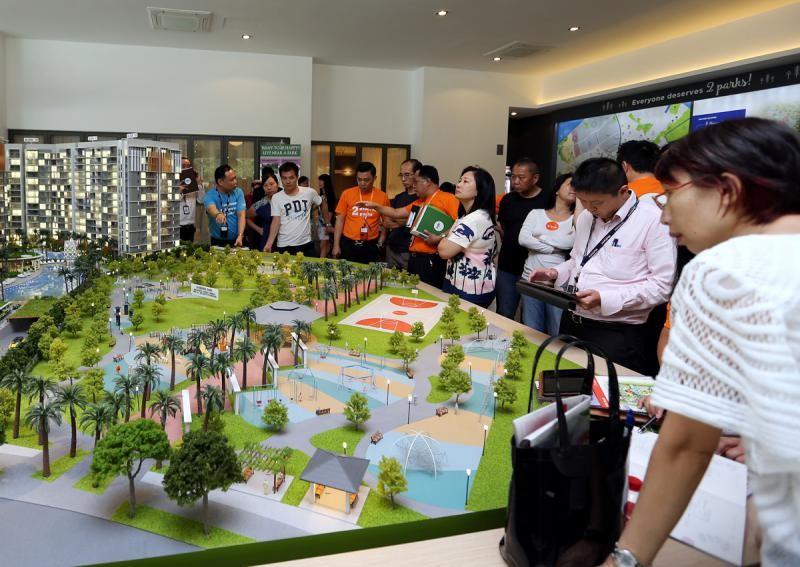 The strong interest expressed for recent executive condominium (EC) projects in the form of e-applications have not resulted in actual launch sales - a trend industry players say is pointing to a potential supply overhang of ECs in the short-term, one which could take one to three years for the market to digest.

Though most of them say a conversion rate of 20 to 30 per cent from e-applications would be reasonable in today's market, half the 14 EC projects launched since 2014 have fallen short of a 20 per cent conversion rate in their launch weekend.

The most recent launch was Parc Life, jointly developed by Frasers Centrepoint Limited (FCL) and Keong Hong Holdings. It sold 8 per cent or 51 out of 628 units during its April 30 launch weekend - after reporting that it had more than 700 e-applications.

The Visionaire, a 632-unit EC project by Qingjian Realty, sold 158 units at its launch the week before, despite also having been over-subscribed with 859 e-applications.

SLP International executive director Nicholas Mak said the poor take-up rates in EC projects is a case of oversupply: "It's just too much for the market to digest in that span of time. Demand for ECs in suburban areas tend to be limited to upgraders or people who live in the area."

This is particularly so for projects launched back to back in the same area, so they fight for the same pool of eligible buyers, market players say.

In Yishun, The Criterion was launched soon after Signature At Yishun last October. These projects end up "sharing" conversion rates as potential buyers would have signed up for multiple projects.

Mr Mak said: "The expected increase in EC buying demand due to the raised income ceiling did not materialise because the government also increased the income ceiling for HDB flats.

"These BTO (build-to-order) flats become an effective competitor to ECs. Especially when the job market is uncertain, people will opt for the cheaper and safer option of public housing."

Century 21 CEO Ku Swee Yong said the recent numbers are "conclusive evidence that demand is exhausted" for the public-private housing hybrid. He believes the market will take at least two years to absorb the unsold launched EC units, based on the current pace of sales.

The hike in monthly household income from S$12,000 to S$14,000 last August should have added another 80,000 eligible families, he estimated. "But even with freebies and discounts thrown in, the conversion rates in EC projects are still poor. It must mean that these families probably do not qualify as they already own private properties, or they want to upgrade from HDB to private, or they are not interested."

KF Property Network managing director Tan Tee Khoon noted that during the heyday of EC launches from 2011 to 2013, the number of applications some EC projects received was easily twice the number of available units. He said: "The demand was strong then because HDB resale and condominium prices were on the upswing. Being the 'sandwich class', HDB upgraders turned to ECs as the more affordable alternative.

"But right now, the prices of condominiums have headed south and HDB resale prices are also relatively stagnant. Besides, there remain 40 to 50 per cent unsold units in previously launched ECs over the past two years. This has impacted the present EC take-up rate."

But the low conversion rates from e-applications have also given birth to a more cynical view that e-applications - which have been used as a gauge of demand for price setting and to assess buyers' eligibility for this class of housing - do not reflect actual demand.

There are some who believe that agencies are under pressure to produce more e-applicants, going by the logic that an apparent long queue will draw out genuine buyers.

After all, no documents are required when one submits an e-application; registering one's interest is free and without obligations.

Agents were also offered supermarket or cash vouchers to incentivise them to bring in e-applications, market sources say.

Last November, Qingjian Realty offered 20 one-carat diamonds in a lucky draw for valid e-applicants for the Bellewoods EC. The project pulled in 700 e-applications for the 561 units; more than 70 units were sold during the launch weekend.

The market was overheated when the take-up rate averaged 60 per cent, he said; he added that loan restriction for ECs under the mortgage servicing ratio (MSR) has had a significant impact. "From the e-applications, half of the applicants may drop out due to MSR," he said.

A spokesman for City Developments Limited (CDL), which is developing The Brownstone and The Criterion EC projects, said: "The EC market continues to remain highly competitive, as ECs cater to a limited pool of eligible buyers and there is increased supply.

"We believe that over time, the sales momentum will go up as construction progresses and buyers can visualise the finished product."

Four EC projects came to the market in 2014, after a nearly one-year hiatus due to the 15-month waiting period imposed on developers from the date they buy the plot of land for the EC to the date of the launch of the project. Only Lake Life by Evia Real Estate was a near sell-out on the back of Jurong's rejuvenation story; it was subscribed 3.4 times during the e-application period.

Despite the MSR that kicked in for ECs since Dec 9, 2013 and a resale levy that became payable starting with Westwood Residences EC project, the majority of EC projects were more than one time subscribed by e-applicants. But their average take-up rate during the launch weekend was about 20 per cent if Lake Life is excluded.

SLP's Mr Mak believes it will take 11/2 to two years from now for the overhang of launched-but-unsold EC units to be absorbed.

EC developers are unable or unwilling to lower prices as the profit margins are quite compressed, he said. This is because after a mandatory 15-month waiting period for developers from the date of land purchase, all financing and development costs for these projects would have already been locked in.

This article was first published on May 6, 2016.
Get The Business Times for more stories.