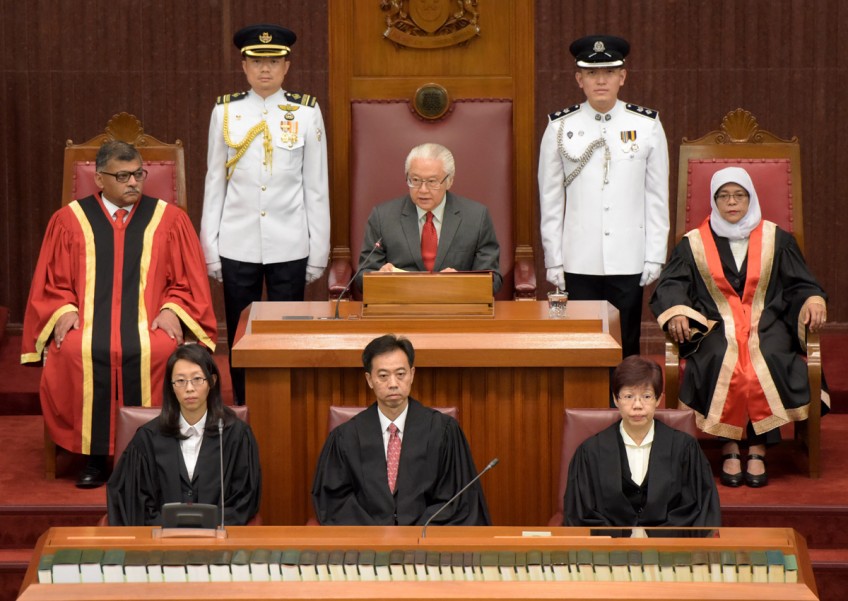 There were no queues to attend the public hearings last week to look into changes to the elected presidency (EP) scheme.

If the empty seats were a reflection of how interested Singaporeans were in the matter, you have to say not many were.

Twenty-five years after the EP was mooted and debated, the experience so far has been largely uneventful, save for two occasions when questions arose about the role of the highest office in the land.

The first was when President Ong Teng Cheong, the inaugural EP, clashed with the Government over what information he was entitled to regarding national assets which made up the country's reserves.

That early conflict made the Government wary of a president who might have different ideas about his role; the first indication perhaps of trouble ahead.

The issue surfaced again in the 2011 presidential election when some among the four candidates saw the EP's role differently from the official view, and campaigned accordingly.

It alarmed enough people who called for more to be done to educate Singaporeans about the nature of the office.

Looking back now, these hiccups were not unexpected, given the novelty and inherent ambiguities of the office.

They might have seemed troublesome at the time but in reality the issues they raised helped the public understand better what was at stake and focused attention on areas which needed greater clarity.

There were quite a few:

What exactly is the role of the EP?

What powers did he have relative to the government of the day?

What sort of person would be most suited to play this role?

These questions surfaced again at the public hearings last Monday and Friday.

It was good the Constitutional Commission headed by Chief Justice Sundaresh Menon touched on them and probed the thinking behind the various submissions.

Reading accounts of the proceedings, especially transcripts of the exchange between law professor Eugene Tan and the panel, what stood out for me were the several contradictions and conflicting objectives that continue to bedevil the EP scheme

I counted at least three.

First, over who qualifies and how he or she is selected.

Candidates have to meet stringent requirements to ensure only those of the highest qualifications would be eligible, but they are then subjected to a national election where popularity might trump merit.

Chief Justice Menon, in fact, highlighted this when he said: "...merit in terms of who might in fact be the best president is not necessarily the same thing as the one who is most likely to win an election. There are two different points there that we might be in danger of conflicting by putting this considerable emphasis on merit."

He was spot on, and it left me wondering which of the two was more important: Having a president of impeccable professional qualification, or one with a strong mandate won through a popular poll?

In an ideal world, you want both.

But voters look at other qualities besides technical competence, and who is to say they are wrong.

The other problem with a national election is that voters expect to have a certain degree of choice available to them. Restrict those numbers too greatly by having overly stringent conditions, and you run the risk of having an election seen as not free or fair.

The second contradiction: The EP is supposed to be non-political and non-partisan but the process of selecting one through an election can be highly political.

Both the CJ and Associate Professor Tan made this point.

This was what the CJ said: "...while the elected president is selected through a political process... the office itself is meant to be non-partisan, non-political to the greatest extent it possibly can."

When candidates fight for election, when they want to differentiate themselves from other contestants, when they are trying to persuade voters to elect them, they have to reveal their political positions on issues.

In fact, going by precedents, quite a few of them were politicians before they became presidential candidates.

How to fight a presidential election without turning it into a political contest for an office that is non-political is a contradiction waiting to be resolved.

The third area of conflict has to do with this question: Which is the more important role of an EP - as a symbol of the country and ceremonial head of state, or as custodian of the national reserves?

I was particularly interested in how the panel viewed it, and, in fact, it stated its position clearly.

"It is first and foremost the Head of State, and accompanying that, there are a range of important custodial powers that go with that."

If he is right - and I think he is - then it points the way to how we view who is best suited for the job.

A symbol of the country, a unifier as some have put it, should be a man or woman who has in abundance the values Singaporeans uphold, someone they can relate to and will be proud to identify with.

If the President is first and foremost this, then it is more important to find someone with these qualities than one who has all the right professional qualifications.

This would argue against making the requirements even more technically stringent, which might make it more difficult to find such a person.

On the other hand, it makes the case stronger for minority candidates to be given a chance of being selected, as a symbol of the country's commitment to multiracialism.

Even when it comes to exercising his custodial duties, technical ability might not matter the most.

A president who can say "no" to a government must have personal and political courage backed by sound judgment.

There may not be that many people who have this in them prepared to go against the entire government machinery, so why limit the numbers and the possibility of missing out on other outstanding candidates?

I hope the panel will help answer these questions, even as it recommends ways to change the office.