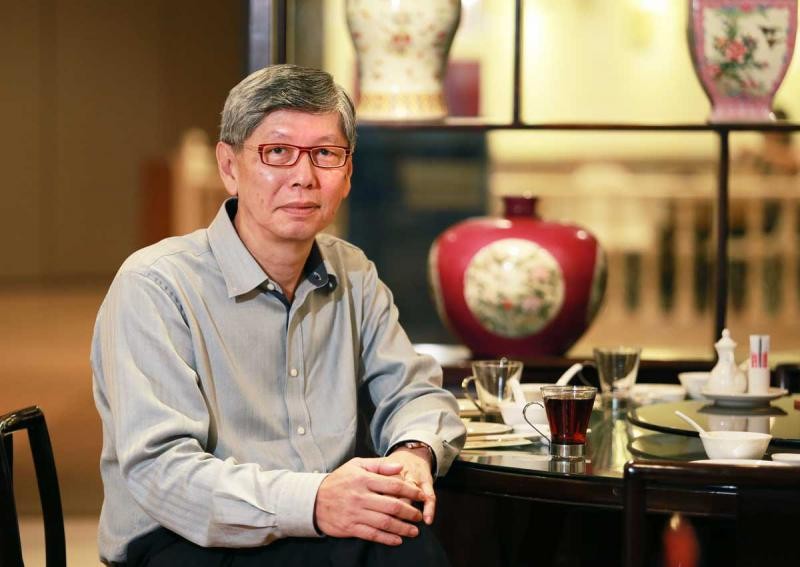 Five minutes into his interview with The Straits Times, Mr Wong, 59, is speaking warmly of the former managing director, Mr Mok Yip Peng, whom he has known since their student days at the National University of Singapore in the 1970s.

We are talking about how long he has been preparing for the top job after having been an executive director of the restaurant group since 2000.

Instead of focusing on himself, however, he turns the conversation to "Ah Mok", the "main founder", he says of the popular restaurant chain known for its herbal soups and home-cooked Cantonese cuisine.

In fact, he is a co-founder of the restaurant, along with two other friends, who are engineers.

That he speaks enthusiastically about his former boss and friend at an interview about himself as the new man at the helm is a telling sign of his modesty, but also of their friendship.

Indeed, the success of Soup, which celebrates its 25th anniversary this year, is built on the strength of the friendship among its partners.

Mr Wong says: "One of the things I'm most happy about is that even though it can be challenging, we are still friends."

The business began in 1991 when Mr Mok, an enthusiastic amateur cook, decided to open an eatery in a Chinatown shophouse Mr Wong recalls: "Mr Mok asked me if I was keen to do a spot of business. It was exciting to be invited to do so. It was a hobby and we had no business plan."

The pair and the other two co-founders launched the business with a capital sum of $100,000.

They kept their day jobs as engineers and hired help to run the restaurant.

However, on weekends and after work on weekdays, they would be at the restaurant serving tables.

Mr Mok would also come up with dishes for the restaurant, including its signature samsui ginger chicken.

The recipe for the dish came from his aunts who were samsui women working as labourers here.

Its comforting, home-style cooking drew customers and the business expanded over the years.

In 2000, Mr Mok and Mr Wong quit their engineering jobs to run the restaurant - which by then had five outlets - full-time.

It became a listed company on Sesdaq in 2007, eventually moving to the mainboard of the Singapore Exchange in 2009.

It also spawned other dining concepts, including Cafe-O, which sells home-grown coffee-shop fare.

Last year, the 18-outlet restaurant group, with branches in Malaysia and Indonesia, posted a $41 million revenue.

Its 25th year in the business will be marked by further expansion under Mr Wong.

He plans to open five outlets and subsidiaries this year - no mean feat in the heated food and beverage industry where eateries spring up and wither within months.

Two more are scheduled to open at Changi Airport Terminal 1 and Holland Village and the outlet in Sengkang will reopen after its renovation. A Cafe-O will also open in Holland Village.

Mr Wong, who has stepped into the spotlight after years of beavering behind the scenes at Soup - in charge of key departments such as administration, legal, human resources and training - says the bold expansion is simply "planning for the future".

Opening at the Raffles Hotel and the airport, he explains, is part of its strategy to appeal to international travellers and pave a way into potential markets such as China and Europe.

In an industry where the glamour of self-made restaurateurs often lies in their creative genius in coming up with new dishes, he is an aberration.

However, he shows how careful corporate planning is just as important in ensuring longevity in the restaurant business.

The road to success, however, has not been free of obstacles, such as a dispute in recent years with sister firm-turned-rival restaurant chain Dian Xiao Er over a sublease for 69 sq m of space at Soup's VivoCity outlet.

The space had been sublet to Dian Xiao Er next door.

In 2014, the High Court ruled that Dian Xiao Er had wrongfully remained on the premises.

However, the Court of Appeal reversed the decision last year and Dian Xiao Er did not have to pay any damages to Soup.

Mr Wong, who heads the legal department at the group, declines to say much of the episode except that it was a "learning curve" and that the silver lining was seeing "the teamwork" everyone displayed, rallying around one another through the tough time.

Words such as "teamwork" and "family values" fall easily from his lips, but he also walks the talk.

He says: "In Soup, when Ah Mok was the head, we respected him as the head of the family, like a father.

"I deal more with people, being in charge of human resources and training. Like a mother, I take care of the children."

He adds that if he and Mr Mok disagreed over business matters, they never hurt each other's feelings.

He says: "I may not have agreed with the way he handled certain problems, such as retaining certain people, but I respected his decision."

The devout Catholic, who is married to a housewife, Madam Thng Cheo Yan, 55, and has three children in their 20s, is also a caring boss.

One of Soup's senior chefs, Mr Cheong Wai Keen, 58, who has been with the group for 24 years, recalls how Mr Wong visited his family when his younger son, then a toddler, was accidentally scalded at home.

Mr Wong, the second of six children, says his humble beginnings and his late parents - a housewife and a teacher - inculcated a down-to-earth attitude in him.

While overshadowed for years at Soup by Mr Mok, Mr Wong's leadership qualities were evident since his youth.

In 1977, when he was a national serviceman, he was part of a hostage-crisis team and he was tasked to negotiate with the hostage-taker who took over a house in Upper Thomson Road with more than 10 people inside.

Of the negotiation process, he says: "I felt no fear because I am not scared of responsibility."

The soldier fired bullets, but no one was hurt and the hostages were rescued when the soldier surrendered after more than 20 hours.

He often cites the incident as part of the leadership training sessions he holds for staff.

Mr Mok, 62, says he has trusted Mr Wong all along, especially when he asked Mr Wong to prepare the company to be listed in 2007, a complex compliance process that he had no gift for.

Mr Mok, who picked Mr Wong as his successor, says: "He is trustworthy. Without him, Soup Restaurant wouldn't be what it is today."

When Mr Wong learns of Mr Mok's praise for him, he says: "Where can you find good friends like that in business? Very few. It's a blessing."