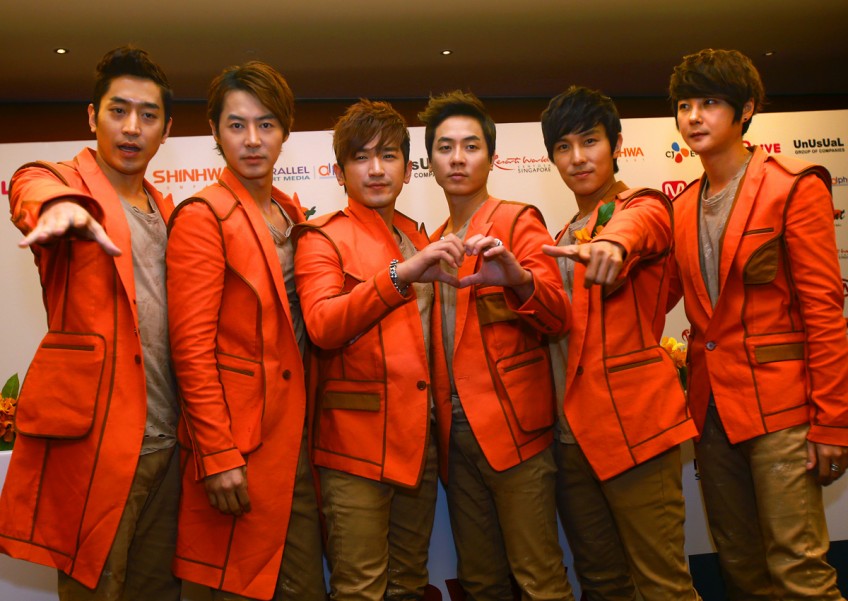 The Korean wave is continuing to wash up on the world's shores, bringing music, television dramas and movies featuring pictureperfect, seemingly ageless stars.

Perhaps more than in any other culture, the South Korean entertainment industry is an unforgiving one, given the emphasis on youth and physical perfection (it is not said to be the plastic-surgery capital of the world for nothing).

So naturally, idols come and go. But a curious phenomenon has been taking place: Even as fans are going gaga over hot new stars, entertainers from the earlier generation are getting a second wind.

We are talking about K-pop groups of the 1990s, "veterans" who have disbanded or been inactive for a while.

Shedding their flawless idol images, they now ham it up on variety shows or open up about their personal lives on reality TV. Otherwise, they take on challenging roles in K-dramas that require more chops than looking good.

A prime example would be Kim Jong Kook, the small-eyed hunky host of the mega-popular gameshow Running Man. He was part of dance music group Turbo, one of the best-selling South Korean entertainers in the 1990s before they disbanded in 2001.

Riding on the popularity of Running Man, Kim has held solo fan meetings around Asia, including one in Singapore two years ago.

Two of the celebrity parents on childcare reality show Oh! My Baby are also former members of top pop groups.

Viewer Janice Tay, 30, first watched the show for the cute children. Only later did the sales consultant find out that the parents were 1990s K-pop idols: Shoo from girl group S.E.S. and boyband g.o.d's Kim Tae Woo.

She says: "I would recognise the babies before their parents, especially Shoo's twins. My colleagues and I often talk about the twins. But now that I know who Shoo and Kim are, it makes me interested to watch them on other shows."

For loyal fans of defunct groups, variety shows are a way for fans to catch their idols in action.

K-pop fan and civil servant Priscilla Tan, 28, caught a 1990s special episode on variety show Infinite Challenge last year featuring performances by Turbo, S.E.S. and hip-hop duo Jinusean. Missing from the line-up was male quintet H.O.T., who she hopes will have a reunion.

She says: "The boybands H.O.T., g.o.d and Shinhwa were all the rage back in the 1990s. They were like the Backstreet Boys, Westlife and 'N Sync of South Korea. Out of the three, H.O.T. are the only ones who have yet to make a comeback. Even if it's a performance of their old songs, it will still be awesome."

Another H.O.T. supporter, administrative manager Valerie Toh, 28, says: "I can't remember when was the last time the five members appeared on a show together. If H.O.T. appear on a variety show, I die-die will watch."

Most fans of 1990s Korean boyband g.o.d - short for Groove Overdose - have grown up with their idols and are likely to be in their 20s, 30s or older.

But one of their biggest fans is only three years old.

This toddler even gets serenaded by the group's lead vocalist Kim Tae Woo - who happens to be her father.

He says: "My daughters really like g.o.d music. Whenever they get into the car, I turn on the music. So Yul really likes our song Saturday Night and tells me to sing it."

The goateed 34-year-old and his two daughters - So Yul, three, and Ji Yul, two - are familiar faces on South Korean television, being stars of the popular parenting reality show Oh! My Baby.

His wife Kim Aeri, who is in her 30s and also appears on the show, gave birth to their son earlier this month.

On the new addition to the family, Kim Tae Woo says: "I imagine that the show will be noisier and more fun. I look forward to seeing how the two elder sisters will react to the baby."

The once-a-week filming provides rare bonding time with his children. "I work almost every day, in the recording studio or preparing for concerts. Unlike company workers, I cannot spend time with my family on the weekends. That's what I feel sorry about," he says.

Pop quintet g.o.d, which ruled the charts in the 1990s, disbanded in 2005, with the members moving on to solo careers.

Kim, known for his dad bod before dad bods were in, enjoyed modest success, releasing his fifth solo album T-Road in June. He also sang on the soundtracks to serials such as My Lovely Girl (2014) and spy thriller Iris (2009).

In 2011, he set up his own talent agency Soul Shop Entertainment, inspired by g.o.d's producer Park Jin Young. Park himself started out as a singer before setting up JYP Entertainment in 1997. His current stable of artists includes girl groups Wonder Girls and miss A as well as boyband 2pm.

Last year, g.o.d reunited to commemorate their 15th anniversary, much to the delight of fans.

Tracks from their comeback album Chapter 8 made the Top 10 list on music websites such as MelOn and Naver Music.

The group also went on a nationwide tour in South Korea, where tickets to their Seoul concert reportedly sold out within half an hour of going on sale in May last year. They also held concerts in Los Angeles and New Jersey.

The recording sessions were also "really fun", he says. "We joked around like before and also had meaningful discussions."

Things seem to be bumpier at his talent agency. On the Soul Shop Entertainment website, besides Kim himself there is only one artist listed, male singer Kixs.

Kim had previously signed on Korean-American singer-actress Megan Lee. He has reportedly nullified her contract after a messy lawsuit.

What star qualities does Kim look out for amid the deluge of K-popster wannabes?

He says: "When you look at a person singing, you can feel it. If the person is truly desperate, they have different eyes - they are glaring and shiny.

"They also have a passionate attitude to music. If you have those qualities, please do not hesitate to come forth."

The fervour sparked by H.O.T even got the country's education board involved. It set rules to ban students from skipping school to watch H.O.T concerts.

After the band disbanded in 2001, the members have gone on to pursue solo careers.

Lead singer Kangta, 35, has collaborated with other artists to release albums.

In 2006, he paired up with Taiwanese-American singer Vanness Wu of F4 fame to release an album under the pop duo Kangta & Vanness.

He is planning to release a solo album in January.

Kim Jong Kook, 39, is well known as one of the hosts of the popular gameshow Running Man.

The muscleman with a high-pitched voice debuted as part of pop duo Turbo in 1995. The group split up six years later.

Kim has released solo albums, but ultimately made a name for himself on defunct variety shows such as X-Man and Family Out.

The girl group Baby V.O.X. (short for Baby Voices of Xpression) were well known for their dance-pop numbers. They underwent several line-up changes, but the most prominent member was arguably Yoon Eun Hye.

She went on to have a successful solo career as an actress. Her breakout role was in hit K-drama Princess Hours (2006). She became famous as a romanticcomedy leading lady in Coffee Prince (2007) and Lie To Me (2011). She has been designing outfits on Chinese fashion reality TV show The Goddesses' New Outfit (2015).

Marking their 17th year together this year, Shinhwa are touted as South Korea's longestrunning boyband. The sextet - all in their 30s - have a packed schedule this year. They released their 12th album We this year and have embarked on a concert tour in Asia. Jinusean (since 1997)

Earlier this year, they released the catchy tune Tell Me One More Time (2015). The title alludes to their biggest hit Tell Me (1997).

Rapper Sean, 42, has a higher profile than his fellow member - for a good cause. Now better known as a philanthropist, he has reportedly donated billions to charities. He also took part in a triathlon to raise funds to build a children's hospital.

YG Entertainment boss Yang, 45, was once part of the legendary hip-hop trio Seo Taiji and Boys, which drew young listeners with their fusion of rap and pop as well as nifty dance moves.

Debuting in 1992, they were a breath of fresh air in the ballad dominated South Korean music scene in the 1980s. Before the band disbanded in 1996, their hits included I Know and Come Back Home.

The trio were named after Seo, who sings, composes and dances. He was once dubbed the "President of Culture" for his influence on music and popular culture.

He has gone on to pursue a solo career. Last year, the 43-year-old released his ninth solo album, Quiet Night, after a five-year hiatus.

The female quartet Fin.K.L were reportedly formed to rival the formidable S.E.S., a popular girl group. Fin.K.L did well with their string of hits, such as To My Boyfriend (1998) and Forever Love (1999), but broke up in 2002.

Now its most prominent alumna is Lee Hyori, 36. She charmed audiences with her down-to-earth persona on the now-defunct variety show Family Outing and released a charttopping single Bad Girl in 2013. She married singer Lee Sang Soon in the same year