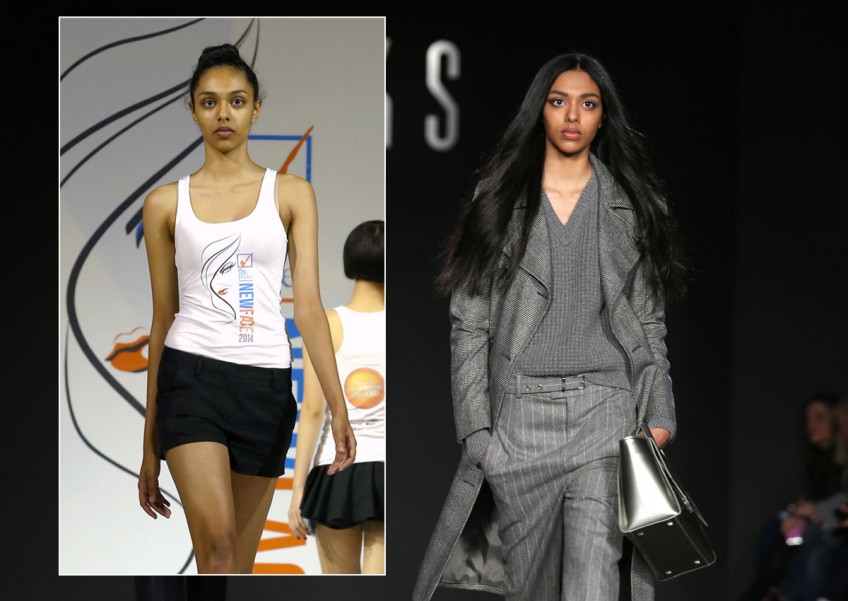 In less than three years, Diya Prabhakar has gone from strutting down the runway on the New Face stage to a much bigger one - modelling for multiple labels at London Fashion Week 2017 (LFW) in February.

The 18-year-old Singaporean, winner of The New Paper New Face 2014, decided to take a gap year after finishing her studies at Jurong Junior College to pursue her dream of being a full-time model before going to university.

Taking part in her first LFW proved to be a hectic but memorable experience for Diya.

She told The New Paper in an e-mail interview: "I've been living in London for three months now, and I'm basically doing shoots and castings.

"I'll probably be coming back for the next fashion week.

"I've only done fashion weeks in Singapore and India, so it's definitely one my biggest modelling gigs apart from my covers for ELLE India and Her World."

She added: "The models and designers were all so lovely and nice, and they made the whole LFW journey really enjoyable."

Scouted in India - where she was holidaying - at 14 by fashion guru Prasad Bidapa, Diya said she fell in love with modelling instantly.

She later signed on with modelling agency Looque in Singapore, and taking part in New Face gave her more visibility here. Her mother agency in India, Anima Creatives, then helped her sign a contract with Storm Models in London.

Diya went to different castings there and ended up modelling for Daks, Toga, Fashion East and Sadie Williams at LFW.

Luckily for the snack addict, she did not have to change her diet much while preparing for the shows.

She said: "But I started exercising more often and even signed up with a gym."

Now that LFW is over, Diya is busy with test shoots, modelling assignments and editorial work for magazines Wonderland and i-D, before she officially hits the books.

She said: "Once I start my degree, I will most likely have to balance both and probably scale back on my socialising."

Not only did she want to hone her skills as a model, she also wanted to do her country proud.

That was why R Nametha, who was first runner-up at New Face 2015, joined the upcoming fifth season of reality TV modelling series Asia's Next Top Model (AsNTM).

The 1.78m-tall beauty told TNP: "I was delighted to know that out of all the girls who auditioned, I was chosen to compete and represent Singapore.

"However, I was really nervous at the same time because I didn't want to let anyone down."

The series, which premieres tomorrow on Star World (Singtel TV Ch 301 and StarHub TV Ch 501) at 9pm, will see 14 hopefuls from Asia competing for the title.

Another Singaporean, Layla Ong, 20, is also in the competition.

The prize package includes a Subaru Impreza, a cover and fashion spread in Nylon Singapore, and a modelling contract with Storm Model Management in London.

Nametha, 18, has been a full-time model for two years now.

On the difference between competing in New Face and AsNTM, the Singaporean said: "(The latter) is a lot more competitive because it's more global, and we represent our own countries so the stakes are higher.

"But one thing that's similar is that I've made some dear friends whom I'll cherish forever." - ELAINE LEE

Now a full-time model, 2013 finalist no longer scared of spotlight

The first South Korean national in The New Paper New Face history, Ji Won Heo, is also making a name for herself in the modelling world beyond our shores.

The 2013 finalist officially kick-started her modelling career in May 2015, and she has since scored gigs for bridal wear brand Lusan Mandongus during Si Sposaitalia Collezioni - a world renowned event dedicated to bridal fashion and formal wear.

Currently a full-time model represented by Body London, the London-based 21-year-old revealed how nervous she was and how she could not wait to finish her walk during her first runway experience in 2015.

But after her maiden LFW stint, she started to enjoy the spotlight "rather than being scared of it".

Heo, who recently bumped into fellow New Face alumna Diya Prabhakar when they were at the same shoot, told TNP in an e-mail: "Funnily enough, now I want the runway to last longer.

"I love having more outfit changes, since it means I would have another round on the catwalk."

On modelling for brands such as Mark Fast, Hallie Sara, A.V. Robertson and Malan Breton at the recent LFW, Heo said it is always a nice feeling to have her agent tell her she has been booked for a show, especially after jostling with so many other hopefuls during castings.

She said: "Working with brands who have such a big and great team inspires you to work harder, and it also gives you more self-confidence."

One downside, however, was suffering an allergic reaction on her eyebrows after LFW.

She said: "They were bleached for one of the shows, and when I dyed them back after LFW ended, my skin had a really bad reaction."

Heo, who has tried boxing and yoga, added that LFW motivated her to hit the gym regularly. Diet-wise, she got into healthy eating - oatmeal is her go-to meal almost every morning - and cooking after she started modelling.

"Fashion week or not, I will always try to eat clean and stay healthy. It is not about the shape of my body but how I feel," she said.

"I do not only look better, but also feel so much better, when eating right." - ELAINE LEE

This article was first published on April 4, 2017.
Get The New Paper for more stories.