8 things to know about Joanna Dong, the next S'porean contestant on Sing! China

Yet another Singaporean contestant has made it to the Sing! China competition last week (July 14), in a televised broadcast of the first episode of the Chinese singing competition, currently in its second season.

Maybe you haven't heard of her before her jazzy audition which impressed Mandopop king and judge Jay Chou, but Joanna Dong, 35, is a local singer, actor and host who has made a mark in our local entertainment industry over a decade ago.

To fill you in, here are eight things about the local vocalist and actress:

Back in 2004, Dong auditioned for Singapore's inaugural "Idol" singing competition, performing "Close to You" for the judges.

While the judges were satisfied enough with her performance to give her a ticket to Caldecott, her outfit received harsh criticisms, as judge Florence Lian asked her to "ditch the auntie get-up", and Ken Lim told her bluntly she needed a make-over. Ouch.

Unfortunately, Dong only reached the Top 40 of the show, which was won by Taufik Batisah. In an interview, Dong said the experience left her "questioning her talent" and thinking that she "was not meant to be popular".

2. She performed in multiple musicals

If you're into local theatre productions, you might have caught a performance by Dong without even knowing it.

A theatre studies student when she was in Victoria Junior College, Dong has been involved in musicals for a decade.

In 2007, she landed a role in a Mandarin musical "If There Are Seasons...", where she won the title of 'Best Supporting Actress' in the ST Life! Theatre Awards 2008.

3. She has starred in films as well

Dong made her film debut in a 2011 local movie "Forever", playing a quirky lovestruck stalker, which landed her one of the ten Star Hunter Awards at the 14th Shanghai International Film Festival that year.

Besides, she also played the lead character in a local short film, "Hidden Folks".

Dong's Jazz EP titled "Lullaby Nomad" was launched in 2008, followed by a concert at the Esplanade Recital Studio.

The album comprises a selection of five songs in English and Mandarin, one of which is a cover version of Chinese classic “Lover’s Tears”.

After which, Dong released multiple singles and original soundtracks, including a Mandarin translation of popular bossa nova piece "Summer Samba" in collaboration with famed Brazilian all-stars band, Bossa Negra, in 2010.

Since then, Dong had became the first artiste signed to local music label Red Roof Records, and released a single titled "Starlight" under the label in 2015.

A compiled version of the pop track in collaboration with fellow Singapore Idol Sezairi Sezali was also released in Mandarin and Malay, as part of "Sing, Love", a SG50 musical project.

More recently, Dong also established herself as a host on two local infotainment shows, "Life Extraordinaire (寻找毅中人)" and "Homeward Bound (我家在这里)", both televised on Mediacorp's Channel U in 2015.

She was also a featured profile in two other similar productions, "The Way We Live (缘走天涯)" and "Love Singapore (新加坡。极爱。极短篇).

Dong is certainly recognised as a up-and-coming TV show host as she was nominated for 'Best Female Host' at the Macau Rainbow TV Awards in 2016.

If you've been mesmerised by her captivating and elegant performance at Sing! China's audition, it's not too late to stop yourself from obsessing over the singer just yet.

Dong wed her husband, Zachary Ho, 39, who is a theatre practitioner and educator, in 2012, after they met on set of "Descendants of the Eunuch Admiral" in 2010.

7. She holds an honours degree in Sociology

Yup, Dong is one of those who possesses the courage to abandon her academic qualifications to venture into the entertainment industry.

In an e-mail interview with Straits Times, the Raffles Girls' alumnus revealed that she loved dancing to jazz music before she even starting singing jazz.

"I started doing the Lindy Hop in my freshman year at the National University of Singapore," she disclosed. "The more I danced, the more I fell in love with the spontaneity, the complex yet groovy rhythms and the lush harmonies."

In 2015, Dong collaborated with local performance company TheatreWorks in a program "50/50" to hold Lindy Hop dance classes over a period of three weeks.

8. She's a proud user of expletives

Claiming to be a "potty-mouth", Dong isn't afraid to admit that she's a frequent user of English and Hokkien expletives, revealing that she's "the first to make a dirty joke out of anything" in the interview with The Straits Times.

While she may be professionally recognised as a singer and actress, one proud moment which Dong called it her "personal triumph", was when she was featured in a clip by her favourite podcast, Radiolab. The clip - for a mashup of people swearing around the world, included a soundbite of Dong letting rip a Hokkien expletive.

Now that we're all caught up, we can't wait to see Dong's next performance in Sing! China, where she'll be mentored by Jay Chou. 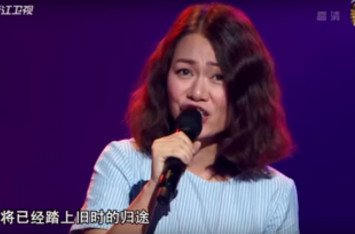