He told the media on Wednesday (Dec 19), while taking publicity photos for the Hong Kong International Film Festival, that he hoped to share in the joy during this festive season, but said he did not know the gender of his second child, reported Ming Pao Daily News.

His wife, model Moka Fang, sparked speculation of another pregnancy after she appeared at a charity dinner in Hong Kong recently looking plumper and with a slightly bigger belly.

The actor also seemed to have hinted as much when he attended an activity organised by an insurance company last month.

Kwok, 53, and Fang, 31, tied the knot in April last year and welcomed a baby girl in September last year. 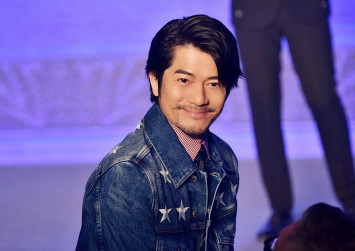 He said on Wednesday that he missed the birth of Chantelle as he was filming in China, so he would not be taking up any filming projects for the first half of next year. He has appeared in two movies this year - fantasy flick The Monkey King 3 and crime thriller Project Gutenberg with Chow Yun Fat.

Kwok said he would go on a concert tour instead.

Fang had said in an interview, less than a year after giving birth to her daughter, that they would try for a second child and hope it would be a boy.