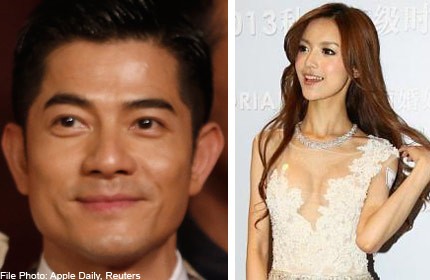 HONG KONG - What a difference a Heavenly King makes.

Model Lynn Hung's career has suffered four months after she kissed pop star Aaron Kwok goodbye, while starlet Anna Kay's fee has tripled since her name was linked to his in the gossip headlines last month, says Oriental Daily News.

Post Kwok, the 32-year-old from Jiangsu province has cut her fee to HK$120,000 but is getting fewer jobs, says Oriental.

Meanwhile, Kay is more famous now than weeks ago, when she was known as one of actor Jaycee Chan's rumoured playmates.

The native of Guangdong province has strutted on catwalks in Japan, and is having a go at singing and acting, after signing up with the agency behind model-actress Chrissie Chau.

After a story last month about Kay's supposed 30-hour visit to Kwok's home, her fee for a public appearance has increased from HK$20,000 to HK$60,000, says Oriental. She has three jobs lined up for late this month, and more than 10 next month.

Kwok, 47, has declined to comment on the new gossip and Kay, 24, has kept things vague.

At a fashion show in Shenzhen early this month, she refused to call him a boyfriend, says Apple Daily. Instead, she described him as a friend she had "known for a long time".