Actor Zhao Lixin has apologised after an uproar over his comments about the Japanese occupation of China during the second world war.

Actor Zhao Lixin has apologised following an uproar over comments he made about the Japanese occupation of China during the second world war.

"Chinese blood is in my bones, I definitely would not make excuses for aggressors," he said. "I strongly condemn the trauma that Anglo-French forces and the invading Japanese army have caused Chinese people."

The row began with Weibo posts that have since been deleted. On Sunday, the actor asked why Anglo-French forces had sacked the Qing dynasty imperial gardens, known as the Old Summer Palace, during the Second Opium War in 1860, Chinese news site Guancha reported.

On Tuesday, Zhao said: "Japan occupied Beijing for eight years. Why did they not loot the artifacts or burn down the Forbidden Palace? Does this fit the nature of aggressors?" according to Guancha. 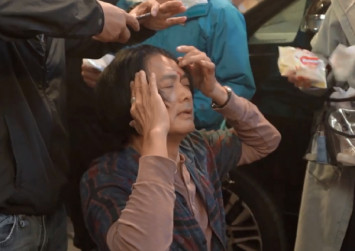 He made comments about the 1860 invasion in response to a social media user who said Anglo-French forces burned the Old Summer Palace because they could not subdue it. Zhao said: "What about the Forbidden Palace? Did they forget or did they not bring flintstones?"

He was referring to the opulent Beijing complex that served as the Qing dynasty's seat of power and which remained largely intact under the Japanese occupation more than 70 years later.

However, it was Zhao's remarks on Japan that led to the strongest reactions. In an opinion piece published on Wednesday, Hu Xijin, editor-in-chief of Global Times, advised Zhao and other entertainers not to wade into politics. Hu said he accepted Zhao's apology.

"The same historical experience and the same regard for the experience are one of the stones that make up the foundation of national unity," it said. "Any form of denial or provocation will attract strong criticism."

Social media was in uproar. The Weibo account for the China Anti-Cult Association criticised what it saw as Zhao's naivety, and reproduced a Beijing Morning Post article that said the Japanese occupation of Beijing resulted in more than 17,000 civilian deaths and injuries while about 3,000 artefacts were looted from the Forbidden Palace.

The official accounts of the Communist Party's Central Committee magazine, Ziguangge, and the Communist Youth League both reproduced the China Anti-Cult Association's piece and added commentary.

Zhao issued an apology on Wednesday, in which he explained he was working on a script that featured the Forbidden Palace, which started the line of questioning.

Zhao, 51, is a Chinese-born Swedish entertainer who worked in Stockholm in the 1990s. He returned to China in 2000 to teach drama and act in television and film. He rose to fame last year after a reality show appearance that showed his language abilities and general knowledge. Zhao has 7 million followers on Weibo.

The atrocities committed by Japan during the second world war remain a sensitive subject for Chinese people and some anti-Japanese sentiment remains. In 2012, demonstrations in more than a dozen Chinese cities flared up after Japan bought the disputed Senkaku islands, or Diaoyutai as they are known in Chinese.

Other celebrities have faced repercussions for perceived pro-Japan stances. In 2001, actress Zhao Wei was photographed wearing a dress that bore an image resembling the rising sun flag used by the imperial Japanese military. The image prompted widespread outrage. The star was forced to apologise on national television and the editor of the fashion magazine where the photo appeared resigned after the incident.