The 'Chasing Pavements' hitmaker had her husband Simon Konecki have officially filed for divorce after splitting up earlier this year and she is now reportedly getting ready "both mentally and physically" to release new music.

A source told the Daily Mirror newspaper: "Adele feels free and is moving on with her life. It looks like the divorce will be straightforward at this stage. They both want what is best for their son."

"She is definitely getting ready both mentally and physically to promote new music. It seems it will happen later this year. She talked about last year as a very difficult year and she's said in the past that creating new music is almost like therapy. You can tell that she is ready to share with her fans."

Adele and Simon - who married in secret in 2016 - announced their separation in April this year but they are "committed to raising their son together lovingly". 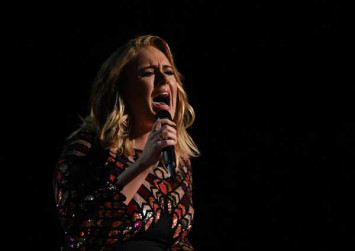 The statement from the former couple - who share son Angelo - read: "Adele and her partner have separated. They are committed to raising their son together lovingly. As always they ask for privacy. There will be no further comment."

For her birthday this year, Adele admitted it had been a difficult 12 months and she felt now was the right time to focus on herself.

She wrote: "This is 31 ... thank f***ing god. 30 tried me so hard but I'm owning it and trying my hardest to lean in to it all. No matter how long we're here for life is constant and complicated at times."

"I've changed drastically in the last couple years and I'm still changing and that's okay. 31 is going to be a big ol' year and I'm going to spend it all on myself. For the first time in a decade I'm ready to feel the world around me and look up for once."

"Be kind to yourself people, we're only human, go slow, put your phone down and laugh out loud at every opportunity. Learning to REALLY truly love yourself is it, and I've only just realised that it is more than enough. (sic)"