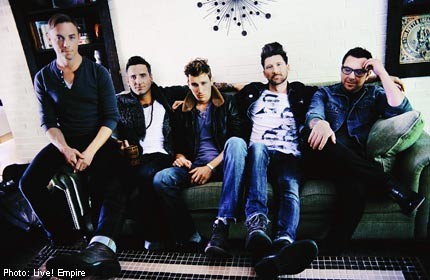 In this age of declining physical record sales, US alternative rockers Anberlin are on a mission to save the craftsmanship of album artwork.

"Our album covers are absolutely important to us, it is very crucial that the visuals we present set the mood for the whole record," said frontman-vocalist Stephen Christian, 33, in a phone interview with LOUD from his home in Nashville, Tennessee.

"These days, more and more people listen to music on their mobile phones. "As a result, album covers have become a dying and almost lost art form. We don't want that to happen."

Over the years, Anberlin - which also comprises bassist Deon Rexroat, lead guitarist Joseph Milligan, rhythm guitarist Christian McAlhaney, all in their early 30s, and 26-year-old drummer Nathan Young - have displayed a knack for coming up with stark yet powerful and highly imaginative images for their album covers.

On their last studio effort, Vital, released in October last year, a couple is seen embracing amid crashing waves.

"Vital is chock-full of uplifting, inspirational tunes. To a certain extent, that picture you see on the album cover dictated the tempo of our record," said Christian.

"Looking at it, you can almost remember the sensation of sea water on your skin." In contrast, Dark Is The Way, Light Is A Place (2010), the band's fifth studio release, contained "dark undertones", he said.

"On the cover, the falling horse in black and white represents a weight of hopelessness."

Anberlin, whose hits include Feel Good Drag, Godspeed and Impossible, are returning to Singapore for triple-bill concert Shut Up & Listen! next week.

They will be joined by fellow US alternative rockers The Red Jumpsuit Apparatus and Australian pop punk quintet Tonight Alive.

Expect them to play tracks off Vital, a record that is dear to Christian's heart.

"So far, reviews (of Vital) have been extremely positive. Across the board, critics are commenting that it's the best album we've ever put out," he said.

"That said, we are never the type of band to repeat ourselves. I'm sure our fans don't want to hear the same 10 to 12 songs on every CD of ours.

"I hope our music stays exciting and cutting edge. You can be sure that our next album will sound nothing like Vital or our previous material."

When he's not rocking on stage with Anberlin, Christian devotes his energies to Faceless International, a non-profit organisation he co-founded in 2006 to combat human trafficking.

The organisation, which organises regular global humanitarian trips, aims to raise awareness about the issue.

"Human trafficking is modern slavery. To me, it's mind-boggling that even in 2013, so many people are still being enslaved," said Christian.

"The world should come together to fight this atrocity."