Arnold Schwarzenegger's KL trip is short, but he says 'I'll be back' 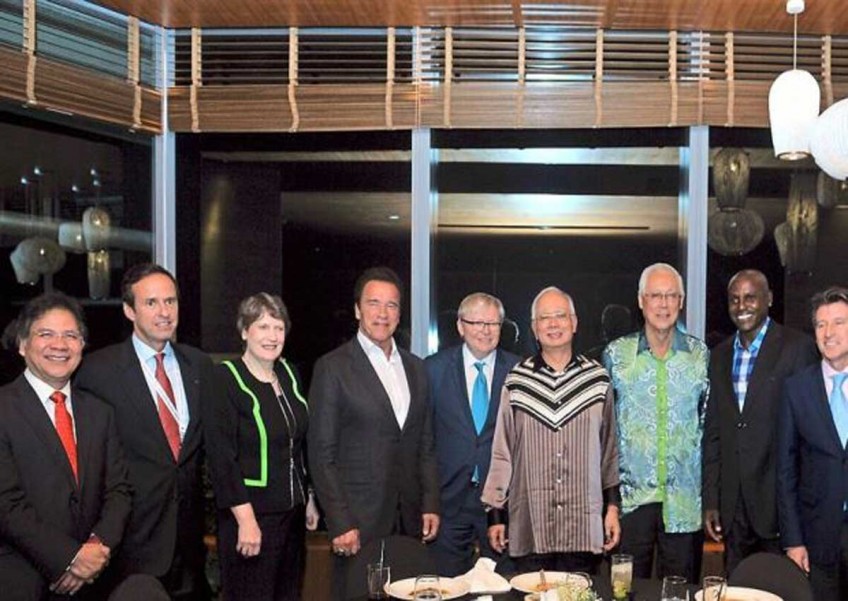 KUALA LUMPUR - Action movie star Arnold Schwarzenegger is on a 48-hour whirlwind tour of Kuala Lumpur and he hasn't had much time to see the city which he has heard so much about.

But using his famous catchphrase, Mr Terminator, who is here to speak at the inaugural Global Transformation Forum, said: "I'll be back, Kuala Lumpur!"

Schwarzenegger first used the line from the 1984 science fiction film, "The Terminator", and he has since used the same line, or some variant of it, in his subsequent movies.

The Global Transformation Forum is the first of its kind, which will see over 16 global key policy makers, corporate figures and experts on one stage.

The celebrity speaker is scheduled to speak today on "Discipline of Action" where he is likely to talk about the several stages of transformation in his life - from a body builder, an actor, a businessman and getting elected as a governor of California.

Speaking to The Star, Schwarzenegger said that he was keen to explore the greener side of Malaysia.

"I want to see the beaches, the greens and the hills I have seen in pictures.

"I am spending less than 48 hours in Kuala Lumpur but I will be back," he said.

Schwarzenegger, who reprised his most famous movie role in the film "Terminator Genisys", said that the changes in his career had been nothing short than dramatic and he would be sharing those stories today.

"My transformation in my career has been dramatic.

"It is fun going back to acting after politics," he said.

Besides talking about leadership skills, he is expected to share his various transformative initiatives, particularly on renewable energy and transportation, during his tenure.

Aside from the former Governor of California - who is a key attraction - the other speakers are the former prime ministers of Singapore, Goh Chok Tong, New Zealand Helen Clark and Australia Kevin Rudd.