Baring all in Paradise

A glance cast his way is all that is needed for Taiwanese heart-throb Ethan Juan to respond accordingly.

There is a tender romance in the Taiwanese military drama Paradise In Service - but it is probably one that moviegoers are not expecting. Leading man Juan, 31, tells Life! that making a film with director Doze Niu is like "falling in love".

Here on Monday to promote the film, which opens in local cinemas next Thursday, he plays the lead role of Pao, a soldier assigned to Unit 831, a euphemism for a military brothel.

After having worked together on the television series Wayward Kenting (2007), as well as on the films gangster drama Monga (2010) and romantic drama Love (2012), Juan and Niu know each other well enough that words are not even necessary.

Juan says: "He'll just give me a glance and I'll know what he's up to."

On the down side, familiarity breeds pressure. "He's seen my performances so I want to come up with something new and different and there's pressure in that."

Indeed, from the macho and tragic Monk in Monga to the shyly stuttering Kuan in Love to the naive Pao in the new film, Juan under Niu's direction has shown that he is more than a pretty face.

Still, their relationship may need a cooling-off period.

Juan says with a laugh that he had asked Niu in jest: "Should we take a break after this?"

Not to worry, though, they are clearly committed for the long haul as they have set up an artist management company, Tian Liang Yu Le (Tian Liang Entertainment), in March last year, together with film-maker Lee Lieh.

Juan is probably looking to tap Niu's knowledge and experience. In the case of Paradise In Service, he was shocked when the director first broached the topic of a military brothel.

He says: "Taiwanese people are aware that Japan had comfort women, but I never thought that in our own land, there would be this unbearably tragic chapter. Yet, not a single word of this is breathed in the history that we study. This has been forgotten."

The film is set on the island of Kinmen from 1969 to 1972 and is also about the soldiers who had to flee China in the wake of the civil war and whose hearts always yearned for a home they could no longer return to.

This struck a chord in Juan as it was his grandfather's story. It was partly why he took up the role: "I've heard him talk about it and seen so many old photographs.

I wanted to narrow the distance between us and, through this film, better understand what he's thinking."

Like the soldiers in the film, Juan's grandfather also longed to return to China. It was a feeling Juan could not understand in the past.

He would say to the elder man: "I'm born in Taiwan and you've been in Taiwan for so many years, so why do you feel that way?"

After making the film, he realised why, saying: "It was the hope and pain of their lives. For us, returning home is a simple matter, but for them, it's a lifetime of waiting."

As for Unit 831, his grandfather said he knew about it, but never went there.

In the film, Juan's character is fully immersed in that world. Pao forms a tentative friendship with one of the women, Nini (Regina Wan Qian), and gradually learns about their stories.

To film an intimate scene, which is perhaps inevitable given the premise of the film, Juan says nonchalantly about how he protected his modesty: "Well, what needed to be done was done.

The key areas were well-protected and the rest was up to the director.

"There was a scene of soldiers showering and naturally, everyone was naked. You can't take any precautionary measures at all so things get revealed.

So by the time I got to the sex scene, I was actually quite used to the nudity. What I was embarrassed about was the fact that the scene involved someone else, a woman."

The embarrassment he confesses to feeling is surprising, since he should be no stranger to sexy shoots as an actormodel.

Moreover, it is not like his long-time girlfriend Tiffany Hsu, 30, is not familiar with such scenes occasionally required in his line of work - she acts and models too.

He says: "Basically, she doesn't say much about it because it's our job. As long as it's reasonable and serves the role and script, then we can both accept it."

He is honest enough to add, though: "Of course, if she sees that, I would feel awkward, but that's about it."

The two have appeared together as a couple on a variety show before, but Juan is not keen for them to work together on a drama.

He reasons: "It might be that the characters come under a lot of pressure or hurt each other and there could be lots of extraneous emotions which are different from real life.

So I don't want real life to be mixed together with this."

Apart from a steady relationship, real life is looking good for Juan.

He won the prestigious Golden Horse Award for Best Leading Actor in 2010 and is part of Taiwan's new crop of leading men, a club that includes the likes of Mark Chao, Eddie Peng and Rhydian Vaughan.

Getting the accolade was great but he adds: "The pressure was enormous, to the extent that a normal person can't imagine it. But it's been so many years and I've gotten used to its presence.

In the end, it's about returning to the performance and you begin to not think about it."

Neither does he let competition with his peers weigh too much on his mind. After all, he has worked with Chao, Peng and Vaughan on Monga and Love.

He says: "We're definitely good brothers. And there's definitely competition. With a lot of job offers, if it's not me, it's him, if not him, then him. But because we're good pals, the competition is a positive thing.

Even if I were up against a stranger, I think of it as something to spur me on."

If Juan seems remarkably level-headed about where he is right now, it could be due to the fact that he languished for years before getting his big break in the romantic TV comedy Fated To Love You (2008).

What does he think had changed for him to achieve the breakthrough?

"Ask the heavens," he replies. "What project an actor gets, and how that allows him to showcase his abilities, it's really hard to say. Sometimes, things just happen.

So in our line of work, it is important to accept, and things don't always turn out the way one wants them to."

But on at least one day a year, Juan gets to call the shots on how he wants things to pan out. The heart-throb turns 32 on Saturday next week, and while he has not celebrated the occasion the past few years, he marks it in a special way.

"Sometimes I'll just disappear. It's the one day of the year when you can disappear and no one would blame you. It would be too tough to work for others even on your birthday."

Paradise In Service opens next Thursday.

HIS MOST MEMORABLE ROLES 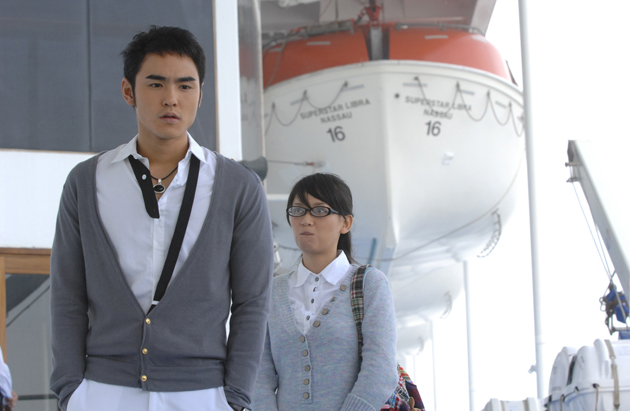 This small-screen idol romantic comedy, about the consequences of an unintended one-night stand, broke Ethan Juan into the big time after six years in entertainment.

His pairing with actress Joe Chen (both right) turned the show into one of the most successful Taiwanese dramas of all time, with record ratings of 7.44 per cent an episode on average.

It won Best Television Series at the Golden Bell Awards and was recently remade into a Korean hit starring Jang Na Ra and Jang Hyuk. 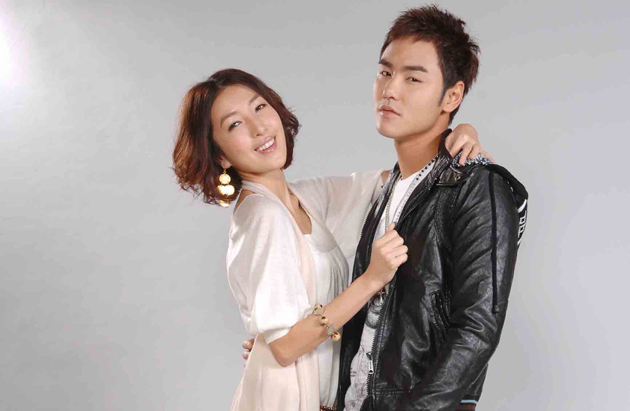 Cougar dreams are made of these - Juan played the desirable younger man to Cheryl Yang's older, single career woman (both right), another pairing so successful that Queen reigned as No. 1 in its time slot for 21 weeks.

With the back-to-back success of Fated and Queen, he cemented his position as a top draw on television. It was remade by the Koreans as Witch's Romance (2014), starring Uhm Jung Hwa and Park Seo Joon. 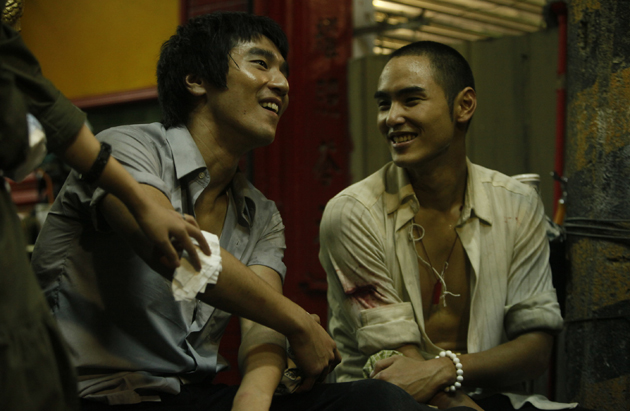 As the macho and tragic hoodlum Monk, who is caught in a power struggle for control of the streets, Juan (above right, with Mark Chao) cut an arresting figure with his buzz cut, easy swagger and some serious emoting.

This was his first big-screen collaboration with director Doze Niu, and it proved to be a winning one as he was named Best Leading Actor at the Golden Horse Awards. Juan also contributed to the soundtrack by singing on two songs. 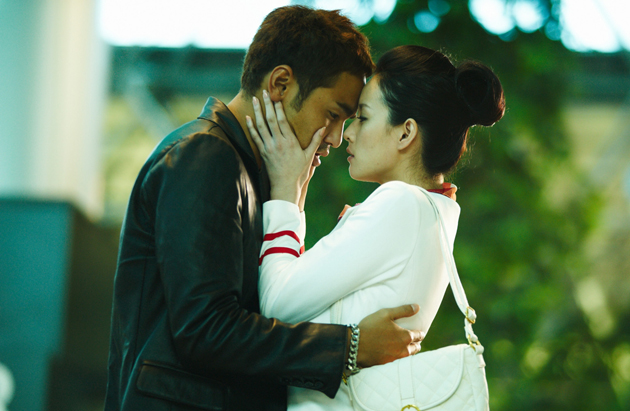 In this big-screen ensemble comedy-drama about love, with a star-studded cast including Mark Chao, Eddie Peng and Zhao Wei, Juan (far left) stood out with his turn as sweet, stuttering mechanic Kuan.

His romance with a jaded socialite played by Shu Qi (left) was improbable, but he made viewers root for the character. It was a role which also spoke volumes of his versatility as an actor.

This article was first published on October 29, 2014.
Get a copy of The Straits Times or go to straitstimes.com for more stories.