Can the BBC save the world?

Will cuddly old Sir David Attenborough have the patience to show us, yet again, the errors of our ways by going once more unto the breach — and onto the beach, and through the rainforest and across the desert — to fill the frightening gaps in our knowledge of the natural world?

As we blithely destroy the ecosystems essential for the survival of everything, the BBC has come up with a worthy successor to The Blue Planet and its stablemates: The Green Planet, a five-part wildlife series presented from the perspective of plants.

Four years in the making and filmed in 27 countries, its globe-spanning episodes are titled Tropical, Waterworld, Seasonal, Human and Deserts.

Indicating the series' importance, the first instalment, Tropical, was shown at the opening of the recent Cop26 in Glasgow, where the real stars of the intensifying climate-change battle received due recognition.

"I don't think any series has looked at the plant world in the same level of detail that we have," says episode producer Paul Williams during a video call from London. 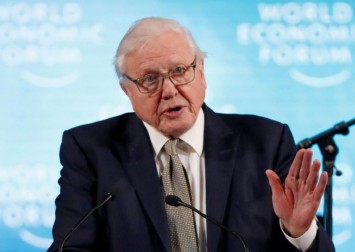 "We took a story approach, where we made individual plants into individual characters, as we do with animals. And we [jointly] built new robotic systems that allowed us to film plants in the wild in immersive ways, to show their growth and tell their stories up close."

That technology soon shows its value in the opening chapter, which visits the Malay Peninsula and the Bornean rainforest.

Time-lapse images captured by a remote-control camera called the Triffid show the blooming of the world's largest flower, a species of Rafflesia, from inside and out. Luckily they can't transmit its repulsive odour — said to be of death.

Fellow episode producer Rosie Thomas hopes viewers will take away from the series the same thing she did: "A whole new understanding of the natural world. I walk into a forest now and see trees in a completely different way."

"The realisation that there's an underground fungal network that connects all the trees and allows them to 'talk' to and help each other is a mind-blowing idea to me. Plants have memory, a sense of smell and a nervous system; being able to share those things with an audience is really satisfying," she adds.

Executive producer Mike Gunton refers to that network as "the wood-wide web", an appropriate term catching on among scientists to describe "this internet of the forest beneath our feet. There's this other world going on all around us that we just don't realise."

As we stumble from "plant blindness to plant awareness", Gunton sees clearly the path to survival humans must choose. "These are our friends," he says. "We need to cherish, protect and celebrate them because we need them — and they will do all the hard work for us if we just let them."

As for a mission statement for The Green Planet: "Make the world green again — that's our plan," he adds.

Promisingly, the reaction to the Glasgow premiere was "very good", says Gunton. "We wanted to show another viewpoint. The series is not just about a warming planet, it's also about a complex ecology. There was positivity because there are some solutions; people need some positive beacons to follow. And there are.

"But time is running out," he warns. "We've all been saying it for years, but now we're standing on the precipice and there's one more step. And once you're off the cliff there's no halfway down — you're at the bottom."

READ ALSO: Not too late to pause and rewind: 20-year-old eco-warrior on how we can preserve and love 'beautiful' planet Earth