Beat the drums for this drummer 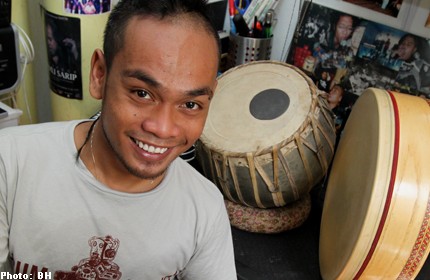 SINGAPORE - don't have to be a doctor or a lawyer to be a successful individual.

Of Mr Riduan, Mr Lee said: "Another example of a Malay person who has succeeded is (Riduan)... who won the Singapore Youth Award this year.

"He has brought the sounds of the kompang and rebana (traditional Malay instruments) to the world, including France, Australia and the US.

"I met Riduan when he performed at a Mendaki event (and) his talent is impressive.

"I watched his YouTube videos. Very energetic and entertaining."

Mr Lee then signalled for a YouTube video of Mr Riduan performing three different styles of drumming to be aired, before saying: "These are not triplets, but a three-in-one performance by Riduan. Good, right?"

In an e-mail interview, Mr Riduan told The New Paper: "I'm flabbergasted! I'm definitely honoured to be mentioned by our PM."

He said the PM's Office contacted him a few weeks before the National Day Rally for a high-definition copy of his Eastern Junglist Massive video.

"I was curious as to why they wanted it... I didn't know what exactly was going to happen."

Mr Riduan had posted the video on YouTube in May last year. And in November, Mr Lee posted a link to the video on his Facebook page after the two met at a Mendaki event.

When Mr Lee gave his speech last Sunday, Mr Riduan was in Madrid, Spain, to play a series of shows. The 28-year-old full-time musician returns to Singapore today.

PM Lee had previously put the video up on his Facebook page. "(My family members) were really happy and kept saying I should have been in Singapore when it happened, especially these past few days when there has been a lot of attention given to me for my drumming and contribution to the community."

Congratulatory messages from schools, community centres, musicians, arts practitioners and friends both home and abroad have poured in on his social media platforms like his personal and artist pages on Facebook and his Instagram account.

He said: "The messages remind me of the decisions I've made in life to get me to where I am.

"I'm very grateful to each and every one who is and has been a part of my life."

His passion for drumming was sparked at a young age when he shadowed his uncle, Mr Imran Ahmad, a Dikir Barat instructor-coach for Sri Andalas, a local group that focuses on the music, theatre and dance of Malay culture.

"I started banging on the kompang, rebana, gendang and gongs when I was seven years old.

"After secondary school, I branched out and started playing different kinds of drums from other cultures, and I haven't stopped since."

Mr Riduan, who is the oldest of five siblings, graduated from Lasalle College of the Arts with a diploma in music in 2007 and is part of local percussion group Wicked Aura.

Without revealing figures, Mr Riduan, who supports his mother and youngest brother, says his income is "enough to lead a normal life with my family and sufficient to feed (ourselves) each month".

He said: "Money wasn't the main reason why I got into this. I was more driven by my continuous curiosity for the different types of drums.

"I don't regret it. Instead, I feel blessed to have worked with countless musicians along the way."

The drummer, who just completed a six-week tour comprising 26 shows around Europe with Kiwi band Batucada Sound Machine, has a gruelling schedule ahead.

He will then leave for Istanbul for another series of shows.