Beauty and the Beast not shelved, but fate still in limbo in Malaysia 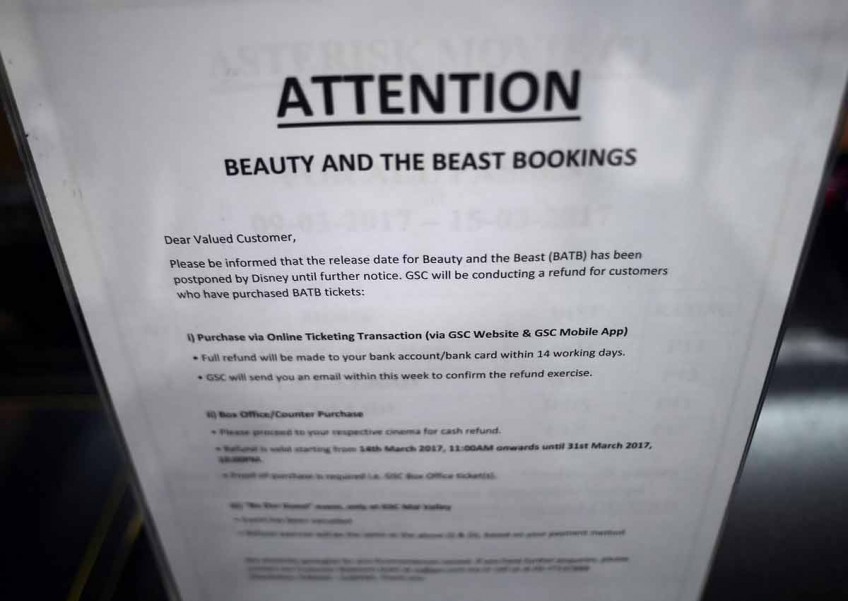 PETALING JAYA - The fate of Disney film Beauty and the Beast is still in limbo although it has been given the all-clear by the Malaysian Censorship Board (LPF).

The film's Malaysian release date, originally scheduled for March 16, has been postponed indefinitely.

The Walt Disney Company (Malaysia) reiterated that the release date is merely postponed and the movie has not been "shelved," as reported by an international news agency.

"Our stand remains that the movie release is postponed. (The) release date is undergoing internal review," a Disney representative told The Star on Tuesday.

Read also: Beauty and the Beast approved with minor edits in Malaysia

The Associated Press reported earlier that Disney had shelved the movie in Malaysia, but did not name its source.

LPF has given the green light for Beauty and the Beast to be shown in Malaysian cinemas with a minor edit.

"The film has been approved with a P13 parental guidance classification, with a minor cut," LPF chairman Datuk Abdul Halim Abdul Hamid told The Star on Monday.

The minor cut concerned a "gay moment" in the film, said Abdul Halim.

He added that the release date is not decided by LPF.

"Once a film receives approval, it means it can be screened. However, the date of screening and where the screening takes place is not under LPF's jurisdiction.

"We only look at the content and give a decision on whether the movie gets approved or not," Abdul Halim said.

Starring Emma Watson as Belle, Dan Stevens as the Beast and Luke Evans as Gaston, Beauty and the Beast is a live-action remake of Disney's classic animated feature, which became the first animated film to be nominated for a Best Picture Oscar in 1991.

In an interview with UK magazine Attitude, Beauty and the Beast director Bill Condon said that the character of Le Fou, played by Josh Gad, would have a "nice exclusively gay moment" in the film.

"He's confused about what he wants. It's somebody who's just realising that he has these feelings," Condon said.

Read also: Beauty and the Beast release postponed in Malaysia for 'internal review'

The "gay moment" has become the centre of controversy. Russia has imposed restrictions on the film, with children under the age of 16 banned from watching it.

A drive-through cinema in Alabama, United States, also banned the film from its screens because of the gay character.

In Singapore, Anglican Bishop Rennis Ponniah issued an advisory urging its clergy and deaconesses to alert their congregation about the homosexual content in the film.

Golden Screen Cinemas and TGV Cinemas in Malaysia are offering refunds for customers who bought Beauty and the Beast tickets following the announcement that the film's local release date has been postponed indefinitely.