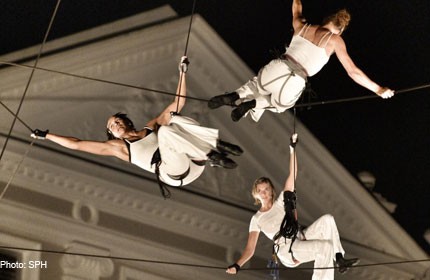 Using ropes as their only support, three aerial dancers from French performing group Compagnie Retouramont showed off their acrobatic prowess in front of the National Museum of Singapore yesterday.

Their performance, called Pyramid of Void, is just one of the highlights of the Singapore Night Festival this year, which will take place over the next two weekends - Aug 23 and 24, and Aug 30 and 31 - from 7pm to 2am. The annual festival was first organised in 2008.

Festival director Angelita Teo, who is also director of the National Museum of Singapore, said at a media preview yesterday that this year's festival is the largest so far, both in scale and content.

The festival grounds, traditionally covering the arts and heritage precinct in the Bras Basah and Bugis area, will be more extensive, reaching from Plaza Singapura to Raffles City. New venues include Chijmes and Sculpture Square.

There will be 89 arts and cultural programmes, up from 74 last year, including performances, installations, exhibitions and film screenings. More than 100 local performing groups and artists will take part in this year's festival, up from 43 last year, as well as nine international groups and artists.

Said Ms Teo: "The festival is a perfect platform for local talents to showcase their work. A number of them are also collaborating with the international performers."