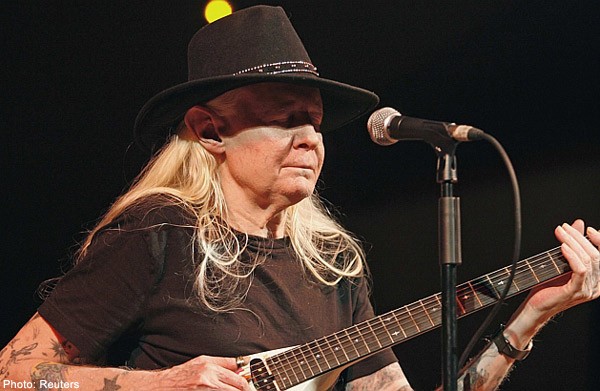 ZURICH - Johnny Winter, an American blues rock guitarist, vocalist and band leader best known for his virtuoso slide-guitar solos and raspy vocals, was found dead in a hotel room outside Zurich, the Swiss police said on Thursday. He was 70.

Along with his brother Edgar Winter, also a well known blues musician, the Texas-born Winter revered African-American blues tradition and began performing in his teens.

Winter, distinctive because he and brother Edgar were albino, broke into national fame in 1968, when Rolling Stone magazine dubbed him the hottest musician outside Janis Joplin.

In 1969, he played the Newport Jazz Festival, where he performed with B.B. King, one of his musical idols, and at Woodstock.

He also produced albums for his idol, Muddy Waters, in the 1970s, helping to burnish the reputation of the legendary bluesman.

Among Winter's best known songs was "Still Alive and Well", a blues rock stomper recorded after he resurfaced from heroin addiction in the 1970s.

A new Winter album, on which Eric Clapton and Ben Harper appear as guests, is set to be released on Sept 2. A boxed collections of his main tracks since the 1960s was released this year, complete with tributes from other performers who said he'd been a seminal influence on their careers.

In an interview with the New York Times earlier this year, Winter said he enjoyed touring and working with younger musicians. "I think about legacy a lot," he said. "Hopefully at the end of the day they say I was a good bluesman. That's all I want."

Winter was found dead overnight in a hotel room outside Zurich, according to a police spokesman. A prosecutor has ordered an autopsy because the cause of death is unclear.

There was no indication of third-party involvement, and early indications pointed to a medically related incident.