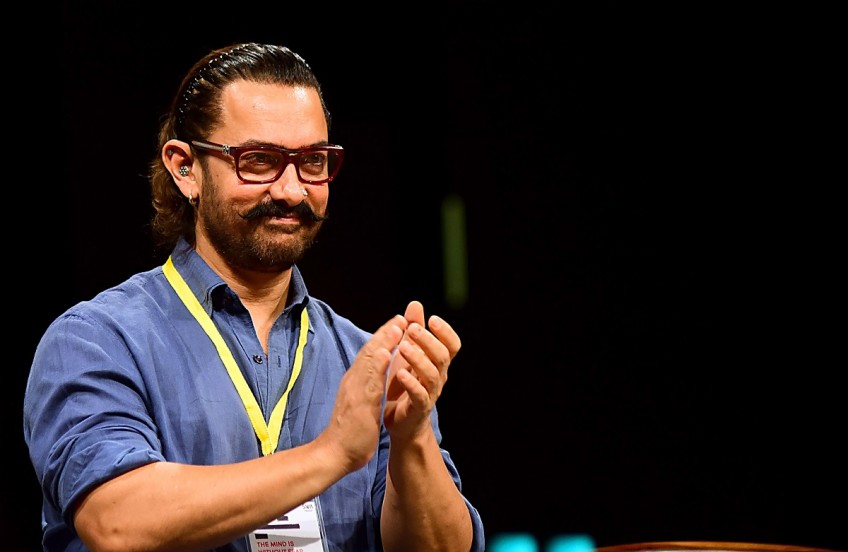 "I feel the deeper you go into our own culture, the more international the film will be," said Indian film star Aamir Khan at the 5th Annual Conference of the Taihu World Cultural Forum on Oct 17.

From Dangal to Secret Superstar to the latest Hichki, Bollywood hits have stirred up waves of popularity among Chinese moviegoers over recent years. Bollywood top actor Khan has cemented his major-celebrity status in China with social relevance.

According to him, people living anywhere in the world are emotionally involved. Be it national conditions or social background, people are touched by good stories.

"For instance, I cried after watching an Italian movie on World War II. Though I was not involved in that period, the movie manages to send me back to the tragic times and generated great empathy in me with those victims. Likewise, my interpretation of a stubborn, hard-bitten former wrestler in Dangal has made Chinese families aware about the great love of an Indian father for the daughter," the film star said.

Last year, his biographical sports film Dangal, inspired by the real journey of an Indian wrestler through a conservative landscape to turn his daughters into world-class athletes, made nearly 1.3 billion yuan ($188 million) in box office performance, marking the highest-grossing Indian film of all time in China.

"Many people get to know a certain country through watching their movies. Through my work, quite a few foreign viewers start to know the sorrows and happiness of ordinary Indian people. Also, they have found that some local humour and jokes can be understood by people from different cultural backgrounds," Khan said, adding that art creators are the bonds that connect the world together, allowing people of different cultures to understand each other.

Khan, who was born in the western Indian city of Mumbai, where Bollywood studios are located, began his career as a child actor in the film Yaadon Ki Baaraat in 1973.

"When I fall for the story is when I get drawn to a film script," Khan said. "My criteria in selecting a script involve not trying to estimate the audience's reaction, but determining whether the story touches him."

In his latest epic action-adventure film Thugs of Hindostan, the 53-year-old actor plays a small-time thug to infiltrate and counter the threat posed by a band of thugs led by Khudabaksh Azaad, played by another movie star Amitabh Bachchan, as he aspires to free the country from the British.

"I fully prepared for the film over the past year, and each character in my film means much to me," Khan said. "My face often looks totally different each time as I play a new role. Sometimes, I have to put weight and change the makeup, and I want to present the most authentic image to all the viewers."

During the forum, Khan also shared his views on the Sino-India film industry co-operation.

Khan said only a few Chinese films have been widely released in India, and most Indian viewers are still at the stage of Bruce Lee and his kung fu masterpieces.

Chinese film industry has undergone tremendous changes in past decades and he would like to see more Chinese films screened in his country to help locals get to know the culture and life of their neighbouring country.

Meanwhile, the film star also said that he was fond of the story of Wei Xiaobao, a rags-to-riches protagonist created by martial arts novelist Louis Cha for his classic The Deer and the Cauldron.

Set in the Qing Dynasty (1644-1911), the protagonist Wei is not a fantastic martial artist, but rather an antihero who relies on wit and cunning to get out of trouble. Also, in his opinion, Wei boasts a magical life journey with his seven wives, a channeling role he would like to take a try, if possible.

"When I read stories like this, I always have some new ideas on film production. Just like I said before, good stories can bring us closer," said Khan.